Scots drink more than English and Welsh New analysis of sales figures, conducted by Nielsen for the Scottish Government, show that Scots drink an average of 11.8 litres of pure alcohol per adult, per year compared with 9.9 litres in England and Wales (2007 figures). Both north and south of the border, the figures remained… Read more » 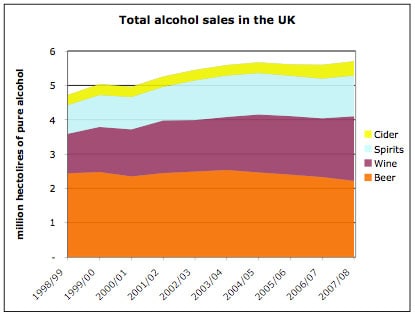 UK Alcohol Sales Rise The total quantity of alcohol sold in the UK rose by 1.8% in the financial year 2007/08, reversing falls of the previous two years. Measured in million hectolitres of pure alcohol, a measure that takes account of different strengths of drinks, the total alcohol sold in 2007/08 was 5.7m hl. The… Read more »

Major Government Reviews on Alcohol The government has published reviews on the effectiveness of self-regulation of the alcohol industry, labelling, the effects of pricing and promotion on consumption and harm, and the cost of alcohol to the NHS. These are available here…. Read more »

Industry voluntary code “Not fit for purpose” A report commissioned by the government has found that self-regulation of the alcohol industry is failing to uphold voluntarily-agreed standards. “In the current trading climate the commercial imperative generally overrides adherence” to the code, it says. The study, conducted by KPMG, was commissioned by the government to evaluate… Read more »

UK CMO recommends zero alcohol limit for young drivers In his annual report, the Chief Medical Officer, Sir Liam Donaldson, recommended ‘effectively a zero limit’ of 0.02g of alcohol per litre of blood for young and novice drivers. This recommendation is based on considerable evidence that young drivers are more affected by alcohol than older,… Read more »

Depression linked to moderate drinking A new study on mice has found that two weeks’ abstinence following ‘moderate’ drinking (not enough to produce dependence) lead to depression-like behaviour. This has been widely reported as evidence that drinking protects against depression, but this is like saying that the way to avoid hangovers is to keep drinking…. Read more »

Alcohol in Scotland Three reports have been published giving statistics for alcohol consumption and health consequences in Scotland.  The first of these, “How much are people in Scotland really drinking?” is an examination of the validity of the national surveys of drinking behaviour. Four such surveys are addressed by the report: the Scottish Health Survey… Read more » 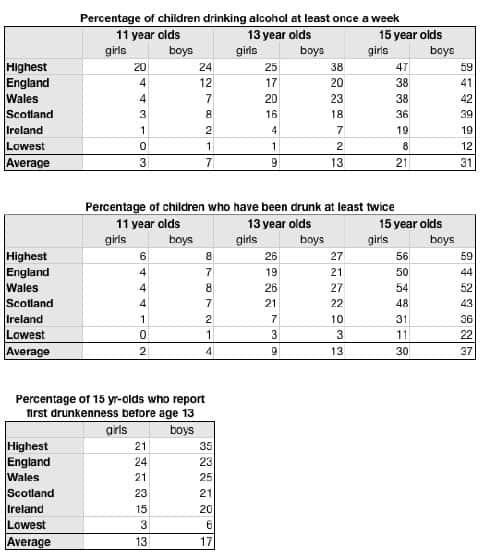 WHO report on Health Behaviour in School-aged Children The World Health Organisation has published a report on health behaviour in 11-15 year-olds in Europe and North America. Regarding alcohol, three measures were taken; frequency of drinking, incidence of drunkenness and (for 15 year-olds only) whether they had been drunk before the age of 13. For… Read more »