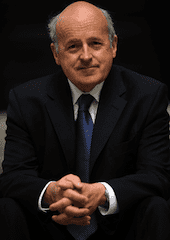 Jonathan Shepherd CBE FMedSci is professor of Oral and Maxillofacial Surgery, founder of the Violence Research Group, and co-founder of the Crime and Security Research Institute at Cardiff University.

His research on clinical decisions, community violence and alcohol harms have had substantial impact on practice, policy and legislation. Prompted by his discoveries, he led the development of a prototype Community Safety Partnership which was used as a model in the Crime and Disorder Act which mandated the creation of such partnerships across Great Britain.

He initiated and developed the pioneering Universities’ Police Science Institute in Wales, and the information sharing “Cardiff Model” for violence prevention which was adopted by the WHO in 2005 and has been implemented across the UK and in cites in the United States, Australia and other countries. He also developed a comprehensive care pathway for people harmed by violence and led the development of new standards published by the Royal College of Psychiatrists, the Royal College of Emergency Medicine and the Royal College of Surgeons of England.

His proposal for an independent professional body for policing, was taken up by the UK government and the new College of Policing was launched in 2013, underpinned by primary legislation. He was instrumental in the formation of the national Probation Institute in 2014.

His surveys, laboratory work and field experiments on glass injury resulted in a switch to toughened glassware and polycarbonate alternatives in the UK licensed trade. His research and advocacy prompted the historic first National Institute for Clinical Excellence (NICE) technology appraisal and guidance in 2000.

He won the 2008 Stockholm Criminology Prize (the first UK recipient of what The Times described as “the equivalent of a Nobel prize”) and his research group won Cardiff University a 2009 Queen’s Prize.

He contributed to the Domestic Violence (Wales) Bill and spoke for the NHS at the 2012 launch of the white paper. He initiated the professions summit series including the 2013 summit on evidence informed practice chaired by Lord O’Donnell. He initiated and drafted the Evidence Declaration signed by 27 professional bodies at the Royal Society in 2017 and also initiated the new Bazalgette Professorship for research translation in public health, first awarded in 2019.

He is a member of the Home Office Science Advisory Council and the What Works Council at the UK Cabinet Office.