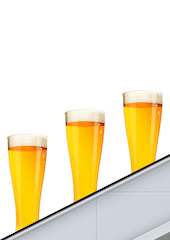 Last Thursday, the British Beer and Pub Association (BBPA), alongside the Campaign for Real Ale and the Society for Independent Brewers, released an account of the last eight years of beer taxes. The title of the pamphlet, “From a bleak future to confidence and stability” summarises the argument well. On the BBPA’s telling, the period between 2008 and 2012, when the ‘duty escalator’ raised tax on beer by 2% above inflation, was catastrophic, as the Government pursed a “devastating and largely self-defeating policy”. By contrast, since 2013, the three successive cuts to beer duty, followed by a freeze in 2016, revitalising the pub sector (at least as the BBPA sees it).

Produced by an organisation whose purpose is to lobby the government on behalf of breweries and pubs, it is unsurprising that the report is at best a partial version of events. Here are some of the facts that the BBPA conveniently omitted:

It is common sense, borne out by evidence, that raising the price of alcohol reduces drinking, and this, in turn reduces death and disease. It is highly likely therefore that the duty escalator saved lives. While nobody has yet provided a rigorous estimate of the full effect, one analysis found that duty cuts to all alcohol in the 2015 Budget alone are likely to lead to an additional 6,500 hospitalisations a year. The duty escalator almost certainly played a part in alcohol-related mortality in England falling from 48.7 per 100,000 in 2008 to 45.6 in 2012, with progress stalling thereafter (though the trend in hospitalisations is less clear).

The BBPA’s report reads as though beer drinking occurs only in pubs, even though the majority of beer is purchased from supermarkets and off-licenses. As I have previously argued, the duty escalator is the only period in recent history when the growth of the gulf in price between pub and supermarket beer slowed, and with it the trend away from drinking in pubs. Again, this should not be surprising – to crudely oversimplify, people buy beer from supermarkets because it is cheap, and they buy it from pubs for the social experience. Consequently, if you reduce the price of beer, people buy much more beer from supermarkets than from pubs: twice as much, according to HMRC’s estimates.

Duty cuts have not restored the pub sector to health

Despite the BBPA’s glowing talk of the scrapping of the beer duty escalator leading to “a surge of confidence in the sector”, beer consumption in pubs remains in long-term decline. The BBPA is correct to note that beer consumption has risen in the past couple of years, but they neglect to mention that this is driven by the off-trade. On-trade beer consumption has fallen for each of the last fifteen years, regardless of the tax regime. There is a debate to be had whether the government can and should resist this trend or whether it is inevitable, but it is simply false to imagine that the recent cuts to duty have nullified the fundamental structural threats to the sector. 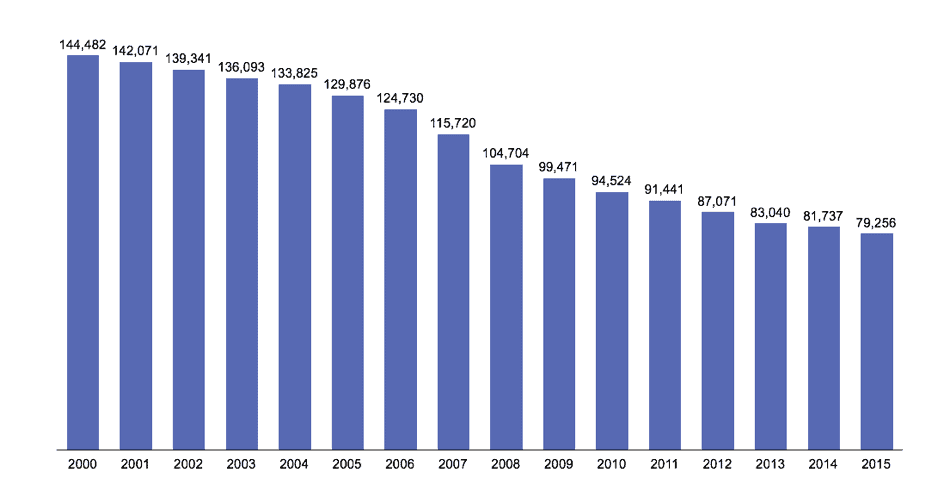 The BBPA suggest 75,000 pub jobs were lost between 2008 and 2012. This seems on the high side, since the ONS’ Annual Business Survey suggests that there were 61,000 fewer jobs over that period in ‘beverage serving activities’ as a whole, which includes bars and clubs as well as pubs. In any case, the vast majority of these appear to be part-time positions. The ONS’ Business Register and Employment Survey finds that while part time employment in pubs fell by 56,000 between 2009 and 2012, full time employment actually increased by 5,000 over the period.*

The duty escalator raised a lot of money

The BBPA dismisses the rise in beer duty as “largely self-defeating” from a revenue perspective since it raised “only 12%” more in 2012 than 2008.** Yet the chart below shows that by recent standards, this is a relatively good return – any sort of revenue growth has become increasingly rare for the Treasury. Moreover, revenue has declined since beer duty was cut, despite much-vaunted rise in consumption. 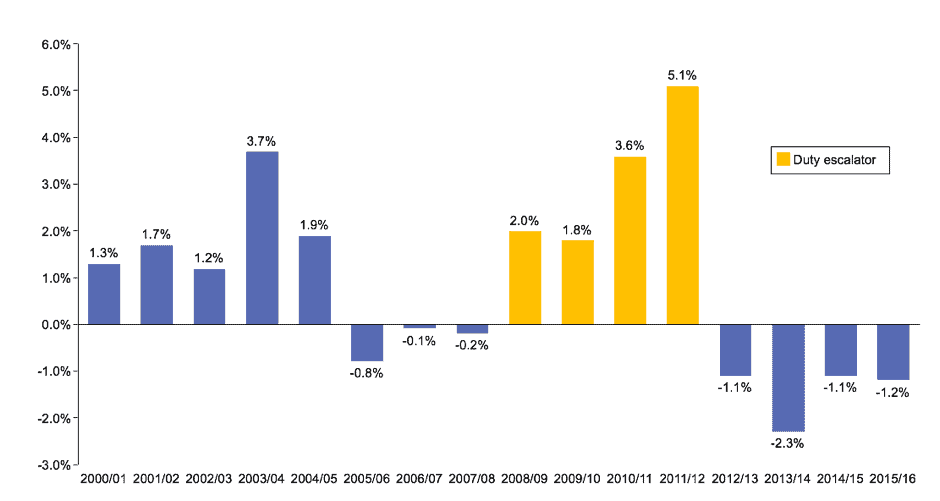 In fact, by the Treasury’s own estimates, scrapping the duty escalator has been an expensive policy. Taking beer, wine, spirit and cider duty together, cuts and freezes since 2013 will cost the public finances £770 million in 2016/17 and £2.9 billion over five years.

There is not space here to rebut every one of the BBPA’s points in detail, but the overall point should be clear. Far from being a blunder, the duty escalator did a lot of good, saving lives and raising money. Far from saving the pub, ending the duty escalator has helped supermarkets to prosper while pubs continue their ongoing decline. The duty escalator is not a pantomime villain, and the BBPA is wrong to portray it as such.

* Changes in methodology mean that we cannot compare the 2008 and 2012 numbers, although this is unlikely to change the story since the Annual Business Survey suggests overall employment in the sector rose between 2008 and 2009.