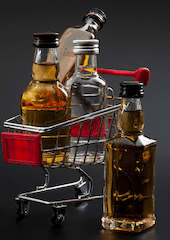 It is now 12 months since minimum unit pricing (MUP) came into force in Scotland. Naturally, people are eager to know whether it is working. Unfortunately, robust and reliable data analysis takes time, and the team carrying out the official evaluation of the policy won’t be publishing any findings until the end of the year. That has created a vacuum, which has been filled with speculation and fragmentary information. A number of media outlets have reported that alcohol sales in Scotland have increased since MUP was introduced, and while supporters of the policy have urged patience to see the full picture, many commentators seem to have concluded already that the policy is a failure. For example, Annie Wells, Scottish Conservative public health spokeswoman has said that “if it continues to be ineffective, it will have to be revoked”.

I don’t doubt that a ‘wait and see’ policy is sensible, and I am sure that we will know a lot more about the impact of MUP in six months’ time. But it is also rather unsatisfying. The data that has been drip fed to the press is selective and incomplete, but it must tell us something. The headlines branding MUP as ineffective may be premature, but they are not based on nothing – how strong is their case against the policy?

In this post, I will review the data that has been made public on alcohol sales since MUP was introduced to see what it tells us about the effects of the policy so far. This is not straightforward: media reports are often unclear as to what precisely they are reporting and how it is calculated. Moreover, the data tends to have been presented in a negative light. All the same, there are a few messages we can pick out:

Scots are spending more on alcohol under MUP, but this is how the policy is meant to work

This is entirely unsurprising – since MUP involves a substantial increase in prices, we would expect spending on alcohol to go up if the policy works as intended. The more relevant question is whether it is causing people to drink less alcohol.

‘Natural volume’ sales in Scotland rose immediately after MUP came into force, but may have fallen since

‘Natural volume’ refers to the amount of liquid sold, irrespective of alcohol content. Natural volume counts a litre of 4% ABV cider, a litre of 7.5% ABV cider and a litre of 37.5% ABV vodka all the same. There are a number of reports to indicate that natural volume sales rose in the months after MUP was introduced. The most reliable source of data here comes from retailer till scans, and is collected by the market research firms Nielsen and IRI (although till scan data does have its blind spots – in particular, it does not cover Aldi, Lidl and independent retailers). The cider producer Aston Manor (the firm perhaps most negatively affected by MUP) has released figures, apparently taken from IRI scan data, which show that natural volume sales were 4% higher in Scotland in May-October 2018, compared to May-October 2017. Nielsen have not yet published their till scan data (this will be the basis of the official evaluation), but have released data from a separate household purchasing survey. They found that in the first three months post-MUP, sales rose 4% year-on-year (the exact same figure as IRI, albeit over a shorter period).

This initial rise in alcohol sales in Scotland in summer 2018 has been attributed to factors such as the hot summer and the football World Cup. And as these theories would suggest, natural volume sales have grown by far less over the winter, and may even have fallen. IRI data reported in Drinks Retailing News show that beer and cider natural volume sales fell by 3.2% year-on-year in the 12 weeks to February 2019. It is unclear whether this was offset by any growth in wine and spirit sales. In recent months, Nielsen analysts have described natural volume sales for all alcohol in Scotland as “almost flat”. According to The Times, Nielsen data shows that natural volume sales in Scotland rose by 1.8 million litres in the 46 weeks to March 2019 to 203.5 million litres. This equates to a percentage increase of 0.9%, which indicates a clear slowing down since last July. It is not clear whether the 0.9% figure is directly comparable with the 4% growth reported from earlier Nielsen data. If we assume that it is, and assume that 25% of alcohol sales in the 46 week period took place in that initial three months (as is consistent with tax clearances), then this would imply that natural volume sales in Scotland have fallen by 0.1% year-on-year in the period August to March.

It is important to note that both Nielsen and IRI’s data covers only the off-trade, and so does not account for any possible impact MUP might have had on the on-trade (pubs, bars, restaurants, hotels).

Unit sales do not appear to be dramatically different from natural volume sales, but there is some evidence that unit sales have grown by less

What we care about from a health perspective is the amount of alcohol people are consuming, not the volume of liquid they drink. Fundamental to the design of MUP (the reason why it is a minimum unit price, rather than just a minimum price) is to encourage a shift away from stronger drinks. Thus the number of units sold is a more useful indicator than natural volumes. Unfortunately, most media reports have not provided unit sales figures.

This past weekend, Aston Manor released IRI data to the Mail on Sunday, showing that in the first 40 weeks since MUP was introduced, 25.2 million more units of alcohol were sold than in the off-trade compared to the same period the year before, representing a 1% increase. This is of a similar magnitude to the increase in natural volumes reported by Nielsen (0.9%), indicating that growth in unit sales will not be dramatically different to natural volume sales. This is somewhat surprising, since, as noted, an objective of MUP is to shift consumption to lower strength drinks. However, it is important to note that the two data sources are not directly comparable. First, IRI may have a higher estimate for sales growth (given that IRI estimated natural volume growth to 4% in the first six months, Nielsen only for the first three months). Second, IRI’s 1% units figure relates to 40 weeks, Nielsen’s 0.9% natural volumes figure to 46 weeks. If growth has indeed slowed, we would expect IRI’s 1% to have declined further by 46 weeks.[*]

The Retail Data Partnership has also published unit sales data taken from till scans, but only for a sample of convenience stores (so not supermarkets). Their data shows that in the period May-July, unit sales rose by just 0.1%. This figure applies only to a small portion of the market, but as noted above spending growth in convenience stores appears to have been higher than the market as a whole (15% vs 14% for Nielsen and 11% for IRI), so there is no obvious reason to think that the overall figure should be much lower.

Putting these together with the natural volume sales estimates, they indicate that total unit sales in Scotland may have risen after the introduction of MUP, but perhaps by slightly less than natural volumes. Unit sales may have flattened or declined in recent months.

We only have aggregate population sales data, which does not tell us all we need to know

All of the data discussed so far relate to Scotland as a whole, but this may be misleading. First, it does not account for population growth – the increase in the number of adult drinkers can be over 0.5% in some years, which will mean per capita consumption is lower. Second, probably more importantly, it does not tell us how different sub-groups of the population are responding. If MUP leads to a reduction in heavy drinkers’ consumption, but not lighter drinkers, that is clearly better than the other way around. For now, we have no evidence either way.

Alcohol sales appear to have risen by more in England than in Scotland, indicating a positive effect of MUP

To this point, I have only been trying to establish what has happened to alcohol sales in Scotland in the past year. Yet isolating the direct impact of MUP requires us to separate the effect of MUP from the various other factors that influence alcohol consumption: as we have seen, the weather, sporting events and population growth may matter too. This is why causal inference is so difficult. The official MUP evaluation is likely to use England as a counterfactual, assuming that aside from the implementation MUP, England and Scotland face similar underlying trends.

Most reported data does not provide comparable figures for England and Scotland, but it is striking that where such comparisons are made, sales in Scotland are considerably lower. Nielsen claim that natural volume sales in England and Wales grew by 7% in the first three months post-MUP – since the comparable figure was 4% for Scotland, that suggests MUP reduced sales by 3%. IRI find that beer and cider natural volumes rose by 1.3% in the rest of the UK in the 12 weeks to February 2019, compared to a 3.2% decline in Scotland – that would suggest a 4.5% decline due to MUP (though remember that this may be offset by wine and spirit sales).

On the basis of the evidence that is currently publicly available, here is my best assessment what has happened to alcohol sales in Scotland since MUP was introduced:

None of this indicates to me that MUP has been a clear and obvious failure. It suggests that MUP restrained alcohol consumption over a period when it would otherwise have risen and may yet bring about reductions in consumption. Either way, if MUP had this effect on the heavier drinking population, it will have reduced health harms and saved lives. Over the coming months and years, as we get more transparent data and rigorous analysis, we will have a better idea.

[*] I have not been able to find this reported anywhere else, but Simon Russell of Inside Media has claimed on Twitter to have seen the Aston Manor/IRI sales figures and that these showed an increase of 17 million units in the first six months since MUP was introduced. This equates to around a 1% year-on-year increase. If correct, this would imply that there has not, in fact, been a slowdown in sales growth between November and February. However, I am reluctant to put too much weight on this evidence: a) because I cannot verify the source; b) because it implies what I believe is an implausibly large gap between natural volume sales growth (4%) and unit sales growth (1%)

Written by Aveek Bhattacharya, policy analyst at the Institute of Alcohol Studies.