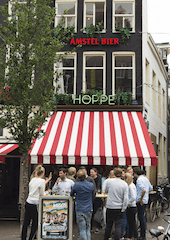 The typical Dutch “polder-approach” was chosen: all interested parties are allowed to join, in an attempt to get consensus, with the government as (almost impartial) chairman. So, not only the health organisations but also all economic stakeholders were invited to the ‘obesity table’ and the ‘alcohol table’. Because of the Framework Convention on Tobacco Control (FCTC), it is forbidden to speak with the tobacco industry as a government. Therefore, the tobacco industry was not sitting at the smoking table. At the alcohol table, however, the alcohol industry, the liquor stores, the supermarkets and the catering industry participate fully.

After more than one-and-a-half years of talking, the package of projects and measures on problematic alcohol consumption was – as could be expected – meagre. The drinks industry, and certainly also the supermarkets, have managed to block open discussions about topics such as availability, advertising and price policies that are sensitive to them, arguing, among other things, that the Prevention Agreement is not intended to prepare legislative measures. As a compromise, it was decided to start various educational projects and to conduct a lot of research. A well-known trick to delay the introduction of real measures.

The most concrete research project concerns a study into the value of a Minimum Unit Price for alcohol (MUP), for the Netherlands. The MUP introduced in Scotland in 2018 serves as a stimulating example. The study of the effects of MUP was carried out by the Trimbos Institute and the RIVM (The National Institute for Public Health and the Environment). Both organisations were highly motivated to conduct this study in depth and analysed all available research and practical experience, not only from Scotland but also from some other countries. The conclusion is very clear: MUP will be able to contribute significantly to the reduction of problematic alcohol consumption in the Netherlands. Exactly in line with the formal goal of the Prevention Agreement!

It seems that even the most liberal politicians in the Netherlands can no longer ignore MUP. And if MUP is actually introduced, this means a huge breakthrough: it is one of the very few evidence-based measures with regard to alcohol policy for many years. It fits in with the historical measures, such as a compulsory age checks (2000), a ban on alcohol advertising between 6am and 9pm on radio and TV (2009) and the introduction of a single age limit of 18 years for on and off premise purchases (2014).

But we are not there yet: there will first be another study of MUP in which, among other things, it will be concretely investigated what the level of MUP could be in the Netherlands and what effects this would have. In addition, a stakeholder analysis will appear that provides insight into the position of stakeholders and their importance in the implementation of MUP in the Netherlands. We do not yet know what this study will recommend. What we do know is that certain beer brands in the Netherlands have been sold for years at very low prices in the supermarket (for instance Pitt beer 5% ABV costs €0,70 (63p) per litre (= 6.25 UK units) which makes the urgency of the introduction of MUP in the Netherlands very obvious. You may wonder which political party will dare to oppose this!

The question also remains: when will the proposal for MUP be discussed in Parliament? It won’t be this year. And it is also uncertain whether State Secretary Paul Blokhuis, who has set the alcohol table and is personally very committed to MUP, will return after the 2021 elections.

Nevertheless, I am personally convinced that the Dutch MUP will be created. The lobby for effective alcohol measures has recently become stronger in the Netherlands: the main health organizations are increasingly working together on the alcohol lobby and are now united in AAN – the Dutch Alcohol Policy Alliance – and that gives hope for a Dutch MUP.