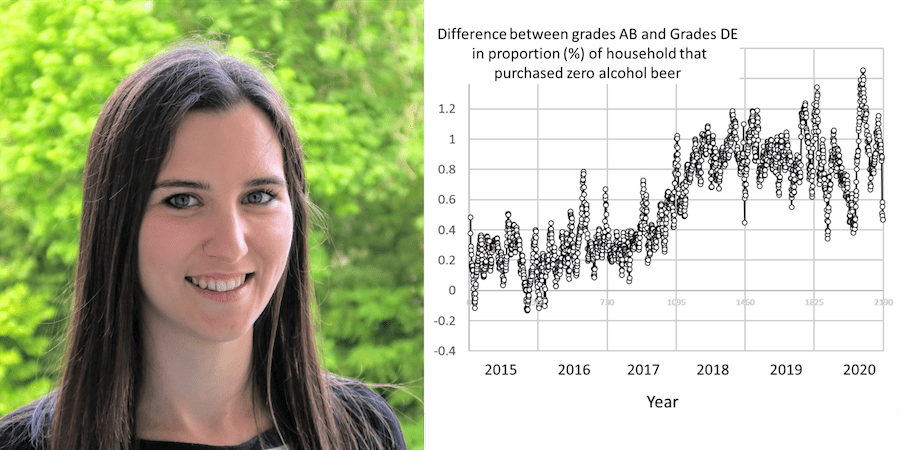 There is an increasing buzz about zero and low alcohol products in the UK. While concerns related to their labelling and marketing have been expressed by the public health advocates, the UK Government committed to working with the drinks industry to “deliver a significant increase in the availability of alcohol-free and low alcohol products by 2025” in its consultation document: ‘Advancing our health: prevention in the 2020s’.

Our research team has previously shown that the introduction of new lower strength beers resulted in British households purchasing fewer grams of ethanol overall. But there is very little information available on factors influencing their purchase and consumption – or in short, who buys and drinks zero and low alcohol alternatives?

What did we investigate?

How did we do that?

We used two data sources by Kantar, a market research agency. One source was British household purchase data by a shopping panel of almost 80,000 households, collected between 2015 and 2020. Another source was a diary survey of the previous week’s alcohol consumption, completed by almost 105,000 people between 2015 and 2018.

According to the shopping data, the following households were more likely to buy zero alcohol beers:

The survey data showed similar characteristics of zero alcohol consumers; the only difference was that they were more likely to be from the deprived residential areas.

Those more likely to buy low alcohol beer were also buying more alcohol and beer overall, but were more likely to be middle age (45-64 years). Unlike for zero alcohol, there was no consistent pattern by household income, social grade, level of residential deprivation. There was also no consistent pattern by region of Great Britain in purchase or consumption of zero or low alcohol beer.

What does this mean?

Given the amount of policy focus that zero and low alcohol drinks are given in Great Britain, one may get the impression that their consumption is very high. But our study shows that while household purchase data points to an increasing trend in buying zero alcohol beer between 2015 and 2020, in absolute terms the amount of people buying it is still very low (under 1%).

Our study also suggests that the British population that is more likely to buy and drink zero alcohol beer is younger and more socio-economically advantaged in terms of education and income. In a culture as wet as the UK, any part of the population drinking less will be beneficial, and greater availability of zero and low alcohol drinks might be welcome in the (newly) health-conscious well-off part of the population.

But this reminds us also that any policy focus on zero and low alcohol drinks should be counterbalanced by the policies aiming to reduce health inequalities and reduce alcohol-related harm in disadvantaged populations – ideally going beyond only focusing on alcohol, also taking into account approaches addressing social determinants of health.

The lead author of the article “Is Buying and Drinking Zero and Low Alcohol Beer a Higher Socioeconomic Phenomenon?” Prof Peter Anderson has, within the last five years, received financial support from AB InBev Foundation outside of the submitted work. The raw data for this study was provided free of charge to Newcastle University by Kantar Worldpanel. Subsequently, Ab InBev reimbursed Kantar Worldpanel to cover the costs of this data.