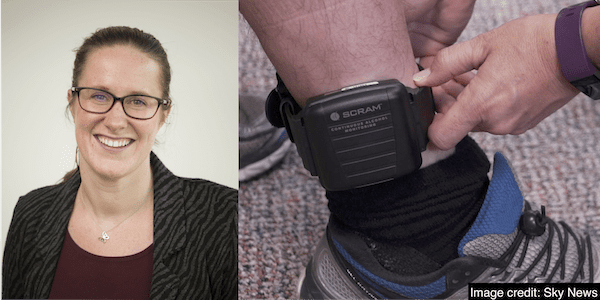 What are alcohol monitoring tags?

Alcohol monitoring tags – or ‘transdermal alcohol monitoring devices’ as they are formally known – monitor alcohol levels in sweat and are used to monitor compliance with court-ordered sobriety. They represent a coerced alcohol abstinence strategy – backed up with the threat of further court hearings and/or imprisonment. Their use in England and Wales is provided for in the Legal Aid, Sentencing and Punishment of Offenders Act 2012 which allows for an additional sentencing requirement to be attached to a community or suspended sentence requiring an offender to abstain from alcohol (for up to 120 days). This is known as an Alcohol Abstinence Monitoring Requirement (AAMR) and can be imposed by the courts for alcohol-related offences committed by non-dependent drinkers.

AAMRs are used for offences such as common assault and actual bodily harm and were initially introduced in response to high levels of alcohol-related violence despite little evidence they would reduce offending  – especially in the case of intoxication-related rather than intoxication-specific offences. Since piloting in some areas, AAMRs were rolled out nationally in 2020. And alcohol monitoring tags have made the headlines again more recently (November 2021) as these have now also been made available for prison leavers ‘known to reoffend after drinking’.

Breaching an AAMR can result in an individual returning to court to face the prospect of further sanctions, ranging “from a fine, extending the length of the order or in some cases imprisonment”. This presents challenges to tailoring sentences appropriately (known to be central to their effectiveness) and developing effective therapeutic alliances and working relationships between probation worker and service-user which are both at odds with blanket coercive interventions. They are also a potential further drain on stretched probation and court resources.

What are the concerns?

Their use raises moral questions about the role of coercion in treating alcohol consumption and misuse. In our earlier work, a colleague and I argued that dealing with alcohol related offenders in such coercive frameworks unduly draws them and their alcohol consumption further into the criminal justice system – rather than tackling the underlying health and social problems or acknowledging the widespread availability and cultural positioning of alcohol in British society. Moreover, such punitive measures disproportionately target particular populations, such as young males and those from more deprived backgrounds. Nor do such coercive strategies do much to address the political–economic context that feeds the problem.

In the latest proposals, alcohol monitoring tags will be used for offenders coming out of prison under Probation Service supervision in Wales to enforce sobriety or monitor drinking levels (because their risk of reoffending increases after heavy consumption) for up to a year. And used for “serious and prolific offenders […] if their probation officer thinks they will be more likely to reoffend when drinking.” These have currently been made available in Wales and the plan is to roll out the scheme in England next summer.

So, not only are there questions about the relevance of the alcohol intoxication in offending, the coercive enforcement of sobriety, but also ethical questions relating to imposing drinking restrictions (which are otherwise legal) for potential prospective offending and how these risks are to be gauged. Whilst the alcohol use of those released from prison may be deemed a threat to public safety, this may constitute dispensing punishment for which people have not been sentenced for.

There is little doubt this is a reactionary policy that does not address the upstream sources of problematic alcohol consumption resulting in criminal justice contact or the number of people initially engaging in alcohol-fuelled crime. Moreover, the quality of evidence upon which this decision rests is not conclusive. It stems mostly from an evaluation of the AAMR over a two-year period (April 2016-March 2018) in London, which boasts 94% compliance (Hobson et al. 2018). A focus on compliance – in terms of alcohol-free days – is somewhat of a smokescreen as what is needed is evidence of whether drinking and related offending are reduced in the long term after tag removal, which is yet to be provided. In the former study, of those subject to AAMR in the area only just under half (45%) were surveyed about their experiences on receiving the tag, and just under half (49%) were surveyed upon removal of the tag. It is conceivable that those volunteering to participate are systematically different to those refusing – especially as participation was voluntary. Thus, as others note, the final sample may not be representative of all those subject to the AAMR. Indeed, upon tag removal some may be subject to further criminal justice proceedings and potentially more disinclined to oblige. Importantly, the same individuals were not surveyed upon receipt and removal of the tag (longitudinal follow up) which also compromises the research design to attribute any change in behaviours and experiences to the AARM itself.

This renewed emphasis on a criminal justice approach is at odds with the public health approach advocated in commissioning of Violence Reduction Units (VRUs) tasked with adopting a public health approach to violence prevention. Indeed, back in 2015 I wrote an article in the Probation journal with colleague Rose Broad in which we question whether alcohol use is meaningfully dealt with as a criminal justice issue. Therein we commented that:

“The policy trend for dealing with the general population is to address alcohol as a health issue. However, it seems that for offending populations, and promoting their longer-term sobriety, there is a move towards more coercive measures. There thus remains some confusion about how this disparity is reconciled when dealing with criminal populations alongside the contradictory policy forces of deregulation and criminalization. This is a particular issue when the evidence base points to the effectiveness of policies regulating alcohol availability and the environment in which alcohol is marketed as being some of the most effective in reducing alcohol-related harm (Alcohol Health Alliance, 2013; Anderson et al., 2009; Babor et al., 2010; Österberg, 2012).”

In this piece we noted that whilst such coercive measures may seem attractive at face value and when resources are scarce, they do not meaningful address overlap with and integrate other economic, crime prevention and public health policy. Nor do they adequately acknowledge that dichotomies concerning those suffering from addiction, as opposed to seemingly ‘irresponsible’ voluntary consumption, are somewhat arbitrary distinctions as alcohol consumption is known to be a matter of degree and affect different people differently in terms of health harms and social impacts.

In sum, alcohol monitoring tags are certainly not without controversy. And there are several outstanding considerations concerning the efficacy and impact of ‘alcohol tags’, including, but not limited to: