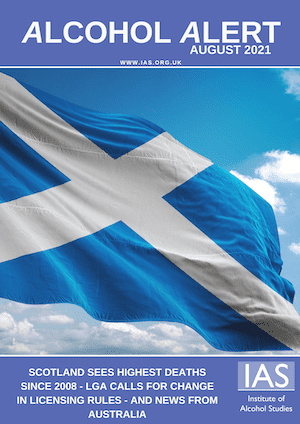 On 30 September, 14:00-15:00 BST, we are hosting a webinar to launch the new publication ‘Alcohol marketing during the 2020 Six Nations Championship’, which looks at: 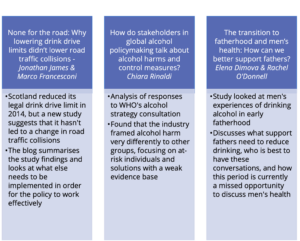 This represents the highest number of deaths since 2008 and reverses the downward trend of alcohol-specific deaths that Scotland had been seeing. 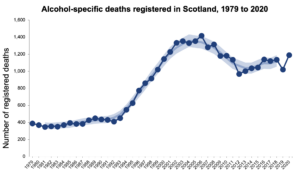 Those living in the most deprived areas of the country were 4.1 times more likely to die and men were more than twice as likely to die. The following chart shows the marked increase in male deaths, compared to the relatively unchanged number of women dying.

2019 saw a drop in alcohol-specific deaths, which is widely attributed to the introduction of minimum unit pricing (MUP) in May 2018.

Elinor Jayne, Director of Scottish Health Action on Alcohol Problems (SHAAP), rightly drew attention to the fact that these deaths mean that “colleagues, friends, family, [and] partners now have the burden of their grief to struggle with”.

Both Ms Jayne and Alison Douglas, Chief Executive of Alcohol Focus Scotland, reiterate the policy demands that public health campaigners and researchers have previously called for:

Jayne also called for alcohol availability to be reconsidered:

“Let’s look at models in countries such as Sweden and Canada where alcohol is sold in designated alcohol stores rather than in supermarkets and convenience stores.”

Those in opposition to the Scottish National Party (SNP) were quick to berate the government for the rise in deaths.

“Scotland has a real problem with treating addiction that has grown far worse since the SNP came to power. The Scottish Conservatives are developing plans for a Right to Recovery Bill alongside frontline experts, so that more people can immediately access the drug or alcohol addiction treatment they need. We urge the SNP Government to take the decisive action that is necessary and back our bill.”

“We need to recognise the role that poverty and mental health play in this, providing earlier treatment and support where it is needed. There also still needs to be action on the marketing and promotion of alcohol and a reassessment of the minimum unit price.”

Record alcohol and drug deaths in the UK

England and Wales saw a record number of 11,000 deaths from alcohol and drugs in 2020. With Scotland’s recent alcohol data adding to that, many are suggesting that policies and treatment services aren’t doing enough to help.

Reported by The Independent, data from the House of Commons Library show that only 10 of over 300 English councils have been able to increase spending on alcohol and drug services.

Other councils, including South Tyneside and Wiltshire, have had cuts of over 40% to services.

These figures come at the same time it was reported that since the pandemic the number of people in England drinking over 50 units a week increased from 1.5 million to almost 2.5 million.

“The impact of the Covid pandemic on alcohol use has been devastating and is a stark warning for the Government.”

MPs Dan Carden and Christian Wakeford, who sit on opposite sides of the House of Commons, have been working together to raise awareness of alcohol harm in the UK. They spoke to ITV News about the shocking alcohol death data that has emerged recently.

“I think my burning question is – if these are the ones we know about, how many more? How many are crying out for help and not being able to get it? And that to me is something we fundamentally need to change.”

Both MPs sit on the All Party Parliamentary Group on Alcohol Harm, which as well as recommending that the Government tackles the availability of cheap alcohol and improves labelling, also calls for better support and treatment.

One of the major issues the Government consistently faces is pressure from the alcohol industry when trying to improve public health policies, often backing down due to the argument that the economy will be negatively affected by such policies. However this argument has frequently been shown to be a false economy due to the net-negative financial impact that alcohol has on society.

The Local Government Association (LGA) – the body that represents local councils – has called for public health issues to be a “legal requirement” when councils grant licences for pubs, clubs, bars and restaurants.

In a press release the LGA said it is “vital to protect communities from harm, reduce NHS costs and save lives”. Alcohol-related harm is estimated to cost the NHS in England, Scotland and Wales almost £4billion a year.

Annual estimated costs of alcohol harm to the NHS, 2006-07

The measure would update the Licensing Act to include a public health objective and allow for action against premises that fail to protect the health of the community.

As it stands, councils can only consider four issues: the prevention of crime and disorder; public safety; prevention of public nuisance; and protection of children from harm. The change would allow them to consider whether granting a licence would exacerbate existing public health issues, such as alcohol-related hospital admissions.

Councillor Nesil Caliskan, Chair of the LGA’s Safer and Stronger Communities Board, said:

“The last year has shown us the importance of businesses taking measures to protect public health, yet currently councils are specifically discouraged from using the Licensing Act to consider public health issues. Councils do not want powers to refuse every application. But being able to consider the public health impact of new licensed premises would allow them to take a more balanced view in line with their other priorities such as creating vibrant and safe town centres and protecting people from harm.”

“This suggested licensing change would hit small businesses disproportionately. Perhaps a period of allowing small business hospitality to recover after an exceptionally difficult 18 months is in order.”

The Government has said it will respond in due course, and that “Directors of public health are responsible authorities which means that they must be given notice of all licence applications and can make representations about any that raise concerns relevant to the four licensing objectives.”

The digital campaign was developed by the company’s CSR wing – the ‘Responsible Party’ – whose aim is to promote “responsible alcohol consumption and combat binge drinking among young adults in Europe and beyond”.

The advert itself shows dramatised clips of inebriated people falling over and passing out, with the line ‘Drink More’ repeatedly flashing up, before it eventually says: ‘Drink More…Water’.

Nudges steer people toward certain options, and ‘dark nudges’ encourage the consumption of harmful products, such as alcohol or gambling.

In the 2020 publication ‘Dark Nudges and Sludge in Big Alcohol’, the authors looked into the alcohol industry’s CSR activities and found it is rife with ‘dark nudges’.

This new Pernod Ricard advert and CSR activity can be seen as a clear example of a dark nudge and what the authors describe as “priming drinkers by offering verbal and pictorial cues to drink, while simultaneously appearing to warn about alcohol harms”.

The study also highlighted that CSR activity often misrepresents alcohol harm by highlighting apparent social benefits whilst making information on alcohol harm difficult to access. On the ‘Responsible Party’s’ ‘Drink More’ website, there is no explicit statement encouraging people to consume less alcohol as a way of reducing harm. Instead it says its aim is to combat binge drinking and mentions moderation towards the end of the page.

The study authors conclude that:

“reducing, removing, and mitigating the impact of dark nudges should be an important priority for public health policy”. And that “public health policymakers and practitioners also need to consider whether there is a role for sanctions for making misleading and false health claims on alcohol and other harmful commodity industry websites”.

Regulations and youth drinking in Australia

The Cancer Council Western Australia drew attention to the “world of opportunities” for alcohol companies to market their products, especially on social media platforms that are not open to public scrutiny.

The group’s recent research found that 28% of alcohol brand accounts on Instagram had no age-restriction controls. The authors write that of the three top wine and spirits companies, only one of each had controls across all their accounts.

This highlights the more hidden ways that alcohol continues to be promoted to children and shows the need for stricter marketing restrictions across social media.

In addition to this, a story earlier in the month looked at the State of Victoria’s failure of regulations on alcohol deliveries, with alcohol harm groups saying that the current system makes it far too easy for children to buy alcohol online.

A survey by Alcohol Change Victoria of over 1,000 people found that over a quarter of 18-24-year-olds who used delivery services were not asked for ID or didn’t personally receive the order.

Not only is it often too easy for young people to buy alcohol without necessary checks, a study published this month shows that a quarter of Australians aged 16 and 17 are allowed to drink at home.

“In some cases, parents may be allowing their teenagers to drink at home in the belief that supervised alcohol consumption could facilitate a more responsible relationship with alcohol and reduce potential harm. However research suggests early alcohol use could lead to harmful drinking practices, both now and later in life.”

Whilst regulations are a few steps behind technology, the alcohol industry continues to develop products that seem to target young people. Mid-month, an alcoholic stout drink was banned from being advertised after a child accidentally drank it, mistaking it for chocolate milk. The stout brand was also ordered to change its branding, due to being so similar to the chocolate milk brand.

Another recent example of alcohol brands appearing to target younger drinks is the news that the energy drink Mountain Dew is releasing an alcoholic version. From the packaging it is difficult to tell that it is alcoholic.

Which studies came out? 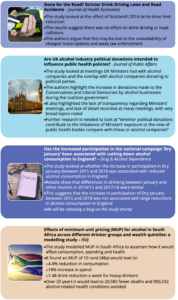