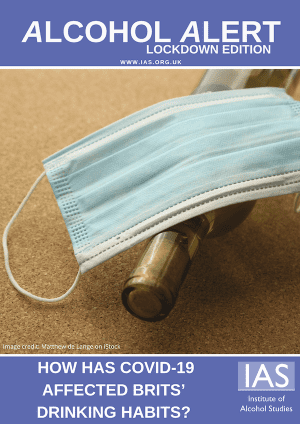 We hope you enjoy this edition.

Britain’s relationship with alcohol in lockdown 🎵

On the 23rd of March, the nation went into lockdown in response to an extraordinary event, a global pandemic of the COVID-19 virus.

The emergence of the deadly disease forced people to adapt rapidly to a drastically new environment, which has led many to explore how we cope.

In relation to alcohol, this has meant discovering the ways in which the lockdown has affected the nation’s drinking habits, as well as producers’ and retailers’ ability to cope with a decimated market: the pandemic forced pubs across the country to close their doors – some unwillingly (JD Wetherspoon) – and await the time when the government would declare them safe to reopen.

Now, as we near the reopening of pubs and other licensed premises, we took the pulse of an emerging evidence base on changes in UK alcohol consumption during the lockdown by bringing together findings from different sources.

The findings from our briefing, Alcohol consumption during the COVID-19 lockdown in the UK present a mixed picture, where the proportion of people drinking less during lockdown mostly reported to be similar to or slightly higher than the proportion drinking more during lockdown. Dr Sadie Boniface, who authored the briefing, told BBC radio that although there does not appear to have been a massive shift in the nation’s drinking habits, those who have upped their intake may be heavy drinkers already, and therefore at greater risk of harm.

Producers’ and retailers’ responses to the lockdown ranged from producing hand sanitiser as part of a national effort to combat the virus, with Brewdog being one prominent example – although their initial batch did not meet clinical standards (The Guardian, 02 Apr) – to those who tried to deny there was a problem, and so were reluctant to support their employees through straitened times. JD Wetherspoon boss Tim Martin told Sky News (20 Mar) that shutting pubs over the coronavirus outbreak was ‘over the top’ and that ‘there had hardly been any transmission of the virus’ in pubs. In his view. pubs were ‘much less crowded’ than supermarkets. When the lockdown forced him to close his establishments across the UK, he announced that employees would not be paid until the government stepped in to pay them on furlough, which sparked a public backlash (The Independent, 24 Mar).

Others adapted to the new environment, taking advantage of the new conditions for selling alcohol. The UK Government was quick to add off-licensed premises to its list of ‘essential’ retailers (BBC News Business, 25 Mar), and subsequent lobbying to gain greater freedoms in selling alcohol on premises has resulted in the Business and Planning Bill, which seeks to authorise new innovations such as outside seating and takeaway pints ‘in efforts to stop drinkers crowding indoors’ (Sunderland Echo, 26 Jun).

Alcohol industry players such as the BBPA and WSTA have clubbed together within the umbrella of the hospitality sector to push for changes to mitigate the negative impacts of the pandemic, which The Bureau of Investigative Journalism described as an ‘opportunity for [an] industry power grab’ (TBIJ, 24 Jun). Industry influence runs deep, as the following passage would attest:

… both of Diageo’s lobbying agencies are run by former Number 10 communications chiefs. The former boss of Scotch Whisky Association, of which Diageo is a member, is David Frost, Britain’s chief Brexit negotiator. The departing chief executive of the civil service, John Manzoni, is joining Diageo’s board later this year.

Indeed, support for UK producers and retailers stretches beyond national borders. Diageo, for example, is promoting a new global programme called ‘Raising the Bar’, a $100 million recovery fund for pubs and bars ‘to support pubs and bars to welcome customers back and recover following the COVID-19 pandemic’. The drinks giant invite applications from vendors based in cities across the world – including London – over the next two years.

However, such attempts to get the economy up and running could be seen as at odds with the messaging from public health experts to exercise caution easing out of lockdown, in order to prevent a further spike in COVID-19 cases. Furthermore, the prioritisation of alcohol consumption may hamper efforts to treat tackling alcohol harms as integral to the UK’s pandemic recovery plan. As Professor Sir Ian Gilmore, chair of Alcohol Health Alliance UK, wrote in the British Medical Journal (20 May):

This can be achieved through relatively low-cost prevention policies such as minimum unit pricing and marketing restrictions, plus those that can generate revenue, such as duty increases, alongside investment in alcohol treatment which presents savings in the long-run.

The introduction of Minimum Unit Pricing (MUP) in Scotland on 01 May 2018 was associated with a fall in the total volume of pure alcohol sold off-trade per adult in Scotland of 4–5% in the first 12 months, according to the latest Monitoring and Evaluating Scotland’s Alcohol Strategy (MESAS) report from Public Health Scotland (10 Jun).

The subsequent annual monitoring report of alcohol sales activity found that volumes stayed at their lowest levels in a quarter of a century (17 Jun).

Keep it on the low 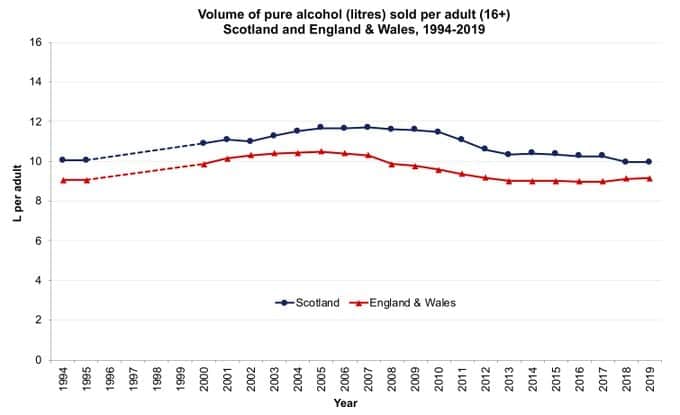 It’s all in the off-trade

The narrowing of sales volumes between both nations speaks to the influence of MUP on off-licence purchases, made all the more impressive by the fact that alcohol sold in the UK is now 75% more affordable than it was just over three decades ago, having risen in the alcohol affordability index for the eighth year running.

In the first 12 months of MUP, the largest relative net reductions in per-adult off-trade alcohol sales were observed for cider and perry. Smaller net reductions were seen for spirits and beer; however, these account for a greater share of the off-trade market and so made an important contribution to the fall in total off-trade sales in Scotland.

The reductions observed in these drink categories were partly offset by off-trade sales of wine, fortified wine and RTDs, beverages typically sold at prices above the 50p per unit threshold, and whose sales all increased in the post-MUP year. 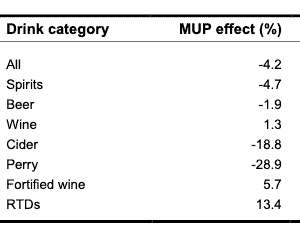 We conclude that MUP has been effective in reducing population consumption levels in Scotland in the one year period after it was implemented.

‘The impact of MUP on off-trade alcohol sales in Scotland is most likely explained by the policy’s effect on alcohol prices’, MESAS researchers wrote.

‘Attributing our findings to changes in price is further supported by the fact that the drink categories for which we estimated net reductions in off-trade sales in Scotland were also those that had the highest proportion of their sales at below 50ppu before MUP was introduced.

‘They were also the drink categories with largest increases in average sales price after MUP was implemented’ (perry, +54%; cider, +28; spirits and beer, both +11%).

‘We conclude that MUP has been effective in reducing population consumption levels in Scotland in the one year period after it was implemented.’

You can watch lead author Lucie Giles summarise the MUP evaluation findings in their video explainer:

Today we published the latest study in the #MUPevaluation, examining the impact of #MUP on alcohol consumption at a population level.

Alcohol behind a quarter of inequalities in mortality

A systematic review of studies containing more than 400,000 adults, 30,000 deaths from all causes and 3,000 events where alcohol is entirely attributable over a period of six years, has found that alcohol use explains up to 27% of the socioeconomic inequalities in mortality (The Lancet, 01 Jun).

They also explore some of the potential mechanisms underlying these inequalities, and find that the periodicity of drinking – rather than mean (average) consumption – could explain the difference in alcohol-related mortality between socioeconomic groups, which suggests that targeting heavy episodic drinking and binge drinking could be important to address the uneven impact of alcohol.

The review is one of several chapters focusing on alcohol-related issues in the June 2020 edition of The Lancet, led by an editorial titled ‘Failing to address the burden of alcohol’.

Labelled glasses make no impact on ‘ad libitum’ alcohol consumption (drinking at one’s pleasure) in a bar settings, according to a laboratory experiment from a couple of researchers, published in the Alcoholism: Clinical & Experimental Research journal (11 Jun). This is despite 85% of participants noticing the information. Qualitative analysis suggests that although participants perceived the glasses as useful for increasing awareness of the unit guidelines, they were seen as limited in their potential to change drinking behaviour ‘due to the unappealing design of the glass and a view that unit guidelines were not relevant to drinking patterns or contexts’.

A detailed analysis of the ‘fatal four’ road safety offences (which include drink-driving) since 2010 found that ‘where cutbacks have affected enforcement, there has been little or no improvement’ (Police Professional, 04 Jun). Published by the Parliamentary Advisory Council for Transport Safety (PACTS), the findings chime with the 2017 IAS report Running on empty, which discovered falling levels of road safety enforcement amidst a backdrop of no significant improvements in reducing drink drive fatalities and casualties on Britain’s roads.

A survey of 2,000 18-25-year-olds conducted by the National Organisation for Foetal Alcohol Syndrome-UK found a quarter were ‘unaware women should not drink alcohol during pregnancy’ (Daily Star, 04 Jun). Health and social care lecturer Jo Buckard, an expert in Foetal Alcohol Syndrome Disorder (FASD), said: ‘There’s been progress but no one should rest easy with these figures. If one-quarter of those in childbearing years hasn’t got the message yet, that could lead to a massive risk of FASD.’

A new CCG Outcomes Indicator Set from NHS Digital – the last quarterly publication in this series – shows that there has been a creeping upward trend in emergency admissions for alcohol-related liver disease in the five years up to 2018/19 (18 Jun). 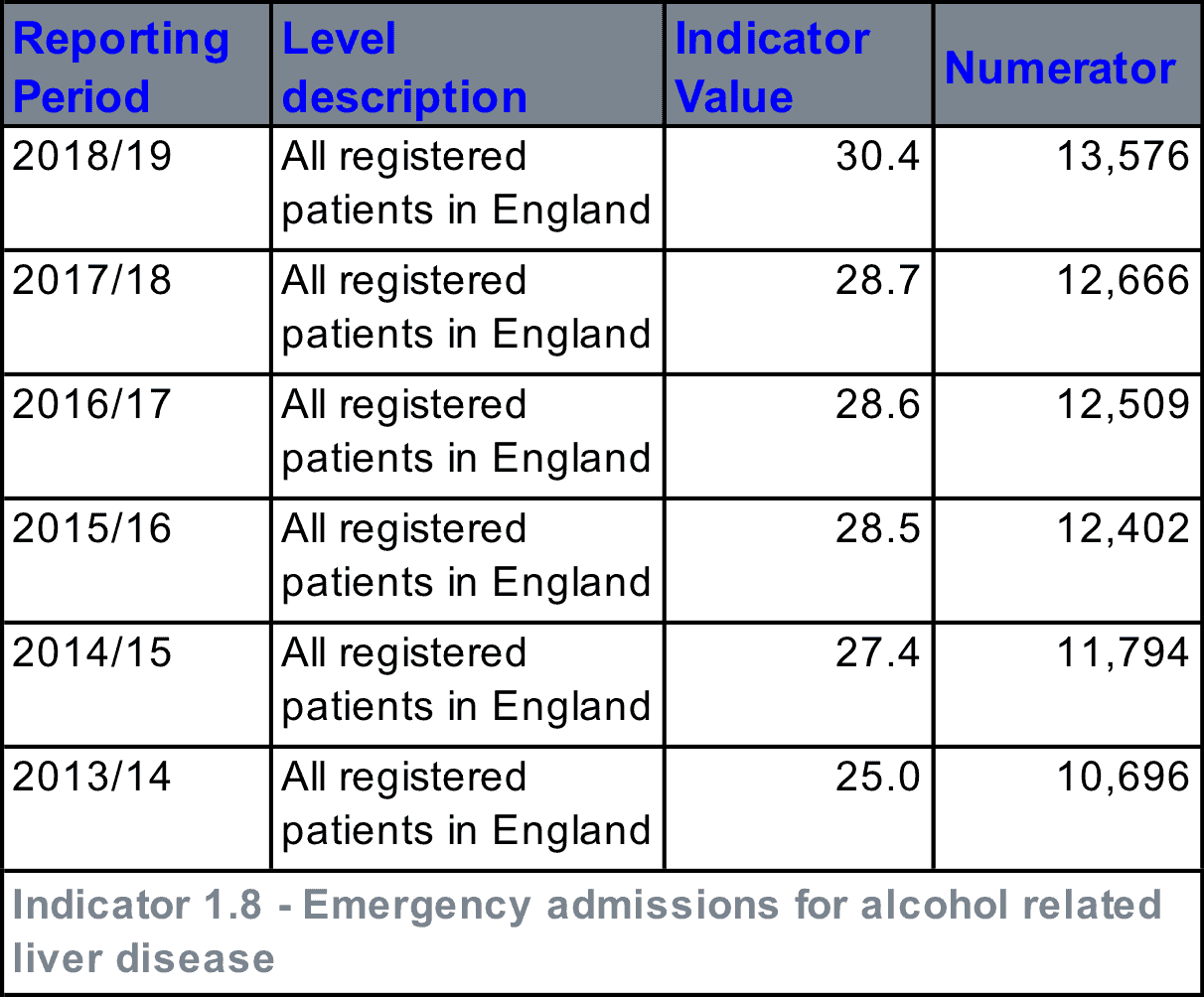 Future versions of this publication will be released on an annual basis, starting from October this year.