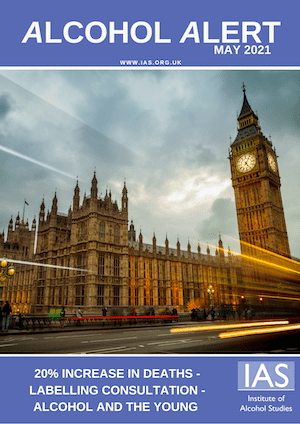 We hope you enjoy our roundup of stories below. Thank you.

In 2020, England and Wales saw the highest number of alcohol-specific deaths since the Office for National Statistics (ONS) began comparing data in 2001.

The ONS report, released earlier this month, shows 7,423 deaths were wholly attributable to alcohol last year. This is a 20% increase from 2019 and the highest annual total ever recorded by the ONS. The following graph clearly shows this increase since 2001. 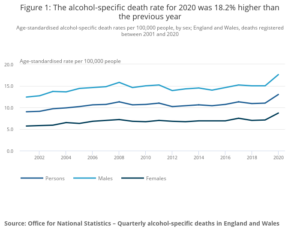 Professor Sir Ian Gilmore, Chair of the Alcohol Health Alliance, told us that

“These are the first statistics to really stop me in my tracks in 20 or 30 years; it’s startling and shocking. These data are a warning that the Government would ignore at their peril.”

Although the report caveats that it will be some time before we understand the reasons behind these numbers, it does link to Public Health England data that show drinking patterns have changed since the beginning of the coronavirus pandemic.

Colin Angus, research fellow at the Sheffield Alcohol Research Group, recently published a blog on the IAS website in which he mentions these changing patterns. He states that there has been a shift “away from beer and towards wine and particularly spirits” and that it is likely alcohol sales in supermarkets increased significantly. Although it will be a while before we see the health impacts of these changing patterns, concerns have been raised by health groups about the long-term health impacts of increased heavy drinking during lockdown. 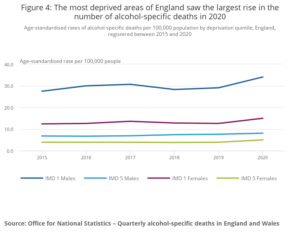 Dr Sadie Boniface, Head of Research at the Institute of Alcohol Studies, said

“We need to better understand the cause of these deaths by looking at the electronic health records of those who have died. We also need to involve people with lived experience, to understand the what the experience has been of getting appointments and accessing treatment services during the Covid-19 pandemic.”

The study is very timely, as it follows a recent piece of research that found that 80% of 11-19 year olds recalled seeing at least one alcohol advert in the past month. Other studies have demonstrated a clear link between under-age people seeing alcohol adverts and increasing their drinking.

A report of 277,000 adolescents has shown more restrictive marketing policies were associated with a lower chance of lifetime drinking among adolescents.

The research by Boniface et al builds upon this previous research and assesses the relationship between reactions to alcohol adverts and susceptibility to alcohol among adolescents.

The study used three alcohol adverts that were not in breach of any marketing codes: a Fosters, Smirnoff and Haig Club advert. It was found that 53% of the 2,582 participants had a positive reaction to the Fosters advert, 52% to Smirnoff, and 34% to Haig Club.

Other interesting findings were:

The authors of the study highlight their concern about the UK’s complaints-led self-regulation of alcohol marketing, as marketing should not particularly appeal to adolescents. They suggest considering tighter restrictions or bans on certain types of media and marketing, such as product placement and alibi marketing.

If not bans, then tighter controls on messaging in alcohol adverts could help limit exposure and appeal; an approach comparable to the loi Évin regulations in France.

A study by University College London (UCL) between 2011 and 2016 looked at the social media presence of 6,700 young people aged 10-19 and compared the findings with how often they drank alcohol.

Alcohol consumption among young people has decreased globally in recent years. There is still poor understanding as to why it has decreased. Factors such as better legal enforcement, lower affordability, and the rise of new technologies, almost certainly play a part (see 2016 IAS report). With this rise in new technologies and the widespread use of social media platforms, the public sphere and social space amongst young people has somewhat changed. Fewer young people are engaging in activities that are intrinsically linked to alcohol consumption, such as going to nightclubs.

The study found that 18% of 10-15 year olds drank ‘at least monthly’ and that this group used social media more, had more friends and were generally older. Similarly, among young people aged 16-19, those who used social media for less than an hour were less likely to be drinking each month. This age group was also more likely to binge drink three or more times a month if spending more time on social media. Binge drinking was categorised as drinking five or more drinks in one sitting.

The researchers concluded that the study was consistent with other studies that show greater use of technology is linked to heavier drinking. Having said that, they do not rule out that the relationship could work the other way: that heavier drinking leads to more frequent use of social media.

“The reasons why time spent online could link to drinking behaviours are not clear but could include having negative experiences in online spaces, as well as exposure to advertising.”

They also highlighted that social media may be part of a cultural norm of drinking, for instance posting photos of people drinking. Further, those who use social media may be more sociable already and therefore more likely to be in situations where alcohol is consumed more.

After details of an upcoming Government consultation on alcohol labelling were leaked to the media, Dan Carden MP held an adjournment debate on the topic.

The proposed consultation was condemned by many representatives of the alcohol industry and in some media outlets. Emma McClarkin, Chief Executive of the British Beer & Pub Association described the proposal as “ludicrous” at a time when pubs are trying to recover from the Covid-19 pandemic. Following suit, Adam Kilcoyne, deputy director of the neoliberal lobbying group the Adam Smith Institute, said “Ministers thinking up this madness should stop and drop the policy.”

The Government responded to these comments by saying that “no decisions have yet been taken”.

As Dan Carden pointed out in his debate, recent polling on the subject has found that the public are in favour of such labelling, with 74% of people wanting ingredients on labels and 62% wanting nutritional information, such as calories.

“people have the right to accurate information and clear advice about alcohol and the health risks that may be associated with it, to enable them to make informed choices about their drinking and what they consume.”

To show its support for considering alcohol labelling policy, the Alcohol Health Alliance UK sent a letter to Health Secretary Matt Hancock echoing Mr Carden’s sentiment: that the public is generally unaware of the calorie content in alcohol, that the public support the inclusion of such information, and that more information should also be included – such as the UK Chief Medical Officers’ low risk drinking guidelines. The letter has 93 signatories, including 13 Members of Parliament and 10 members of the House of Lords.

So what next? The consultation will be launched “very shortly” with Jo Churchill stating that it is important that steps are taken in a measured way to create benefit for the most people.

Following the Commission’s September 2020 report ‘It’s Everywhere’ Alcohol’s Public Face and Private Harm, a debate was held in the House of Lords on 22 April 2021 to discuss the findings.

The report highlighted the harm that alcohol causes in the UK, including that:

Baroness Finlay of Llandaff, the Commission’s chair, introduced the debate by highlighting the report’s findings and recommendations, including: calling for an alcohol strategy with evidence-based policies, minimum unit pricing (MUP) in England, a review on licensing, and more informative labelling.

Many of the present Lords supported the report’s points. Baroness Randerson referenced the success that Scotland has had with MUP and that this should be considered in England too. Lord Brooke of Alverthorpe asked whether emerging technologies could be used to help people better understand product calories – and how alcohol labelling should be included with this. Lord Bishop of Carlisle highlighted the link between domestic violence and alcohol and that the Government must rethink its strategy.

Baroness Fox of Buckley was less supportive of the report. She stated that she is concerned with the direction of the report, as she believes it exaggerates health harms and links alcohol and drinking with “reprehensible behaviours such as domestic abuse, family neglect, crime and child suicide”. Fox went on to say that MUP is illiberal and treats everyone as a potential problem drinker.

In response to the discussion, Lord Bethell of Romford, Parliamentary Under Secretary of State at the Department of Health and Social Care:

The World Health Organization (WHO) European office has published a report on how countries have implemented their SAFER policy recommendations, showing that Eastern Europe and Central Asia have done better in reducing alcohol consumption compared to Western Europe.

The study finds that:

Dr Carina Ferreira-Borges, who has been leading the research, praised the actions of Member States that have followed WHO’s recommendations and implemented alcohol policies. She highlighted Eastern Europe and central Asia’s decreases in alcohol consumption, saying that

“These countries currently lead by example in implementing alcohol policies, but they need to maintain and increase their efforts, and other countries of the Region need to follow their lead.”

The graph below shows the change in implementation of the five SAFER areas between 2016 and 2019 in the European Region, with the numbers representing the percentage of countries deemed to have implemented the areas sufficiently. It highlights the lack of progress made in Europe and that only drink-driving measures were successfully implemented. However this was already being done before the report and saw no improvement.

The report represents a milestone in assessing alcohol control policies across the region. Moving forward it will provide a barometer with which to assess how these policies are being implemented and the effectiveness of them. 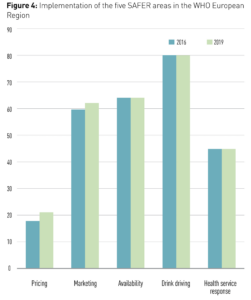 IAS Analysis: What does the March budget mean for alcohol duties?

Alcohol duties were once again frozen this year, the eighth year out of the last nine that the Government has done so.

In this briefing, IAS assesses the impact that the freeze will continue to have on healthcare and the UK’s finances, and what the Government needs to consider.

What this means for healthcare?

What this means financially?

What should the Government do?

The Republic of Ireland is pushing ahead with plans to implement minimum unit pricing (MUP) on alcohol by January 2022, despite Northern Ireland not committing.

Ireland had been delaying implementation in order for Northern Ireland to implement it at the same time. This was to avoid cross-border trips to purchase cheaper alcohol.

The Republic’s Frank Feighan, Minister of State at the Department of Health, stated that Northern Ireland is now “not bringing it in before the northern elections in May 2022”. Although he conceded that there could be issues with cross-border trips, he believes that the positives “far outweigh the negatives”, highlighting the effectiveness of the policy in Scotland in reducing deaths – despite bordering England which does not have MUP.

With Scotland, Wales and now Ireland bringing in MUP, pressure is mounting for England to do the same.