Drink-driving deaths in the UK have flatlined since 2010, yet England and Wales still have one of the highest legal limits in the world.

Things must change – it's time the government took action.

A coalition of road safety charities, emergency services and health groups have made fresh calls for MPs to reduce the drink-driving limit in England and Wales.

We at the Institute of Alcohol Studies have produced a two-minute animation to support this campaign, which outlines the key arguments (script available here):

The call comes after statistics show no progress has been made on drink-driving since 2010, with 240 deaths and more than 8,000 casualties reported each year.

England and Wales have one of the highest drink drive limits in the world. Set at 80mg alcohol per 100ml blood, it is greater than the rest of Europe and Commonwealth countries such as Australia, New Zealand and South Africa.

In the UK, Scotland lowered its limit to 50mg in December 2014, and police figures showed a 12.5% decrease in drink drive offences in the first nine months.

Do you know what drink-driving is like in your area?

Drink driving costs £800million each year and the majority (60%) of those killed or injured are people other than the driver. Research shows that lowering the legal limit in England and Wales to 50mg – matching the rest of the UK – would save a minimum of 25 lives each year.

Organisations that support a lower limit include the RAC Foundation, BRAKE, the Police Federation, Fire Brigade Union, Royal College of Emergency Medicine and the AA (see foot of page). The latest British Social Attitudes Survey showed more than three-quarters (77%) of the public are in favour of the move.

Click here to view our two-page briefing, 'Lowering the drink-driving limit in England and Wales'. 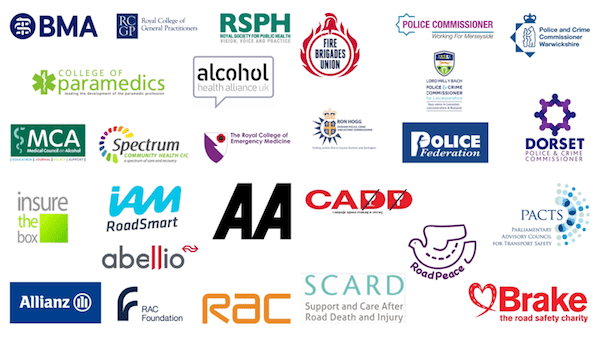