National datasets on alcohol deaths show contrasting fortunes between Scotland and the other UK nations.

The Office for National Statistics (ONS) published ‘Alcohol-specific deaths in the UK: registered in 2019‘, which found that there were 7,565 deaths (11.8 per 100,000 population) registered in the UK that related to alcohol-specific causes in 2019. This is the second highest number of deaths since the data time series began in 2001.

Trend data also indicates that as the mortality rate has crept upwards in that period of time, so the phenomenon of middle-age / older drinkers has become more prevalent: trend data show significant increases since 2001 in the rate of alcohol-specific deaths in people aged 55 to 79 years. 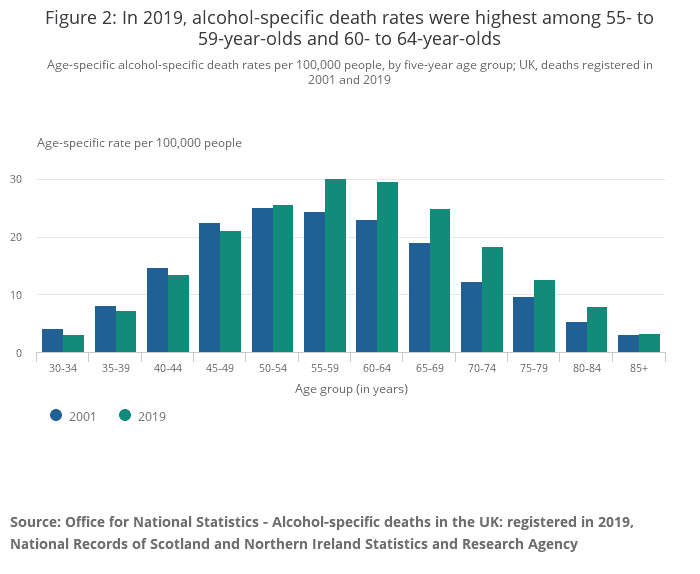 The report noted that: ‘Given that the definition of alcohol-specific deaths includes mostly chronic conditions, such as alcoholic liver disease, the increased rates in the older age groups may be a consequence of misuse of alcohol that began years, or even decades, earlier’.

Between the UK nations, Northern Ireland became the constituent country with the highest alcohol-specific death rate in 2019 (18.8 deaths per 100,000), partly because of its worsening rates (2019 saw the mortality rate reach a record high of 18.8 per 100,000 people) and partly because of Scotland drastically lowering its rate over the same period – Scotland remains the only one of the Home Nations to show statistically significant improvement in alcohol-specific death rates since records began in 2001.

For a summary of our findings, please follow the thread below:

Alcohol-specific deaths in the UK: registered in 2019 from @ONS out today https://t.co/zeV3s28L0K

The ONS also released a provisional dataset showing the impact of COVID-19 on alcohol deaths in England and Wales during the lockdown. They found that there were 5,460 deaths related to alcohol-specific causes registered in the first three quarters of 2020 (Jan to Sept), a 16.4% increase compared with the same nine-month period in 2019, and at one point the death rate reached its highest peak since the data time series began in 2001, of 12.8 deaths per 100,000 people.

Commenting on the findings, Ben Humberstone, deputy director of Health Analysis and Life Events at the ONS said: ‘Today’s data shows that in the first three quarters of 2020, alcohol-specific deaths in England and Wales reached the highest level since the beginning of our data series, with April to September, during and after the first lockdown, seeing higher rates compared to the same period in previous years.

‘The reasons for this are complex and it will take time before the impact the pandemic has had on alcohol-specific deaths is fully understood.’