Statistics released by the Department for Transport today show an increase in casualties and incidents caused by drink-driving, while there has been no improvement in drink-driving related deaths since 2010.

Campaigners, including the Campaign Against Drink Driving (CADD) and the Alcohol Health Alliance, are calling on the Government to lower the drink drive limit in England and Wales in order to save lives and prevent serious injuries.

In December, Transport Secretary Chris Grayling was criticised by his own MPs for taking too relaxed an attitude to drink-driving. These new figures will put further pressure on the Department of Transport, who are against lowering the drink-driving limit.

The statistics, published in a statistical release from the Department for Transport show that across the UK in 2015:

While these figures are provisional and may be revised, they indicate a worrying trend. Previous figures show that only around 40% of people killed or seriously injured by drink-driving are drivers over the limit. Around 60% are other passengers, road users or pedestrians.

England and Wales currently have a high drink-driving limit by international standards, set at 80mg alcohol/100ml blood. In December 2014, Scotland used its devolved powers to lower its limit to 50mg, and saw a 12.5% decrease in drink drive offences in the first nine months of the new limit.[1] The Northern Ireland Assembly is also in the process of lowering its drink driving limit too.

Despite this lack of progress the Department of Transport have refused to consider lowering the drink-driving limit, a move supported by 77% of the public and a wide range of high profile groups, including the Police Federation, the College of Paramedics, the Fire Brigades Union, road safety charities, insurance firms and health bodies (see notes to editors for the full list of stakeholder supporters).

In June 2016, a Private Member’s Bill to lower the limit in England and Wales to 50mg, sponsored by Lord Brooke of Alverthorpe, successfully passed through all stages in the House of Lords, but ran out of parliamentary time to progress further. There are high levels of public support for this move, with a recent opinion poll citing 77% support for a lower legal limit.[2]

It is worrying to see this increase in drink-driving incidents and casualties, along with the fact that there has still been no progress in reducing drink-driving deaths since 2010.

The government have taken their eye off the ball, and need to listen to the overwhelming evidence that a lower drink-driving limit would save lives and improve road safety. There is huge professional and public support for this.

The 80mg limit in England and Wales is high by international standards. Within Europe, only Malta has as high a limit, with all other countries opting for 50mg or lower. Other international comparisons include:

Groups supporting a lower drink driving limit are illustrated below: 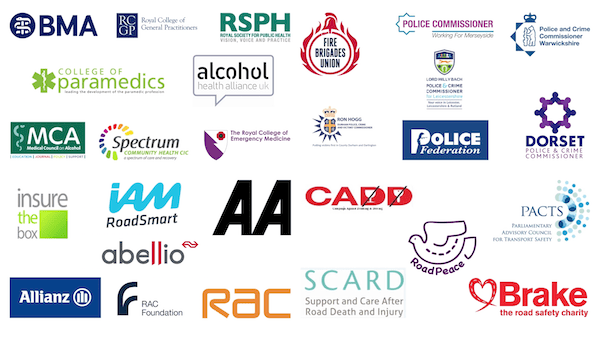