A newly published report from Public Health England has revealed that middle-aged drinkers are the most common users of alcohol treatment services, with a significant proportion of patients in their 40s. Between April 2014 and March 2015, half of all clients in treatment for substance misuse (51%) presented for alcohol problems (see below). Of these, 89,107 were treated for problematic drinking alone, and 61,533 for alcohol alongside other substances.

Individuals in treatment only presenting with problematic alcohol use (alcohol-only) had an older age profile than opiate users (68% aged 40 and over; 11% 60 years and over) (below), and of those in treatment who died (792 deaths), the majority were aged 40 and over (median age 49). 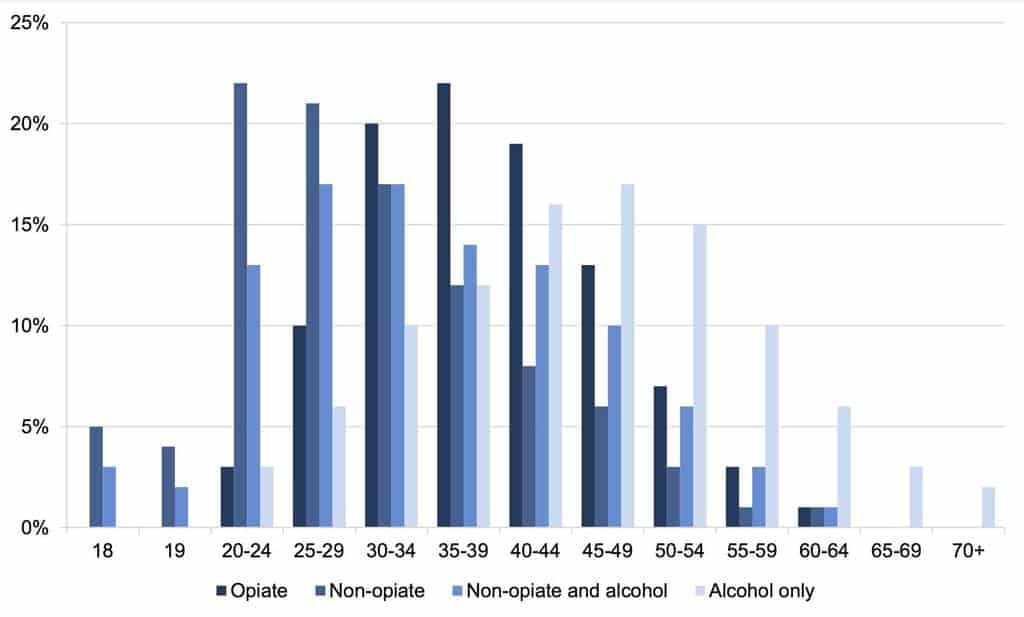 The fortunes of older clients contrast sharply with that of younger ones. The number of citations for alcohol treatment increased for every age cohort over 45 years, compared with a 34% fall (9,574 to 6,290) for 16-24 year-olds between 2009-10 and 2014-15. This reflects the general reduction in the total number of younger individuals presenting for treatment over the six-year period. The report attributes this fall to a general downward trend in young people’s drinking, as reported in the ‘Smoking, Drinking and Drug Use Among Young People in England’ survey for 2014, which reported that 38% of 11-15 year-olds had tried alcohol at least once, the lowest proportion since the survey began.

According to the report, the number of individuals in treatment for alcohol has remained relatively stable over the last six years, with the proportion of alcohol-only clients increasing slightly by 2% since 2009-10 (below).

Alcohol is also a factor in 63% of all new treatment presentations among the four main substance groups (the other three being cannabis, cocaine, and benzodiazepine).

‘Adult substance misuse statistics from the National Drug Treatment Monitoring System (NDTMS)‘ marks a break from previous substance misuse datasets in eliminating double counting from its reporting practices. Thanks to a series of consultations between 2012 and 2014, the National Treatment Agency (NTA) found a strong consensus among respondents that drug and alcohol treatment journeys should be combined. This is because on previous occasions, when an individual recorded with a primary alcohol treatment episode concurrent with, or followed by, a primary drug treatment episode, this was reported as two separate treatment journeys.

“Some 6,000 individuals nationally had been double counted in this way”, the report states. The new approach – to combine treatment journeys – removes this anomaly. Therefore, the report warns, “due to these changes it is not possible to compare the statistics in this report to previous adult drug and alcohol NDTMS statistical publications”.

There has been a marked improvement in the number / proportion of patients successfully exiting alcohol treatment services in the last six years. In 2014-15, 130,609 people exited the drug and alcohol treatment system, 52% (67,788) having successfully completed their treatment free of dependence. Alcohol-only clients recorded above-average rates of success, with almost two-thirds of clients (61%) completing treatment. This is up on 49% in 2009-10 (below).