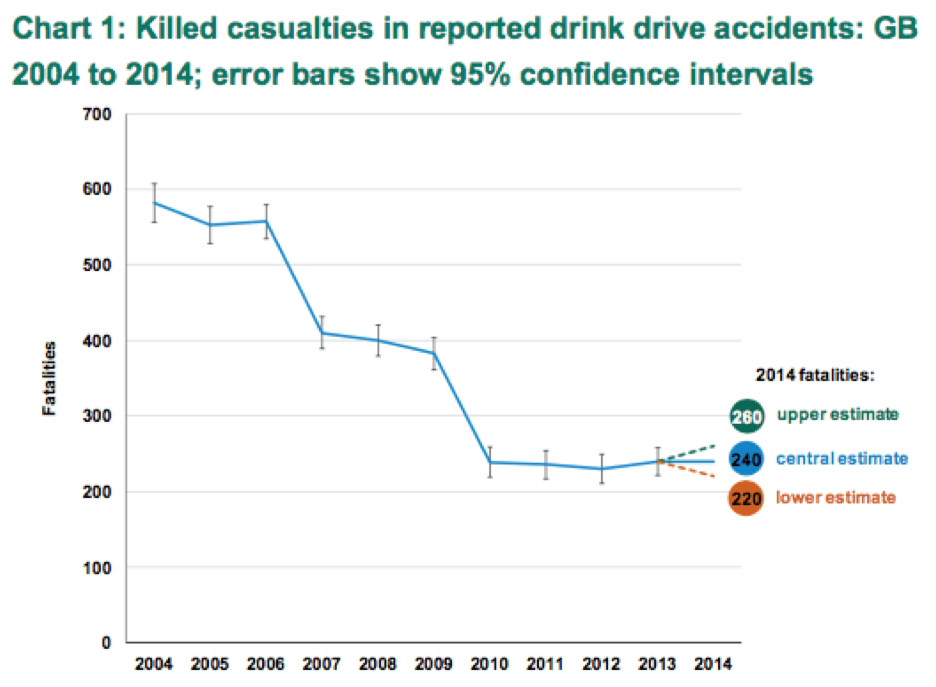 Statistics released by the Department for Transport today show that there has been no improvement in drink-driving related deaths since 2010.

Campaigners, including the Campaign Against Drink Driving (CADD) and the Alcohol Health Alliance, are calling on the Government to lower the drink drive limit in England and Wales in order to save lives and prevent serious injuries.

The statistics, published in a statistical release from the Department for Transport show that across the UK in 2014:

England and Wales currently have a high drink-driving limit by international standards, set at 80mg alcohol/100ml blood. In December 2014, Scotland used its devolved powers to lower its limit to 50mg, and saw a 12.5% decrease in drink drive offences in the first nine months of the new limit.[1] The Northern Ireland Assembly is also in the process of lowering its drink-driving limit too.

In June 2016, a Private Member’s Bill to lower the limit in England and Wales to 50mg, sponsored by Lord Brooke of Alverthorpe, successfully passed through all stages in the House of Lords, but ran out of parliamentary time to progress further. There are high levels of public support for this move, with a recent opinion poll citing 77% support for a lower legal limit.[2]

There is also strong support from a wide range of high profile groups, including the police and emergency services, road safety charities, insurance firms and health bodies (see notes to editors for the full list of stakeholder supporters).

Drink-driving has huge and life changing impacts, both for the individuals involved and their friends and families. The number of drink-driving deaths on our roads has not reduced since 2010, the government needs to tackle this issue head on and lower the drink-driving limit to make our roads safer.

It is deeply disappointing to see that deaths from drink-driving have not gone down since 2010. The government have committed to improving road safety, and it is now time they looked at the evidence from home and abroad and lowered our legal limit.

Not only would lowering the drink-driving limit save lives and prevent life changing injuries, but it is consistently supported by the general public. Now is not the time for complacency, the government must take action to make our roads safer.

The 80mg limit in England and Wales is high by international standards. Within Europe, only Malta has as high a limit, with all other countries opting for 50mg or lower. Other international comparisons include: