The UK consumes more alcohol than the average OECD member country, and has done so for 20 years, according to a study published by the Organisation for Economic Co-operation and Development (OECD).

The Tackling Harmful Alcohol Use: Economics and Public Health Policy report examines the health and economic impact of policies, such as tax, regulation, education and health care, on dangerous drinking in OECD nations.

Its analysis of trends in alcohol consumption of OECD countries found that while average annual consumption is the equivalent of 9.5 litres of pure alcohol per capita (down by 2.5%, on average, during the past 20 years), UK alcohol consumption increased over the same period of time, reaching an estimated average of 10.6 litres annually in 2011. This raises questions for how best the country can tackle the inevitable health and social impacts of widespread harmful and hazardous drinking. 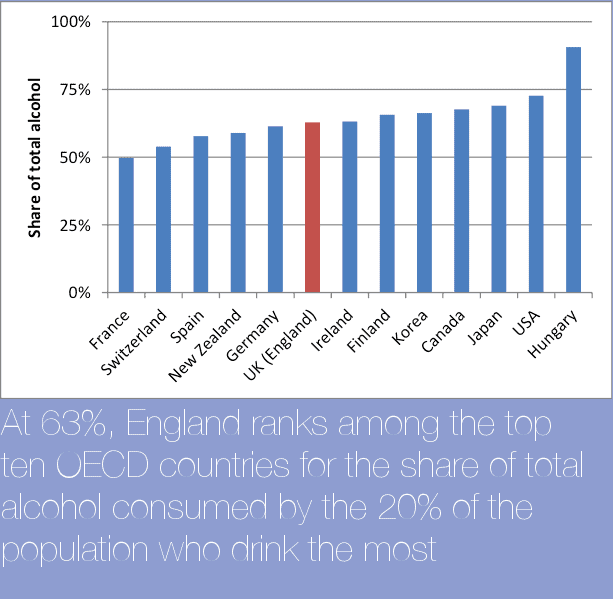 1. Levels of alcohol consumption in the United Kingdom are above the OECD average and increased during the last 30 years. In 2011, an average of 10.6 litres of pure alcohol per capita was consumed in the United Kingdom, compared with an estimate of 9.5 litres in the OECD.

2. Initiation into alcohol drinking happens at increasingly early ages. In the United Kingdom, the proportion of 15 year olds who have experienced alcohol increased from 71% in 2002 to 75% in 2010.

3. The distribution of alcohol drinking is heavily concentrated. In England, the heaviest-drinking 20% of the population drink almost 63% of all alcohol.

5. Compared with other countries in the OECD area, the United Kingdom has relatively high levels of taxation for all types of alcoholic beverages. The blood alcohol concentration (BAC) limit for drivers is 0.08%, the highest in OECD countries, although Scotland lowered the limit to 0.05% in 2014 (the majority of OECD countries enforce a BAC limit of 0.05%). The United Kingdom has adopted a wide-range of policies to regulate on- and off-premise sales of alcoholic beverages and promotion of alcohol products, but other legally binding regulations (e.g. on sponsorships, sales promotions and health warnings on alcohol containers) are not applied at the national level.

The results for England tally with several of the key findings of the report:

• Average annual consumption in OECD countries is the equivalent of 9.1 litres of pure alcohol per capita (down by 2.5%, on average, during the past 20 years).

• The majority of alcohol is drunk by the heaviest-drinking 20% of the population in the countries examined.

• Rates of hazardous drinking (a weekly amount of pure alcohol of 140 grams or more for women, and 210 grams or more for men) and heavy episodic drinking (“binge drinking”, defined as five to eight drinks in one session depending on the country) in young people, especially women, have increased in many OECD countries.

• People who are better educated and of higher socioeconomic status (SES) are more likely to drink alcohol than others.

• Less educated and lower SES men, as well as more educated and higher SES women, are more likely to indulge in risky drinking. The drinking behaviours of young, better educated, and higher socioeconomic status women are converging to those of men.

The paper concludes that governments seeking to tackle binge drinking and other types of alcohol abuse can use a range of policies that have proven to be effective, including counselling heavy drinkers, raising prices, increasing the regulation of the marketing of alcoholic drinks and stepping up enforcement of drinking and driving laws.

“The cost to society and the economy of excessive alcohol consumption around the world is massive, especially in OECD countries,” said OECD Secretary-General Angel Gurría, launching the report in Paris. ”This report provides clear evidence that even expensive alcohol prevention policies are cost-effective in the long run and underlines the need for urgent action by governments.”

Watch video Alcohol: tackling heavy cost of harmful drinking for a summary of the report’s findings.