Parliamentary report lays bare the impact of alcohol on our emergency servicesonepiecejigsaw2020-07-16T10:11:19+01:00

On 6 December, the All Party Parliamentary Group on Alcohol Harm launched a new report into the burden alcohol places on the emergency services. The Frontline Battle took evidence from police officers, fire crew and paramedics, and also collected written evidence, including extensive surveys of emergency service staff across England (picturedleft). Findings include:

A launch event for the report was held in Parliament and was attended by MPs and Peers who were able to talk to emergency service workers about their experience of alcohol-related incidents. The group of Parliamentarians were told that alcohol puts a significant and damaging strain on our emergency services, and that many of these incidents were avoidable if the right action was taken. 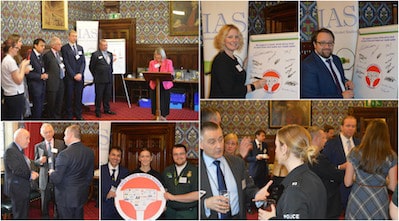 The report recommendations include:

“This shocking report reveals the impact and extent of excessive drinking on the selfless men and women who provide our emergency services. They simply should not have to tolerate being assaulted on a daily basis, and we in Government and Parliament should not tolerate it for them.

“It should be wholly unacceptable to hear of an A&E consultant being kicked in the face, medical staff having TV’s thrown at them, or female police officers being sexually assaulted. And it’s not just emergency staff who suffer; as this report describes many other people are impacted too, from taxpayers who foot the bill, to patients who can’t be seen promptly, or worse, those innocent people killed in avoidable drunk driving accidents.

“Urgent action, as described in this report, is needed from Government at the highest level in order to address this.”

“Alcohol-related incidents have a genuinely negative impact on emergency service staff, adding to the rising demands and pressures faced by Ambulance services and Emergency Departments up and down the country.

“Many of these problems are avoidable, and the Government needs to do more to relieve the alcohol-related burden on ambulance and paramedic crews, as well as other emergency staff. In particular we’d like to see a lower drink driving limit, and action to stop alcohol being sold at pocket money prices, particularly strong white cider.”

Many also posed for a photoshoot pledging their support for a lower drink driving limit (pictured above left). IAS submitted evidence from their report into alcohol and the emergency services, and the organisation’s video ‘Alcohol’s impact on the emergency services‘ was played at the event.

Alcohol’s impact on emergency services from The Institute of Alcohol Studies on Vimeo.