The downward trend in the amount of alcohol sold per adult in Scotland has reversed, according to figures released by NHS Health Scotland today. The trend is mainly due to more alcohol being sold through supermarkets and off-licences compared with recent years, particularly beer and wine. 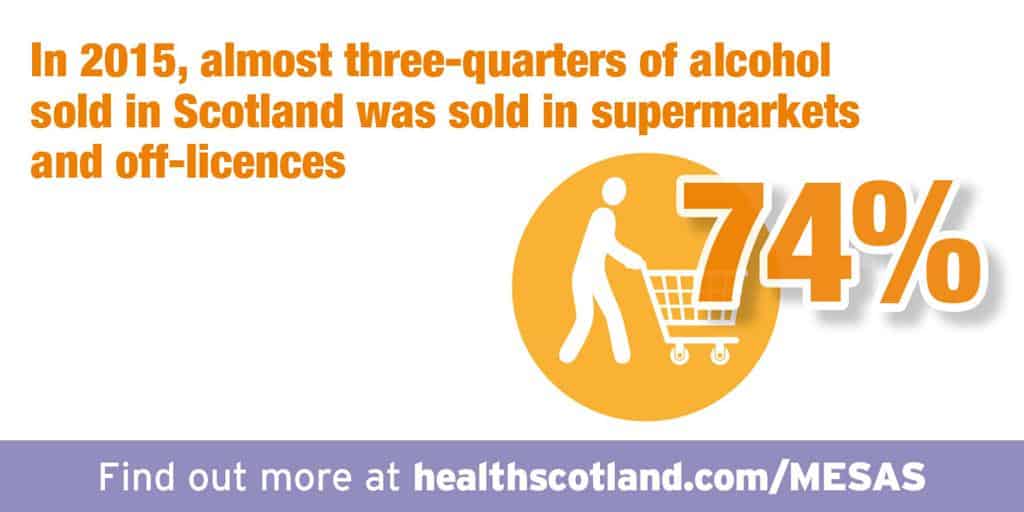 Analysis of the most recent consumption data suggests that 10.8L of pure alcohol was sold per adult in Scotland in 2015, equivalent to 41 bottles of vodka, 116 bottles of wine or 477 pints of beer for every adult in Scotland. Almost three quarters of alcohol – 74% – was sold through off-sales (illustrated), which is the highest market share since recording began in 1994. 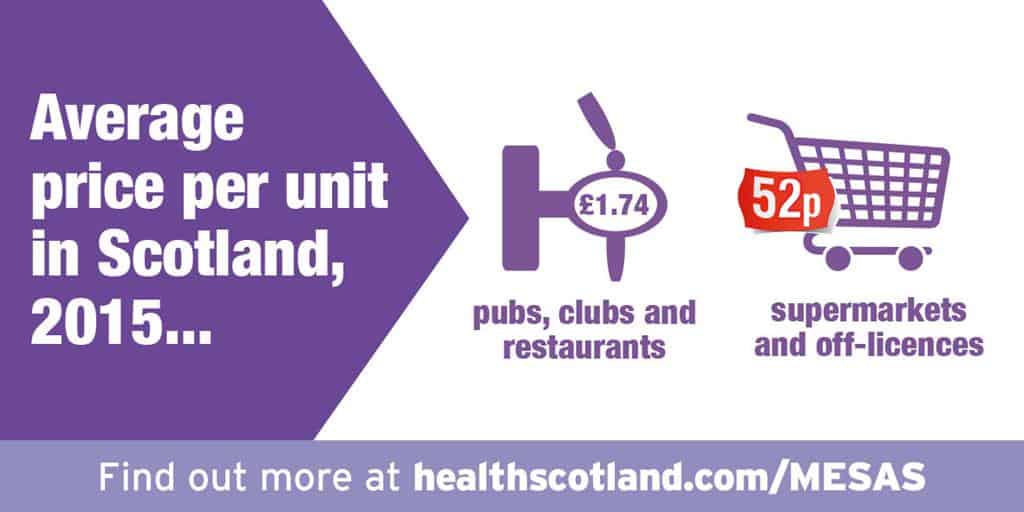 As well as alcohol sales, the researchers examined alcohol prices. In 2015, it was found that the average price of a unit of alcohol sold through off-sales was 52 pence (compared with £1.74 sold through on-sales, illustrated), which has not changed in the past two years. A large amount of alcohol continues to be sold cheaply relative to its strength. More than half of off-sales alcohol was sold at below 50 pence per unit, the initial level proposed for minimum unit pricing. The amount of beer sold below this price has increased by 11% in the past two years, equivalent to over 30 million bottles.

‘It is concerning that the recent falls in population alcohol consumption have reversed and that off-trade alcohol sales have reached their highest level. Trends in the price of alcohol sold by supermarkets and off-licences correspond with trends in the volume of alcohol sold by these retailers. Between 2009 and 2013, the average price of alcohol increased and consumption decreased. Since 2013, average price has flattened and consumption has increased. Higher levels of alcohol consumption result in higher levels of alcohol-related harm and these present a substantial public health and economic cost to Scotland. Policies that reduce the availability of low priced, high-strength alcohol are the most effective for reducing alcohol-related harms and narrowing health inequalities.’

The figures also give fresh justification to public health campaigners’ calls for introducing minimum unit pricing, a measure lawfully passed by the Scottish Government four years ago, but yet to be implemented because of a court challenge over its legality, led by the Scotch Whisky Association.

Scotland is now a nation of home drinkers, with more alcohol sold through supermarkets and off-licences than ever before. This has been driven by really low prices and constant promotions encouraging us to consume more.

More than half of alcohol in supermarkets and off-licences is sold at less than 50p per unit, while a fifth costs less than 40p per unit. The very cheapest products under 30p per unit are mainly vodkas and strong ciders which are favoured by young, vulnerable and harmful drinkers.

The more affordable alcohol is, the more we drink, and this means more alcohol-related hospital admissions, crime and deaths. Politicians across the Scottish Parliament understood this evidence when they passed minimum unit pricing legislation four years ago. It is really disappointing that this life-saving measure has been delayed by the Scotch Whisky Association’s legal challenge. Their defence of cheap vodka and cider is somewhat at odds with the ‘iconic’ image of Scotch. Like the tobacco industry, the alcohol industry is placing profits before people’s health.

With 22 Scots dying because of alcohol every single week and sales increasing, minimum pricing is desperately needed.