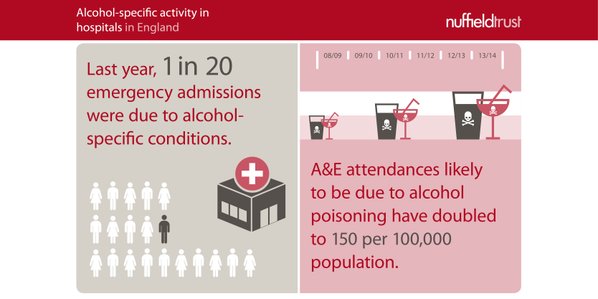 The growing burden of alcohol-related activity on hospitals in England has been revealed in a new study, as the NHS faces a ‘stark challenge’ in trying to deal with the consequences of harmful drinking.

The Nuffield Trust report ‘Alcohol-specific activity in hospitals in England’ finds that emergency admissions to hospital specific to alcohol have increased by over 50% in nine years and now top a quarter of a million a year (255,567), while the rate of people attending A&E with probable alcohol poisoning has doubled in six years.

The authors of the report set out to assess the extent of alcohol-specific activity in hospitals in England, whether it had increased over time, and whether these trends were different across demographic, socio-economic and regional patterns. Their findings show that:

The researchers looked at only measures of hospital activity specific to alcohol, thereby excluding conditions where alcohol was a contributing factor, such falls, domestic violence or heart disease. The figures in their report are therefore an underestimate the true levels of alcohol-related activity.

The measures included attendances at A&E likely to be due to alcohol poisoning, which tends to result from binge-drinking; and admission to hospital for alcohol-specific conditions, which are generally due to chronic or excessive alcohol consumption. The report also takes an in-depth look at patterns of hospital use in people with the specific condition alcohol-related liver disease (ARLD), which arises from prolonged heavy drinking over long periods, to assess whether there were opportunities over time to tackle patients’ harmful drinking. The researchers used Hospital Episode Statistics (HES) data from April 2003 to March 2014, covering all patients aged 15 years and over.

The report conclusion calls for much better recording of alcohol-related activity in hospitals, particularly the measure which counts attendances at A&E due to alcohol poisoning. They also expressed concern that as a large proportion of hospital alcohol services are funded through local authority public health budgets, recent announcements by the Government of cuts to these budgets raise questions about the sustainability of funding for local alcohol services. NICE recommends commissioning hospital alcohol workers to assess and manage people who drink alcohol at harmful levels – but a survey in 2013 by Public Health England (PHE) suggests that one in four hospitals considered a suitable size to merit a team do not have any form of alcohol service.

Claire Currie, one of the report’s authors, wrote: “With the Christmas party season in full swing, it’s worth considering the full burden over-indulgence in alcohol is placing on our NHS, as well as the obvious human cost. Our research has uncovered a picture of rising and avoidable activity in hospitals, representing a stark challenge for the Health Service at a time when it’s already great pressure. Hospitals alone cannot tackle this issue – the Government must consider measures such as minimum unit pricing, restricting availability and limiting marketing and advertising”.

Fellow author Dr Alisha Davies, Senior Research Analyst at the Nuffield Trust, added: “With one in four hospitals already without some form of alcohol team, we’re worried that cuts to NHS and local authority budgets could put services for a particularly vulnerable group of people at risk”.