The Think Twice campaign, launched today by Balance, the North East Alcohol Office, and Breakthrough Breast Cancer, aims to increase awareness of the link between alcohol and breast cancer, encourage women to take stock of their alcohol intake and if necessary – cut back. 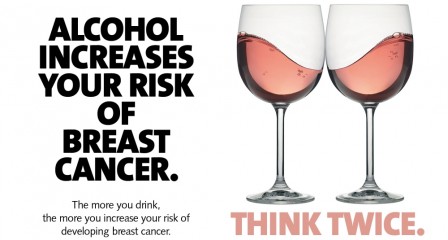 Regularly drinking alcohol – even just one drink a day – increases a woman’s risk of developing the disease, which is the most common cancer in the UK. However, two thirds of women in the North East don’t realise that the more they drink the greater their risk of breast cancer.

To coincide with the start of Alcohol Awareness Week, the campaign will launch on the region’s airwaves with a radio advert featuring the North East TV star, which will feature alongside an online film – also voiced by Charlie (see below) – which highlights the alcohol and breast cancer link.

In the advert, Charlie says: “I’m a worldly woman and I’d like to think I’ve gained a bit of knowledge in my time. But I’ll tell you something, I didn’t know about the proven links between alcohol and breast cancer. Until now.

“The more you drink the more you increase your risk of developing breast cancer. Now there aren’t many ways we can reduce our risk. But limiting the amount we drink is one. And that made me think twice.

“I just thought, ‘isn’t this something women should know about?’ Which is why I support this message from Breakthrough Breast Cancer and Balance.”

Colin Shevills, Director of Balance, said: “Breast cancer is a devastating disease that affects thousands of women across our region. Alcohol is linked to thousands of breast cancer cases each year across the UK so anything that can be done to raise awareness of this issue is vitally important. This is why we have launched our Think Twice campaign.

Here in the North East, around two in three women are unaware that the more they drink the greater their risk of breast cancer. That’s a significant proportion and we need to raise awareness.

Although there are many uncontrollable factors that increase a woman’s risk of developing the disease, such as genetics and age, there are a few things women can do to reduce their risk. Limiting the amount of alcohol they drink is amongst the most significant of these.

Department of Health guidelines recommend no more than 2-3 units a day for women and a maximum of 3-4 units a day for men, with at least 2 alcohol free days per week. There are 2 units in a standard 175ml glass of wine and 3 units in a pint of strong lager, beer or cider.

Please follow the link to the Balance North East website to find out more about the campaign.