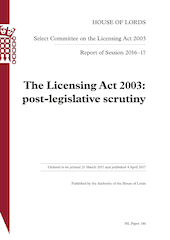 A cross-party committee of Lords has reached scathing conclusions about the workings of the 2003 Licensing Act, concluding that ‘the Act is fundamentally flawed and needs a major overhaul.’ On the evidence presented here, and elsewhere, this can be considered a fairly accurate conclusion. Yet, before assessing the Lords’ recommendations, it is worth taking a closer look at the problems they highlight, which are only half diagnosed. In fact, the report gives an overly administrative account of the Act, focusing on procedures and formalities, while overlooking problems with how it is applied and decisions made in practice. As such, some of the key factors contributing to the problems described are simply not mentioned.

‘Something of a lottery’

The Lords found evidence to suggest that licensing decisions are ‘something of a lottery’; they lack formality and professionalism, along with some ‘scandalous misuses of the powers of elected local councillors’. They recommend some specific, and probably useful, changes to the Sec 182 Guidance which gives advice on using the Act, along with a general call for better training, but do not specify exactly what problems such training should address.

One of the key reasons why licensing decisions can be ‘something of a lottery’ is that the Act is applied in an inconsistent way between local authorities; decisions can be made in fundamentally different ways between areas, but we hear nothing about this in the report. Evidence, for example, is given different weight and consideration between areas, with some unnecessarily aiming to prove decisions beyond reasonable doubt, whereas others apply the Act as written by looking to make decisions based on a balance of probabilities.

Many local authorities apply the misleading and not properly supported ‘premises by premises’ approach, where a premises is seen to be isolated from its geographic location. Others take a more rounded view of ‘what is appropriate in a particular location’, as supported by case law. And while some local authorities take a strategic and long term view of how licensing might develop in their area, akin to the planning system praised by the Lords, others take a very short term and bottom up approach.

We hear nothing about these significant differences in the application of the Act in the Lords report – this is a big omission. It also begs the question of why such a well resourced and seemingly comprehensive report has this big gap in it, but it seems that the Lords’ were keener on criticising licensing committees than helping them use the Act in a more comprehensive and authoritative manner.

The report also misses opportunities to highlight good practice and showcase examples of local authorities using the Licensing Act in a proactive and effective way. Furthermore, while it does include evidence that licensing had become ‘too political’, with some local authorities ‘frightened of making a tough decision’ in case they faced costly appeals brought by big drinks companies, it does not link this as another factor hampering local authorities and the application of the Licensing Act. It should be.

But having looked some of the key issues missing from the report, what about the recommendations?

Licensing as a form of planning

This is an interesting idea that some local authorities already carry out to varying degrees, although arguably a higher standard of training all round would solve the problem as effectively (but calls for better training don’t make for good headlines). The Lords also suggest that licensing appeals should be heard by an equivalent of the Planning Inspectorate, an idea suggested by Phil Hadfield in 2007 which definitely merits consideration.

The report gives welcome support to Minimum Unit Pricing (MUP), but in a slightly predictable way. If MUP is implemented in Scotland and shown to work (both of which seem likely), it stands to reason that there will be strong pressure on Westminster to follow suit – the report’s recommendation is just a reflection of this. Given the overwhelming evidence in support of MUP, a more far reaching report would have recommended implementing MUP in parallel with Scotland if the court case is won this summer, including the sunset clause prompting a repeal of the measure if it is unsuccessful after five years.

The report does highlight the significant shift to home drinking and the fact that the Licensing Act is poorly designed for this, recommending:

This is welcome and sensible, but less far reaching than current recommendations to address this issue made in Ireland. Regrettably, the Government has also ruled out any action on multi-buys, a short-sighted move taken before some of the more recent evidence was published.

The committee does not recommend adding health as an additional licensing objective, putting forward a rather one-dimensional argument that omits some of the more positive evidence received on the issue. In addition, there is no discussion about how health as a Responsible Authority* under the Act can strengthen its involvement using the existing legislation.

The recommendation to allow local authorities to set their own licensing fees is absolutely welcome, with fee levels not having increased since the Act came into force and many local authorities having to subsidise their licensing work out of general funds. Given the current economic climate, this is becoming increasingly difficult.

While there is not space to explore them properly here, the dismissal of Late Night Levies in favour of Business Improvement Districts is an example of the report’s business friendly nature. Evidence for the effectiveness of both of these options is scarce but the trade friendly option comes up trumps seemingly for no reason other than to satisfy the trade’s preference for self-regulation.

Indeed, while the report is critical of some industry voluntary schemes, especially the Government’s Responsibility Deal, it is inconsistent and applies less scrutiny to local voluntary schemes. The Committee’s point that ‘many of the worst operators will probably never comply with voluntary agreements’ is just as true at both a local and national level, however.

While there are a wide range of other points which I don’t have space to address here, overall, this report is interestingly detailed in some administrative respects, but very short-sighted regarding the application of the Act’s decision-making process. Local authorities have been roundly condemned without properly discussing some of the key problems and obstacles they face, or suggesting meaningful ways to address them.

From a licensing perspective, the fact that all the headlines focused on MUP and planning committees is regrettable; the danger is that debate about this report will focus on some rightly scandalous anecdotes before skipping quickly on to these eye-catching recommendations, while avoiding more substantial debate about the root cause of the problems and how the Act can be applied more rigorously and consistently.