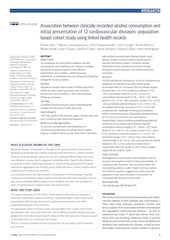 Most previous studies on the topic of alcohol and cardiovascular disease have looked at whether different levels of consumption are associated with a higher or lower risk of developing any type of cardiovascular disease. Usually these studies have found what is referred to as a J-shaped risk curve, that is those who do not drink and those who drink a lot are more likely to develop heart disease than those who consume moderate amounts of alcohol. However, there are lots of different types of cardiovascular disease, with distinct underlying biology, so it is not necessarily so that alcohol would affect risk of developing them all in the same way. Grouping together disorders may therefore obscure subtle differences that may be present across diseases. This is important because, for example, it is often reported that drinking a small amount of alcohol may be “good for your heart”, but if this relationship is driven by a handful of diseases and there is no difference or even an elevated risk for a variety of other disorders, then we are not communicating the full picture so that people can make a better-informed decision about their level of alcohol intake.

But a major problem is that some types of cardiovascular disease are rarer than others, so in studies where investigators track a group of individuals over time, enough people might not develop the disease to be able to reliably test whether there is a difference in risk by drinking category. There are studies that have looked at individual cardiovascular diseases in the past, but these are relatively few in number, small in size and have other well documented biases present – especially concerning the group of non-drinkers, which often, but not always, has consisted of a mixed bag of never drinkers, people who drank in the past but no longer do, perhaps quitting due to ill health, and those who only drink alcohol on an occasional basis. There is a lot of debate in the field as to whether combining these groups is perhaps the reason why we observe that non-drinkers appear to have a higher risk of heart disease than moderate drinkers.

So the purpose of our study was to try and address these limitations; that is we aimed to examine the association between alcohol consumption and the initial life time presentation (i.e. the first cardiovascular disease that an individual was diagnosed with) from a selection of 12 of the most common symptomatic cardiovascular diseases whilst simultaneously doing our best to separate different current non- or infrequent drinking groups, all within a single study.

To do so we used a variety of existing electronic health records. We linked databases containing information on a patient’s alcohol consumption as recorded by their GP or practice nurse with disease and death registers as part of the CALIBER (ClinicAl research using LInked Bespoke studies and Electronic health Records) data resource. There were numerous advantages of doing this. Firstly, we were able to create a dataset representative of the general population at considerably greater scale than previous studies. Using existing health records also helps to minimise selection biases as the data we used was collected as part of routine clinical practice and therefore did not require participants to enrol as well as complete and return questionnaires as is necessary in bespoke, investigator led studies. An additional advantage was that the data we analysed is that which is used in the “real world”, as it where, so our findings have direct clinical implications as they are based on the information a clinician would use in routine clinical practice when deciding what treatment or advice to provide to a patient.

While a great deal of the focus in the media thus far has perhaps unsurprisingly been on the comparison between non- and moderate drinkers, as the NHS “behind the headlines” coverage of our article notes, this is rather an over simplification of our findings. We found that the association between alcohol consumption categories was not consistent across the 12 different types of cardiovascular disease that we studied. That is, there were some types of disease, including major events such as heart attacks and heart failure, where we observed that non-drinkers were more likely to have as their first diagnosis than moderate drinkers, however, for other types of cardiovascular disease, such as haemorrhages in and on the surface of the brain, transient ischaemic attacks – so called “mini-strokes”, and cardiac arrest/sudden coronary death, we did not see such differences in risk. This challenges the view that moderate drinking is universally associated with a lower risk of all types of cardiovascular disease.

It is also worth noting that heavy drinkers had a higher risk of presenting to health services with seven of the 12 cardiovascular diseases we examined in comparison to moderate drinkers, including endpoints such as heart failure, cardiac arrest, ischaemic stroke and death from coronary heart disease without any prior symptoms. The significance of looking at specific cardiovascular diseases and not only aggregated outcomes really shines through here. Results for combined cardiovascular disease endpoints, particularly “any coronary heart disease”, concealed this – heavy drinkers appeared to differ little in their risk from moderate drinkers but this seems to have emerged because of opposing associations with different diseases. Specifically, those classified as heavy drinkers had a reduced risk of heart attacks and stable angina being their first diagnosed cardiovascular disease but a substantially greater risk of many of the outcomes listed above (see figure). 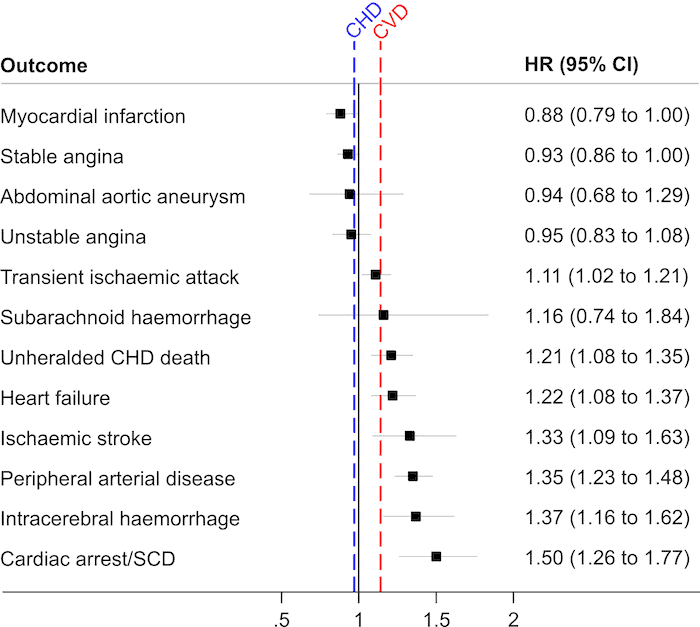 As we describe in the paper, it is possibly unsurprising that we encounter such heterogeneity. Findings from observational studies have shown that the metabolic profile of alcohol consumption appears to be exceptionally complex, consisting of both favourable and adverse perturbations in a variety of cardiometabolic biomarkers. Obviously, residual confounding is a concern in any observational study (including ours) but there is evidence from trials and Mendelian randomisation studies (a method that uses genetic variants associated with greater odds of non-drinking and lower levels of alcohol intake in drinkers as a proxy for alcohol exposure) that alcohol is causally associated with a variety of cardiovascular biomarkers (including non-linear associations). While several of these traits are now deemed unlikely to have a causal role in the development of coronary heart disease (e.g. high-density lipoprotein cholesterol, fibrinogen and adiponectin) some are considered true causal risk factors. The importance of looking past aggregated outcomes and in the direction of specific diseases is further underscored by findings from studies that have shown that even conventional cardiovascular risk factors, such as blood pressure and smoking, do not seem to have uniformly strong associations with the occurrence of all types of cardiovascular disease.

Ultimately it is an exciting time for epidemiological research. With a paradigm shift towards personalised medicine and the accompanying explosion of big data, new technologies and ever more sophisticated analytic methods we are in a position whereby we really will be able to begin to understand the finer details of disease (and through doing so improve their prevention and treatment). Harnessing the power of linked electronic health records (as we did) or large scale biobank initiatives will enable us to make novel discoveries (including in a hypothesis-free manner) that just simply would not have been feasible previously. But following up on such findings to determine whether they are causally relevant and the pathways through which they operate to influence risk of disease is crucial. This is being made increasingly possible through the integration of multiple ‘omic’ layers (e.g. genomics, epigenomics, transcriptomics, proteomics, metabolomics, lipidomics, etc) where we are now able to begin reconstructing the intricate molecular network underpinning complex lifestyle diseases. As well as the surge of findings from genome-wide association studies being made publically accessible and the development of statistical methods (plus availability of easy to use computer programmes and web tools) that leverage these to make it viable to test causal hypotheses even without access to individual level data.

In reality, we are only just starting to scratch the surface of what is possible, but one thing is clear – the deeper we go, the more we know.

Written by Steven Bell, Genetic Epidemiologist at the University of Cambridge.