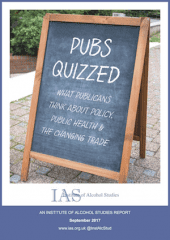 Proponents of evidence-based policies to reduce alcohol harm are used to seeing pubs as an obstacle. Proposals for minimum unit pricing are dismissed as “the worst thing that could happen to the industry”. Calls to reduce the drink-drive limit in England and Wales to bring it into in line with Scotland and the rest of Europe spark fears of pub closures. Arguments that the government should raise taxes on alcohol to curb its affordability run into the concern that this will ‘ruin’ pubs and kill jobs.

Yet our new report, Pubs Quizzed: What Publicans Think About Policy, Public Health and the Changing Trade, summarising the findings of our nationally representative survey of publicans, offers hope for common ground between the pub trade and public health advocates. In particular, we identify a common enemy: cheap alcohol in the off-trade.

Groups like the Alcohol Health Alliance are used to demanding government action on ‘pocket money prices’ in supermarkets and off-licences, with the cheapest ciders on sale for 16p per unit, and the cheapest beer just 28p per unit. Yet we found such cut-price products cause just as much consternation among publicans, who feel unable to compete (the average beer in the on-trade costs £1.43 per unit). Supermarket competition was identified as the single greatest threat to pubs, with 48% rating it among their top three concerns.

This is not solely a matter of self-interest. Many publicans accept that there is a problem with harmful alcohol consumption – 44% say that the UK has an unhealthy relationship with alcohol – and this is largely attributed to low prices. According to one respondent, “Cheap supermarket prices does more harm than hitting the pubs. It starts the youngsters drinking and acquiring a taste too early in life”. All told, 83% believe supermarket alcohol is too cheap, and 73% think that raising its price should be a priority for politicians seeking to tackle alcohol-related harm.

One response would be to introduce a minimum unit price (MUP) for alcohol. If this were set at 50p per unit, the price of around half the alcohol sold in the off-trade would increase, but less than 1% of on-trade sales would be affected. Our survey found overall support for the measure, with 41% in favour and 22% against.

To what extent would you say you support or object to minimum unit pricing for alcohol?

Another option is to raise alcohol duty, which appears to reduce the price gap between pubs and supermarkets. 72% of publicans would favour higher taxes on alcohol sold in supermarkets. The problem with this is that any increase in duty would also be levied on pubs, which would be deeply unpopular among publicans. Yet, while it would be surprising for publicans to embrace higher taxes, it was notable from our interviews that duty was seen as less of a threat to pubs’ success than business rates (it was ranked tenth), and that it was relatively far down the list of factors blamed for pub closures (where it was ranked seventh).

What do you think are the main causes of pub closures in recent years? (% Ranking in Top 3)[1]

What this suggests is that pubs may be willing to accept higher rates of duty if this were offset by cuts to other unpopular taxes such as business rates and VAT. Such a move would also have the advantage of incentivising pubs to shift towards food rather than drinks sales (which would likely bring commercial benefits, too).

There are other areas where pubs are likely to be amenable to policies pursued by public health advocates. 58% of publicans in England and Wales support a lower drink drive limit. 69% are in favour of the health and wellbeing of the local area being taken into consideration as part of the licensing application process.