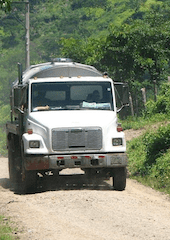 There is uproar in global health circles. The Global Fund to fight AIDS, Tuberculosis and Malaria and Dutch beer brewer HEINEKEN have entered into a partnership: HEINEKEN will pair supply chain experts with logistics planners at the Global Fund. HIV medication will thus reach their destination faster and in better condition, also covering the so-called ‘last mile’: those places in low and middle income countries that are notoriously hard to reach.

Sounds fair. The Dutch beer brand is probably already familiar with those miles, so making use of their infrastructure sounds like an obvious solution to serious and persistent logistical challenges.

Even so, there is great opposition. The NCD Alliance, a worldwide network of over 2000 organizations from more than 170 countries working together to combat non-communicable diseases, has written an open letter to the Global Fund, “to respectfully urge [them] to immediately end this partnership”. They point out, amongst other issues, that alcohol is a major risk factor for tuberculosis and HIV, and refer to a clear conflict of interest: HEINEKEN will benefit from the positive image surrounding this partnership, diverting attention from the problems associated with harmful use of alcohol and from their lobbying efforts to prevent implementation of effective alcohol policies.

Wemos endorses the NCD Alliance’s point of view. Of course, we see the added value of well-functioning, existing logistical channels, and we are acutely aware of the big problems in public distribution channels in low and middle income countries. But partnerships with private sector parties are not only advantageous; they have serious pitfalls.

For example, private parties will experience an increase in brand awareness and an improvement of their public image, which will translate into higher sales. That is why an assessment should be made, beforehand, of the desirability of such an increase, or if this will actually sabotage your goals. A product like beer carries a red alert: you don’t want that.

Another real risk is that partnerships such as these work in parallel systems, which undermine the role and responsibilities of local governments. This is usually accompanied by shifts in budget and personnel, redirected from local institutions to the new parallel system. This compromises the effectiveness of local government and weakens the public’s confidence in their government. You don’t want that, either.

Wemos believes that the Global Fund, and its possible partnerships, should invest in the development of logistical supply chains within the health system of the recipient countries, not in parallel with it, and not with a partner that also delivers beer. The National Medical Stores and existing supply chains should be (or become) the most important delivery channel, however weak or ‘leaky’ they (still) may be in many countries. The Global Fund has been investing amply in such systems in many places, so they can build on vast experience.

Not only patients with malaria, HIV/AIDS or TB will profit from such investments in supply chain systems: all population groups will. Women and men needing condoms for family planning purposes. Children who are waiting for their vaccinations. People with diarrhea who may be cured with Oral Rehydration Salts. Midwives in need of gloves for safe deliveries.

Norway, one of the top ten donors to the Global Fund, has announced that they cannot support this type of partnership with an alcohol company. The Netherlands are also an important supporter of the Global Fund; in addition, we are currently a member of its Board. Is our government going to make a similar statement? Will they be looking for an alternative for HEINEKEN, so that people with HIV/AIDS, TB, malaria and all other conditions receive the care they need? Striving to ‘reach parts others can’t’, would contribute immensely to good and reliable government health services.

Written by Corinne Hinlopen, Global Health Advocate at Wemos, a NGO for global health advocacy and analysis, based in Amsterdam. This article was originally published on the Wemos website (www.wemos.nl) on Monday 12 February. The title and last sentence of this blog are inspired by the English language HEINEKEN slogan, as found on http://brookstonbeerbulletin.com/beer-slogans/.