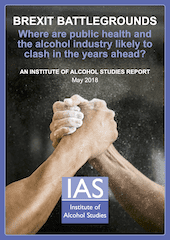 Brexit is the dominant political issue of this generation in the UK, and its impact will be felt in almost every domain of policy – including alcohol policy. In a new report, Brexit Battlegrounds, we review the key policy objectives of public health and alcohol industry groups to try and establish the key dividing lines and issues at stake for the years to come. For both sides, the UK government’s renegotiation of its relationship with the European Union, as well as its attempts to forge trade agreements with new partners, represent both threats and opportunities.

From a public health perspective, the most ambitious defensive goal is to secure a ‘carve out’ from future trade and investment agreements, which would explicitly protect public health measures from being legally challenged by the alcohol industry. Yet formulating an effective carve out is extremely tricky. The tobacco carve out from the Trans-Pacific Partnership was criticised for being too narrow (ignoring other public health issues), and leaving gaps (it permitted government lobbying and did not cover certain provisions such as trademark protection). However, a modest step in this direction is the proposed ‘Do No Harm’ amendment to the EU (Withdrawal) Bill, which commits the government to give priority to public health in future trade negotiations.

Some see Brexit as an opportunity to improve public health policies in areas where EU regulations have previously been an obstacle. For example, EU Directive 92/83/EEC requires governments to tax wine and cider according to their volume, rather than their alcohol content, with the consequence that stronger wines and ciders attract lower duty per unit. Alcohol is currently exempt from the EU’s Food Information Regulation, and so unlike food and other beverages, there is no legal requirement for drinks producers to list ingredients, calorie and nutritional information on their labels. EU law is ambiguous on alcohol marketing restrictions, permitting France to ban sponsorship and television advertising, but requiring Sweden to reverse a ban on print media advertising.

Alcohol industry groups are far more detailed and wide-ranging in their proposals for post-Brexit policy. Many of their objectives reflect a desire to minimise disruption to the status quo – ensuring a sufficient supply of trained labour, minimising bureaucratic changes to the excise system and retaining the legal protections associated with Geographical Indications such as ‘scotch whisky’, which can only be used to market authentic and authorised products. These do not have clear relevance to public health.

Other industry policy initiatives are more ambiguous in their implications for public health, and should be regarded with caution. Industry groups are calling for the government to use its greater flexibility on alcohol taxation to reduce duty on lower strength products – which may bring health benefits, but may merely encourage people to drink more overall. Efforts to maintain the free trade guarantees already secured by the EU may help keep alcohol prices low, but it is not clear that public health groups should respond by seeking restrictions on the import of alcohol or ingredients in the production process, rather than through direct pricing policy.

However, there are three major areas of threat to public health from industry groups. First, there are areas of direct policy conflict. Whereas public health NGOs urge the government to raise duty to reduce alcohol affordability, alcohol trade associations appear to be using Brexit to encourage tax competition between the UK and other governments. Whereas public health groups are seeking stricter labelling requirements, the industry resists these regulations as a ‘non-tariff’ barrier to trade.

Second, there are efforts by the industry to increase its policy influence. The Scotch Whisky Association has suggested the establishment of a trade policy advisory network to encourage “dialogue” between government and industry. The Wine and Spirit Trade Association has been bolder still and started negotiations on a ‘model trade agreement’ without the government, alongside its counterparts in Australia and New Zealand. Given the complexity and opacity surrounding trade and investment agreements, these initiatives could provide the alcohol industry with a significant advantage over public health groups in terms of shaping post-Brexit policy – and as such, should be closely scrutinised.

Third, public health groups should be alarmed by the efforts of the alcohol industry to use Brexit to increase their access to emerging markets. The prime example here is India – a country with high tariffs on alcohol to restrict the influence of multinational drinks producers. Even prior to Brexit, the UK government has been criticised for its role in supporting British alcohol producers in low and middle-income countries, lobbying foreign governments to loosen regulations. Brexit could worsen this dynamic.

There remains considerable uncertainty around Brexit, both in general and specifically in relation to alcohol. Nevertheless, we can draw three emerging conclusions about the likely shape of the debate to come in alcohol policy. First, certain policy areas are highly likely to be the focus of contention – specifically, tax, labelling and marketing. Second, the process of forming policy and trade agreements matters as much as the substance: consequently, the extent to which industry guides or shapes agreements – and the extent to which public health groups are excluded – may prove to be crucial. Third, given the strong pushes to open up emerging markets, the consequences of Brexit for alcohol policy may have repercussions far beyond these shores.