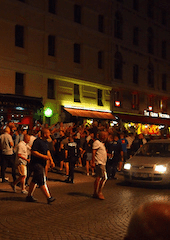 I enter this arena of debate, much as I do every other, with no alcohol and no harm meant. Which is more than could be said for the thugs involved in the mass brawl that marred the opening raceday of the 2018 season at Goodwood Racecourse.

Press reports of a fracas involving up to 50 people were confirmed by Sussex Police, with footage finding its way onto social media. And violence erupted at the famous Ascot racetrack days later, with one racegoer remarking that the perpetrators were ‘Stella fuelled cokeheads who go out of their way looking for a fight.’ Goodwood racehorse organisers have since imposed a four-pint rule, which at eight to 12 units in a sitting still allows for binge drinking by the government’s own definition, despite having a drinking policy ‘committed to reducing social harm caused by the excessive consumption of alcohol’.

Thankfully, incidents of crowd violence across the 60 British racecourses and 1,500 fixtures that attract some 6 million racegoers per year are rare. But this is more than just a little horsing around. It seems alcohol is an all-too regular accomplice to spectator violence, one that risks damaging both the reputations of the so-called Sport of Kings and other disciplines which place great emphasis on the sophistication of their clientele.

Take that ruffian’s game played by gentlemen, for example. Despite the widely-publicised instances of alcohol-related hostilities among fans at the Principality Stadium in Cardiff during last year’s autumn internationals, an investigation held by the Welsh Rugby Union found that the number of people ejected from the venue did not rise. Still, the governing body plans to trial an alcohol-free zone ahead of this year’s series of matches, having identified a customer group who ‘would welcome’ one, according to Chief Executive Martyn Phillips.

Yet, there are many spectators – the ‘vast majority’, says Phillips – for whom having a drink is ‘an important part of the match-day experience’. Rugby is one of many areas of society where the Drinkaware defence endures – we drink responsibly, unlike them – while in football, all fans are them.

British Transport Police (BTP) Chief Inspector for Wales Mark Cleland’s assessment of the situation cast doubt on this fashionable view. Cleland said: ‘Football is still an issue for BTP across the country, but historically rugby creates its own problems because of the embedded drinking culture surrounding the sport. As a result, we often see poor behaviour post-match. Football is heavily legislated with banning orders etc while other sports are not.’

The key distinction Cleland refers to resides in the Sporting Events (Control of Alcohol etc.) Act 1985 which originally stated that alcohol may neither be sold nor purchased in view of the pitch for a period lasting from two hours before a match until one hour afterwards. However, even at the time, the designated dry period was deemed too draconian by MPs and was subsequently reduced to ‘15 minutes before a match until 15 minutes afterwards’.

And calls to lift the ban – under the guise of ‘levelling the playing field’ between football and other sports spectators – have persisted since. The Scottish Football Association sought to ‘build a case’ in favour of doing so as recently as 2015. Former Scottish Labour Party leader and cheerleader-in-chief Jim Murphy claimed that permitting drinking during matches would ‘improve the experience of the supporter’, perhaps betraying a limited view of the average football fan’s propensity for enjoying the Beautiful Game.

Other critics have pointed out that today’s average match-day experience ‘bears little resemblance to the pre-Premier League environment of the 1970s and 1980s’, and the law fails to take into account the sanitisation of stadiums right across League football, as the affluent middle classes feel that they can attend modern stadiums with their families ‘with little risk of encountering danger’.

Indeed, it is largely true that violence at football grounds is no longer habitual. However, crass generalisations about the implied behaviour of working class football fans aside, this argument denies the fact that restrictions in alcohol availability have helped to engender that family-friendly environment.

Some (make the evidence-free) claim that the ban inherently hinders responsible drinking, inducing punters to imbibe in both pre-match and half-time rushes to compensate for in-game prohibition. The truth is that as a licensed venue, sporting grounds risk prosecution if they fail to uphold their legal responsibility to prevent drunken behaviour, by refusing to serve intoxicated persons and / or removing them from their premises should they disturb the peace – all mandatory conditions that are no different from your regular pub landlord. And like the pub landlord, enforcement is any licensed premises’ top priority in preventing disorderly behaviour, the effectiveness of which depends on the strength of the relationship between the licence holders and the relevant local authorities.

Of course, alcohol does not cause violence per se. A 15-year ethnography of English football supporters and the effectiveness of social control policies upon them found that in some cases, a number of restrictions imposed by authorities – and police under-enforcement of them – led to a flaunting of the rules among some groups of travellers to stadiums, and an increased level of risk for violence between rival teams of fans. The authors point to the European Football Championships in Portugal in 2004 and the World Cup in Germany 2006 as positive instances of peaceful alcogenic sporting environments.

But is more freely available alcohol the answer, given our nation’s reputation? The laissez-faire café culture approach to policing alcohol consumption did us no favours on the streets of Marseille during UEFA Euro 2016, and as a result, it is English spectators who face drinking restrictions at the 2018 FIFA Men’s World Cup.

So I doubt that having a drink during the game makes for either a better viewing experience or a more inclusive fan environment at football grounds. If anything, given the current spate of violent incidents at non-football sporting grounds, I wonder why we haven’t extended the alcohol ban to all sporting grounds?

Perhaps it is because no other sports have attained football’s notoriety. But why risk it? One sports journalist who, with her uncle, was subject to verbal abuse from drunken rugby fans during one of the autumn series matches at the Principality Stadium told the media that she had noticed more of a drinking culture at matches in recent years. ‘I genuinely think someone’s going to get seriously hurt,’ she predicted.

If we carry on as we are, I fear she may be proven right.

Written by Habib Kadiri, research & information officer at The Institute of Alcohol Studies.