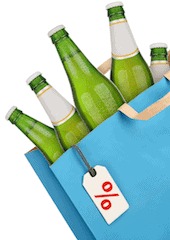 If we examine the data though, these perceptions do not seem to reflect reality. The chart below shows NHS Digital’s alcohol affordability index, calculated for beer in the on-trade (pubs, clubs, bars and restaurants).

It shows that in 2016 (the most recent available data), beer in the on-trade was incredibly affordable by historical standards. In the near 30 years the Office for National Statistics has been tracking beer prices, only in 2007 has on-trade beer been cheaper relative to income. Since 1987, the price of beer in the on-trade has risen by 31% relative goods. However, real disposable incomes have risen by 72%. The net result is that a pint of beer in the pub accounts for a much smaller share of an average person’s budget than it has done for most of the recorded past.

CAMRA have used the survey to call for a real-terms cut in beer duty in November’s Budget in order to support pubs. This argument is based on dubious logic, as I discussed in this piece a couple of years ago. Academic evidence indicates that prices of cheap supermarket alcohol will fall by more than pub prices in response to a duty cut. Indeed, pub owners have frequently objected that duty cuts are pocketed by brewers and not passed on to them. Given that being undercut by supermarkets is the seen as the leading economic challenge of most publicans, a duty reduction that helped supermarkets reduce their prices still further would be perverse.

A duty cut would be a false economy in another way. At a time of acute pressures on public spending, it is hard to see why further reducing alcohol duty should be a Government priority. The rate of beer duty is already 16% lower in real terms than it was in 2012, and the Government recently admitted that cuts to alcohol duty have cost the Exchequer £4 billion over the last five years – enough to employ over 100,000 teachers for a year. That does not account for the additional cost to the NHS resulting from higher levels of consumption.

Whether people realise it or not, beer in pubs has rarely been so affordable. In any case, a cut to beer duty is not the answer if the Government wants to support struggling consumers and pubs. In light of the £3.5 billion cost to the health service from alcohol-related conditions, and the ever growing cost to the Exchequer from past duty giveaways, it is the Government that can’t afford to cut taxes on alcohol.