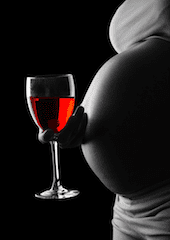 Alcohol and pregnancy is a topic that evokes both strong opinions and extensive media coverage whenever a new study is published. A well-cited article from 2017 showed that in the UK, two out of five women drink alcohol at some point during their pregnancy. One example that followed was a headline in The Telegraph proclaiming that this drinking rate was “one of the worst in Europe”.

There is no doubt that high levels of alcohol consumption during pregnancy can lead to serious outcomes for the developing baby, however there is a lack of evidence for the impact of low levels of drinking. This was concluded in a recent synthesis of the available evidence, yet with the caveat that “absence of evidence is not evidence of absence”. For this reason it is very difficult to say for sure what will happen if a woman drinks alcohol during pregnancy. This is the basis of adoption of the so-called ‘precautionary principle’ or ‘better safe than sorry’ in 2016, whereby the Chief Medical Officers (CMOs) in the UK issued an updated recommendation advising pregnant women to abstain from alcohol. The change has followed a shift, adopted in many other countries, to advise complete abstinence due to the lack of evidence for establishing a safe level of drinking during pregnancy.

With a high reported prevalence of alcohol use during pregnancy in the UK, as researchers we ask ourselves two questions: 1) why do pregnant women drink alcohol?, and, 2) how can we prevent harm caused by prenatal alcohol exposure? Whilst exploring factors that may be associated with prenatal alcohol use, which we along with many others have done (here, here, and here), exploring the role of health professionals is an important part of the puzzle. In a recently published study, conducted before the new CMO guidelines were issued, we found that the risk perception of English and Swedish midwives differed. Whilst Swedish midwives tended to associate any drinking with risk, English midwives suggested that small amounts may not be harmful and that as guidelines have changed over time, it is difficult to know the correct advice to give women. However, all midwives strongly believed that abstinence was the best advice to give – due to its simplicity and clarity, along with the uncertainty of risk when drinking at low levels.

A small study exploring midwives views and opinions of course might not tell us the whole story. From the literature we know that in countries like the Netherlands or Australia, where complete abstinence is endorsed, some midwives diverge from the advice due to uncertainty of whether drinking small amounts is associated with harm or to make exceptions for occasional drinking. We also know that staff attitudes, enquiring about alcohol not being a priority task, lack of skills and resources and under-reporting by women (examples here and here) might prevent a proper discussion about alcohol from taking place in the antenatal care setting.

There is, however, not much research on what the situation is in the UK context following the updated guidelines from the CMOs in 2016. One recent study looked at the interpretation and views on the new, abstinence-based, recommendations among midwives, new mothers, alcohol policy practitioners, and people from third sector organisations. The study found that whilst the CMO guidelines were intended to provide a clear and simple message, in reality they were perceived in a far more complex manner and that there are nuances in the recommendations that need to be further explained. This, the authors found, related to issues around what to tell women who drank before they knew they were pregnant. In our recent study we also found that midwives were unsure how to advise women who had continued to drink alcohol in the period before knowing about the pregnancy – they want to do good and relieve a woman’s anxiety, as the risk of harm to the foetus might be small, but because the evidence is inconclusive, complete reassurance could not be given to the woman.

Given that the CMO guidelines have not universally been understood in the simple manner they were intended to be, more work is needed to explore midwives’ work in implementing the guidelines and any barriers to do so. This is what our current research, funded by the Institute for Alcohol Studies, is looking at. The study, called MAMA (Midwives’ Assessment of expectant Mothers’ Alcohol use), aims to explore the implementation of the CMO guidelines amongst midwives in the UK. We hope that the results will further inform practice to ensure that midwives have the skills, training and resources needed to support pregnant women.

All IAS Blogposts are published with the permission of the author. The views expressed are solely the author’s own and do not necessarily represent the views of the Institute of Alcohol Studies. Authors are pictured below.