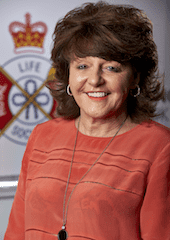 In my role as CEO of the UK’s drowning prevention charity the Royal Life Saving Society UK (RLSS UK), I am all too aware that the number of drownings increase in the winter period, more often than not because of intoxication.

But when the tragedies affect the communities that I am part of, the messages we give out to try to keep people safe become so much more poignant.

Just a few months ago a young man heartbreakingly lost his life in Worcester, where RLSS UK has its head office, and I have seen the after effects of a number of drownings of young people in my home town.

As part of our national Don’t Drink and Drown campaign, this year running from 3–9 December, we work with organisations up and down the country, putting on awareness events and activities and urging revellers to take care near water whilst under the influence of alcohol.

People tragically die each year because they’ve entered the water with alcohol in their bloodstream, either deliberately or completely by accident. Drinking near or in water can be a dangerous and deadly cocktail and alcohol can seriously impede your ability to survive in water.

Over the last five years there have been 1,581 accidental deaths in the UK and almost 30% of the victims (346) had alcohol in their bloodstream.

In 2017 alone, there were 75 alcohol related drownings recorded, compared to 53 the previous year, which shows a staggering 41% rise.

The Don’t Drink and Drown campaign was launched in 2014 following a string of tragic drownings of young people. Research indicated that around a quarter of all adult drowning victims had alcohol in their bloodstream. RLSS UK was keen to prevent more tragedies, by targeting at risk groups in hot spot areas at particular points in the year where alcohol related drowning incidences increase – September (at the start of the new university term) and December (during the festive period).

We want everyone to have a great time this Christmas and through our Don’t Drink and Drown campaign we aim to give essential advice to party-goers to make sure they know how to stay safe when they’re out celebrating.

When walking home from a night out, avoid routes that are alongside water, particularly in the darkness, and always stay with and look out for your friends.

We couldn’t reach the number of people we do across the regions without the invaluable support of other organisations, including a wide range of fire and rescue services, police, local authorities, bars and businesses across the UK, as well as the Canal and River Trust, RNLI and the Environment Agency.

As part of the campaign volunteers host stalls at busy shopping areas and walk the queues at popular waterfront establishments, talking to people about the dangers of walking home near water after a night out drinking. Bars, nightclubs and universities display posters, beermats and other resources with water safety messaging, and throwline training is given to door staff.