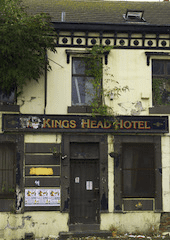 If you are reading this blog, you are probably aware that pubs have been closing at a dramatic rate in recent years. According to the British Beer & Pub Association, there were 48,350 pubs in the UK in 2017, down from 56,900 in 2008. It is a trend that has caused no shortage of political alarm. For example, an Early Day Motion calling on the government to do more to support pubs was signed by 112 MPs in May.

But did you know that despite these closures, employment in the pub industry is rising, and higher than it was before the recession? As the chart below, based on recent Office for National Statistics (ONS) analysis, shows, the number of workers in pubs and bars has been steady at around 400,000 for a number of years.

So why are so many pubs closing, even as the pub sector as a whole is bringing in more revenue? One possibility is that pubs are able to hang on to less of the money they generate – if costs have risen substantially, it may be that pubs have become less profitable. Yet there is little evidence that the costs of running a pub have significantly increased in recent years. The chart below uses data from the ONS’ Annual Business Survey, to plot total purchases (which includes wholesale food and drinks), employment costs and capital expenditure (investment in the business) as a share of total revenue for pubs and bars in recent years. It suggests there was low profitability in the sector during the recession, but that costs have remained fairly stable since 2010, and that any increase in costs has come mainly from investment. That is a story broadly confirmed by industry benchmarking surveys.

What all this suggests is that the pub sector as a whole is doing fine, but that it has become more unequal, with some pubs gaining market share and pushing out their less successful competitors. The size of the pie has remained the same, but it is split between fewer, bigger pubs. That is what the ONS’ analysis suggests, indicating that employment in the sector has shifted markedly towards larger pubs. It also fits with the anecdotal reports of pub managers, many of whom have linked the entry of chains like Wetherspoons into an area to the closure of local competitors.

If it is the case, as this evidence suggests, that recent pub closures have been primarily driven by competition, this has potentially important implications for how we see the problems faced by pubs. For a start, it cuts against any theory that identifies a lack of demand as the root cause of pub closures – including those that blame the recession, alcohol duty, off-trade competition, the smoking ban or the drink drive limit. While these may have had some impact between 2007 and 2009, from the data above it seems implausible to say that pubs are struggling in 2018 because of a lack of custom.

Of course, that does not mean that policies that seek to increase spending in pubs will not help. The competitive pressures that appear to be forcing smaller pubs out of business may be weakened if there is more revenue to share around. But it is also possible that most of the gains of such a policy will accrue to the larger pubs that are consolidating the market. If the government wants to address the root causes of pub closures, it is less clear what it can do – some sort of tilting of the playing field to favour smaller pubs, through tax or licensing or competition policy is likely to be necessary, though it may be tricky to do so legally.

In any case, this data should lead policymakers to reflect on what it is, exactly, that they object to about pub closures. Is it really the number of pubs that matters to them, or could it be something else? If their concern is about job losses and the impact on the economy, it seems clear that these worries are unfounded (and in any case, job losses in the pub sector will be offset elsewhere). If it is about the shifting role of pubs in British culture, that raises a much more complex set of questions of who goes to the pub, how frequently, why and what they do there. Most fundamentally, it raises the question of why policymakers should seek to resist this sort of cultural change. A third possibility is that concern for pubs is motivated by the fear that particular communities are losing a central ‘hub’. Again, this raises more questions. How many such areas are there? As of 2013, 85% of people in England lived within 500 metres of a pub or bar, and almost everybody had one within a mile. More research is needed to demonstrate that the scale of the problem justifies its political prominence.

What is evident, though, is that the decline of the pub is more complicated than it seems.

Written by Aveek Bhattacharya, policy analyst at the Institute of Alcohol Studies.