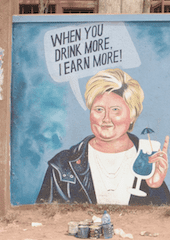 ‘When you drink more, I earn more’ says Erna Solberg, the Norwegian Prime Minster, on a wall in Uganda. We have painted her, together with Siv Jensen (Minister for Finance), on walls in Uganda as part of our new campaign called ‘Oljefondets alkoholproblem’ – directly translated as ‘the oil fund’s alcohol problem’. The campaign is advocating for a divestment of the Norwegian State Pension Fund (called ‘the oil fund’) from the alcohol industry.

A review by FORUT of the latest public list of investments in the fund (on 31 December 2018) indicated that there are at least 86 billion Norwegian kroner (US$9.8 billion) invested in alcohol producers, most of it in the biggest multinational companies. The ministry determines the fund’s investment strategy, following advice from among others Norges Bank Investment Management and discussions in Parliament.

Through our campaign, we would like to highlight the Norwegian contraction of great support to the UN Sustainability Goals (SDGs) at the same time as we invest in an industry that are contributing negatively to several of the SDGs.

The campaign is run by the organisations FORUT, IOGT in Norway, Juvente and Blue Cross Norway and was launched 31st May. On that day, we presented a report on Global Health and Alcohol (in English) together with a film presenting the topic and campaign was promoted in social media. After few days, the film has been viewed more than 60 000 times.

We are very satisfied with this number; we believe that many Norwegians support the argument that our money and future should not be benefiting from the investment and expansion of the alcohol industry in new markets.

A few days before the launch of the Oil Fund campaign, another big Norwegian investor – KLP Pension Fund – announced that they will divest from alcohol. KLP is the biggest private pension fund in Norway. They told the Financial Times that they will invest in ‘businesses which to a greater extent contribute to a safe and better world for everyone.’

You can see the campaign elements, reports (in English) etc. at the website www.oljefondetsalkoholproblem.no.