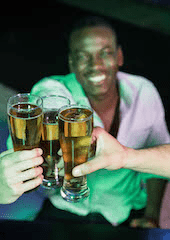 The multitude of malpractices recently revealed at Heineken in Africa did not prevent the organization of the Amsterdam Diner from putting the brewer in the spotlight at the annual gala dinner. Remarkable: Heineken is also the main sponsor of the event.

At the annual Amsterdam Diner, brewer (and main sponsor) Heineken received a prize last Saturday for the jury’s contribution to the fight against AIDS, in particular in Africa. A delegation of three African company doctors and the director of Heineken’s medical service received the trophy.

The Amsterdam Diner Award is awarded to an individual or company with ‘exceptional dedication and commitment to a world without AIDS.’ Former laureates include former minister Lilianne Ploumen (Foreign Trade and Development Cooperation) and the Dutch princess Mabel van Oranje. The proceeds of the dinner, organized in the AFAS Live event hall (the former Heineken Music Hall), are intended for the fight against AIDS.

The praise for Heineken is remarkable, given the recent series of abuses and scandals at the brewing company. For example, Heineken became embroiled in a major corruption case in Nigeria, played an important role in the genocide in Rwanda, and has been knowingly deploying promotional girls in Africa for almost twenty years, often victims of sexual abuse. In Burundi, Heineken is an essential pillar of the ruling dictatorship, and in Congo, the company worked with violent rebels to lay off a large group of employees.

At first glance, the AIDS program is undisputed. Since 2002, Heineken has been one of the first multinationals to provide free HIV inhibitors to HIV-infected African employees and their immediate family members in collaboration with the non-profit organization PharmAccess. It became a success story that spread across the world and was taken over by other companies. The costs were better than expected: the number of infections in staff turned out to be much lower than estimated. In total, there are around 500 cases in 17 years.

‘It is the smallest conceivable drop on a glowing plate.’ The former chief of medical service Henk Rijckborst put it into perspective when I interviewed him in 2017. The AIDS project did, however, also have negative consequences: approximately at the same time as the program was launched at the beginning of this century, it was announced that the promotional girls that Heineken used to boost sales in bars were often victims of sexual harassment and assault. Initially, the spotlight was on Cambodia, but at least since 2003 Heineken has known that young women in Africa had to work under similar circumstances.

Former Heineken manager Hans Wesseling, who was responsible for the file at the time, said about this, also in 2017: ‘We told the tale of our AIDS policy as far as the American Congress, where black representatives were very charmed by what we were doing in Africa. It gave our people in the United States a great story. Nobody was interested in crossing with African promotional girls who had to sell our beer under terrible conditions. That would rather be dismissed as a local custom: “That’s just how they do it there.”‘

It is also known that alcohol consumption contributes to the spread of sexually transmitted diseases, such as HIV / AIDS. With aggressive marketing methods and extra large bottles – the content of a standard bottle in Africa is usually 0.6 to 0.75 liters – which encourage people to drink as much Heineken as possible.

The brewer does not see the problem: ‘Our company doctors have experienced the award as a token of appreciation for their many years of work in the fight against HIV and AIDS,’ responds a Heineken spokesperson. And Jacques Kuyf, chairman of the Amsterdam Dinner: ‘We look from our own perspective.’ The awarding of the prize to one of the four main sponsors does not create any apparent conflict of interest in the eyes of the organization: ‘Heineken has been supporting us since 1992 and has been as one of the first major Western companies involved in the fight against AIDS in Africa. We are very open about being a sponsor and we think that is no problem.’

The Global Fund, a fund that spends US$3-4 billion a year on the fight against AIDS, tuberculosis and malaria with the support of the Bill & Melinda Gates Foundation, gave a different signal last year after the revelations about Heineken in Africa. The fund put an end to further detail through a proposed partnership with the beer brewer.