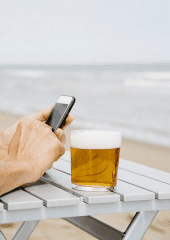 Minimum Unit Pricing (MUP) is a restrictive alcohol policy which sets a floor price of 50p per unit of alcohol, thus increasing the price of the cheapest, strongest alcohol favoured by the heaviest drinkers. In May 2018 MUP was introduced in Scotland as a response to Scotland’s struggle with increasing health, social and economic consequences of greater alcohol consumption when compared to the rest of the United Kingdom (UK). Average weekly unit consumption and rates of chronic liver disease and cirrhosis are much higher than in England and Wales and there are significant economic costs in healthcare provision, crime, and lost productivity. Thus, it was predicted that MUP would reduce deaths due to alcohol by 60, hospital admissions by 1,300 and crimes by 3,500 in the first year alone. We conducted a piece of research to assess responses to the introduction of MUP via comments made on Twitter. We analysed the common themes of these tweets and assessed which Twitter users were associated with which particular sentiments.

We pulled all tweets relating to MUP in the two weeks after the introduction of the policy. The tweets were investigated for their relevance to MUP, their sentiment (eg were they positive, negative or neutral about MUP?) and who posted them. In total, we collected 74,639 tweets were collected over 14 days. Of these 53,574 were relevant to MUP and demonstrated that opinion on the introduction of MUP in Scotland was very mixed. As far as we can tell from Twitter, there was a slightly higher proportion of positive posts (35%), with sentiment more positive in Scotland itself, than there were negative (28%) or neutral tweets (32%). These findings have mirrored previous survey data that suggested a higher proportion of the British public (particularly in Scotland) favour MUP than are against it, and that this is increasing.

When analysing the tweets, we found evidence of misunderstanding around some of the key policy issues, with many of the negative themes expressed on Twitter being similar to alcohol industry framings of the issues from earlier on in the public debate. For example, the most commonly expressed negative view was that MUP would not result in decreased consumption, when we know that alcohol is an elastic commodity with both consumption and harms decreased with increasing prices. While the alcohol industry attempted to stall the introduction of MUP through the courts, the alcohol actors we identified through Twitter continued to spread negative views of MUP in an attempt to sideline those arguments supported by peer-reviewed research. Notably, there was little activity by industry actors following the actual introduction of MUP, when the benefits of further obstruction were likely to be much more limited.

We also found much less variation in positive tweets than negative ones, and of these positive messages, 55% were originally made by health or alcohol policy-related individuals or organisations. This clearly showed a coordinated response by health care professionals and public health organisations focusing on a single message – that MUP reduces alcohol-related health problems. Naturally there are important implications for advocacy groups about the value of investing in social media to influence public opinion.

There are some limitations in our research, principally that Twitter is not representative of the general population. Furthermore, while the classification of Tweets was not done perfectly, the agreement between coders was very good. For further analysis, we recommend that you read the full paper published in BMJ Open and freely available online: