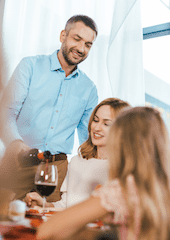 The results of a research study I conducted – with Anne Marie MacKintosh from the University of Stirling and Professor Linda Bauld from the University of Edinburgh – were published in the journal Alcohol & Alcoholism. They showed that children can experience negative outcomes as a result of their parents’ alcohol use – including the children of moderate drinkers. More than a third (35%) of children in a survey of almost 1,000 UK parents and their children aged 10-17 reported at least one adverse consequence – like being made late for school or arguing with your parents more than usual – as a result of their parents’ drinking. Most of our sample of parents reported drinking within the CMO’s low risk drinking guidelines.

Where does this leave us? We already know that the home is a key site where children learn about alcohol, and these findings show not only that children of even moderate drinkers are experiencing harm through their parents’ drinking, but that children are connecting these instances to alcohol.* So I believe this research should act as a call to action for the government; they should update their advice published for parents to include these findings to ensure parents are equipped with the most up to date information to make informed decisions that are right for their children – all families are different. The Alcohol and Families Alliance (AFA) makes such a call in their Families First report, which I support.

But these findings are only a small part of what we know about how we might protect children from alcohol harm. So, I would support the government in taking more decisive action:

* We asked children not just if they had experienced the negative impacts that we presented to them, but whether these had occurred as a result of their parents’ drinking.