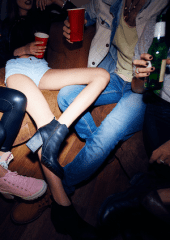 Though adolescent alcohol use has decreased across Europe and the US in recent years, it still remains a major public health concern both in terms of its impact on adolescent development and on their future health. However, regulations on alcohol are typically less stringent than those on (for example) tobacco, and unlike tobacco, there is no international framework convention on alcohol control, as some have called for. National governments have implemented various policies to try and tackle alcohol harm. These measures can be divided into three major groups: restricting alcohol availability, regulating alcohol advertising, and controlling alcohol pricing.

With a sample of more than 670,000 adolescents aged 11, 13, and 15 from the 33 European and North American countries and regions which participated in the 2001/02, 2005/06, 2009/10, and 2013/14 surveys of the Health Behaviour in School-aged Children (HBSC) study, we carried out a study to analyse the association between national alcohol control policies and adolescent alcohol use. Control policies included regulating the physical availability, advertising, and affordability of alcohol. In addition, given that minimum legal drinking age is the most common measure in the physical availability category, it was examined separately. Finally, in order to assess the effect of a combination of alcohol control policy initiatives, a total alcohol policy index, combining measures of the stringency of restrictions on availability and advertising in a country, was also added.

We examined the relationship between these different policies and a range of adolescent drinking behaviours including lifetime consumption, weekly use, and lifetime drunkenness. We found that the combination of restrictions on alcohol availability with alcohol advertising regulations was associated with lower lifetime and weekly alcohol consumption. In addition, a decrease in affordability was related to a reduction in all three drinking behaviours. On the other hand, other individual policy measures taken in isolation, such as imposing a minimum legal drinking age, restricting alcohol availability, or regulating alcohol advertising, were in general not related to adolescent alcohol consumption in our study (the exception was that restricting physical availability seemed to reduce weekly consumption).

But we did not stop here, we wanted to go further. It is well known that alcohol consumption is influenced by income: rates of drinking are related to higher income, both at an individual and at a population level. However, with respect to adolescent drinking, evidence is inconsistent. So, our second aim was to explore whether socioeconomic inequality (assessed by family affluence and perceived family wealth) was related to adolescent alcohol use and whether these relationships changed over time. Our findings showed that adolescents from better-off families tended to have higher levels of lifetime and weekly alcohol consumption as well as for drunkenness. In contrast, perceived family wealth showed no association with lifetime and weekly alcohol consumption, but adolescents who perceived their families to be poor tended to report a higher frequency of lifetime drunkenness. Regarding trends, the magnitude of social inequality in lifetime and weekly alcohol consumption did not change over time, but the effect of family affluence and perceived family wealth on lifetime drunkenness increased across survey years.

Our last aim was to investigate whether there was a relationship between the policies governments pursue, socioeconomic inequality and trends in socioeconomic inequality in adolescent alcohol use. To the best of our knowledge, this is the first international study analysing these associations. Our data revealed that the combination of policies addressing alcohol availability and advertising was found to reduce the effect of family affluence on lifetime and weekly alcohol consumption (i.e. reducing the frequency of drinking relatively more in higher socioeconomic status groups which are characterized by higher levels of consumption). In addition, having a combination of policies was also found to reduce perceived family wealth inequalities in drunkenness as well as to mitigate the increasing effect over time of perceived family wealth in lifetime drunkenness.

In summary, this study provides an overview of the relationship between national alcohol control policies, material and perceived socioeconomic inequalities, and alcohol consumption in adolescents over a 12-year period. Alcohol pricing policy appeared to be the most successful single measure, which should be taken into account in discussions on alcohol taxation and minimum unit pricing. Otherwise, individual isolated policy measures seem to have no or only limited effect, but a combination of policies seems to be more effective in reducing adolescent drinking. Although socioeconomic inequalities in adolescent alcohol consumption have persisted and even increased over time, this study showed that combined alcohol control policy can help in reducing them.

Paraphrasing the World Health Organization in the Global Status Report on Alcohol 2018 ‘… the global burden of disease caused by its harmful use is enormous. Disturbingly, it exceeds those caused by many other risk factors and diseases high on the global health agenda‘. However, there is still a lack of an international framework convention on alcohol control, as with tobacco. We hope that studies like this one that provide evidence on what works and what does not in relation to adolescent alcohol use, can help in establishing appropriate alcohol control measures as well as prevention and health promotion actions at these ages.

Written by Eva Leal-López, member of the HBSC Spain team and PhD student in psychology.