More accurate estimates for the burden of Alcohol on the Ambulance Service: around 1 in 6 callouts in Scotland are alcohol relatedAdmin2021-07-08T10:04:02+01:00 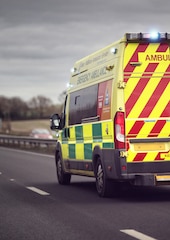 More than 16% of ambulance callouts in Scotland were alcohol-related in 2019. This is what we found in our new study using data provided by the Scottish Ambulance Service (SAS) and is three times higher than previous estimates. The burden was even higher over weekends (18.5%), peaking on Friday and Saturday nights when the percentage of alcohol-related callouts was 28%.

Alcohol constitutes a significant burden on emergency services in the UK, with the potential to undermine or delay emergency service provision to other incidents. This is also true for ambulance services, which often represent patients’ first – and sometimes only – contact with health services. However, there are concerns that current estimates underestimate the actual burden of alcohol for ambulance services.

In a collaboration between the University of Glasgow, SAS, University of Stirling and University of Sheffield, we developed a new approach to identifying alcohol-related ambulance callouts. The approach involves a new algorithm that is integrated into SAS systems to automatically identify alcohol-related callouts using electronic patient records. After every callout, paramedics complete a patient record including free-text fields regarding the circumstances of the callout and patient characteristics. By looking at the most frequent combination of words in callout reports, we built an algorithm capable of classifying ambulance callouts as alcohol-related or not.

This study adds to the evidence base around the impact of alcohol on society. Furthermore, these data can be used to monitor trends over time and inform alcohol policy decision making both at local and national levels. We are also aware of the potential of similar approaches in other contexts (e.g. ambulance services outside Scotland) or agencies (such as the police) doing similar work.

This work is part of the IMPAACT (The Impact of Minimum Unit Pricing of Alcohol on Ambulance Call-outs in Scotland) study led by Professor Niamh Fitzgerald at the University of Stirling. The work was funded by the Scottish Government Chief Scientist Office (HIPS 18/57) and published in the International Journal of Environmental Research and Public Health.