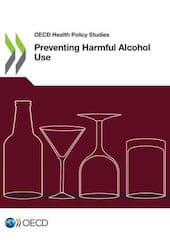 Prior to COVID-19, one in three adults engaged in binge drinking at least once in the previous month, and one in five teenagers experienced drunkenness at age 15 in  OECD countries. During the 2020 COVID lockdowns, people have changed drinking habits shifting places of consumption from bars and restaurants to home. Some decreased their alcohol consumption and others increased, for instance to cope with stress. Women, parents of young children and individuals with depressive and anxiety symptoms were among those reporting the highest increase in alcohol consumption. Problems associated with harmful alcohol consumption, such as domestic violence, also increased.

Harmful alcohol use is a pressing public health issue and has important consequences for individuals, society and the economy. This is what we show in the new OECD report ‘Preventing harmful alcohol use’, focussing on 52 OECD, European Union (EU) and Group of 20 (G20) countries.

Harmful alcohol use is a key driver of non-communicable diseases – such as alcohol dependence, cancer and liver cirrhosis, as well as injuries and premature deaths.

This estimate varies widely across countries, depending on the level of alcohol consumption and the provision of health care services for those in needs. The largest reductions in life expectancy are estimated in Central and Eastern European countries. As a comparison, preliminary data from Eurostat suggest that, in 2020, the COVID-19 pandemic was associated with a 0.8 year drop in life expectancy across 26 EU Member States.

Alcohol-related conditions have a significant cost to people and societies

Medical expenses to treat alcohol-related conditions equal about 2% of total health expenditure each year. At the same time, people living with these diseases are less likely to be employed, and when they work, they are less productive at work. Such labour market effects are expected to make GDP 2.1% lower than it otherwise would be on average across countries annually over the next 30 years. The greatest GDP impact (up to 4.5%) is predicted in countries such as Latvia, Lithuania and the Russian Federation (Figure 1).

Figure 1. The impact of diseases caused by harmful alcohol consumption on GDP

Specifically, the report identifies four areas in which advancements can make a significant difference.

Such a policy package would avoid 8.5 million cases of alcohol-related diseases every year across the 48 countries studied. Countries would also save about 28 billion USD per year, which is roughly the equivalent of the healthcare budget of Israel. Overall, for every USD invested in this policy package, 16USD will be returned in economic benefits, due to improved productivity, making a clear economic case for implementing effective policies.