The COVID-19 epidemic in the UK has disrupted every sector, every town and city and the lives of almost all of us. But it has also provided unique, perhaps never to be repeated opportunities to discover more about behaviour change and what causes it. Keeping people safe is government’s most important priority – safe from new infectious diseases but safe from other threats too, like violence.

Alcohol intoxication increases the chances of violent behaviour and although it also  increases vulnerability to violence in various ways, assailants are always culpable.

COVID lockdowns and easing of these major restrictions enabled my colleagues and I – using data on violence collected in hospital emergency departments – a reliable measure of violence causing serious harm, to address some key questions.

Were people in Cardiff, Wales’s capital city, confined to their homes for longer at increased risk of violence? Was the closure of clubs and pubs associated with reductions in violence? With greater availability of potential weapons in the home, was their use more prevalent? Were children more or less at risk when schools were closed?

This graph demonstrates trends in violence serious enough to result in emergency hospital treatment in Cardiff. 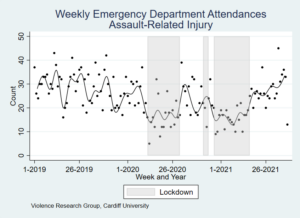 Overall, serious violence fell markedly in both major lockdowns and then increased markedly when these were lifted. By mid-September 2021 levels had returned to those seen in the same month in 2019.

Throughout 2019, 2020 and 2021 males were more likely to be injured in violence than females – as in previous years. Risk for males decreased markedly in both major lockdowns but remained largely unchanged for females. Easing of restrictions was associated with marked increases in violence risk for both genders. 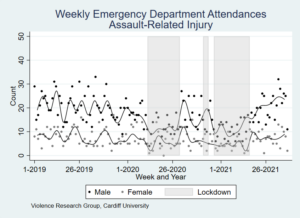 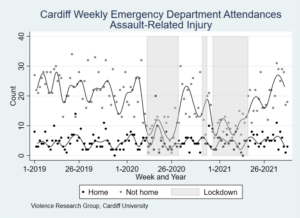 Violence in Cardiff 2019-21 in which children were injured

Surprisingly perhaps, the risk of violence for children also fell markedly during lockdowns, especially in the first lockdown in Spring and Summer 2020. Overall, school closure was associated with lower risk. 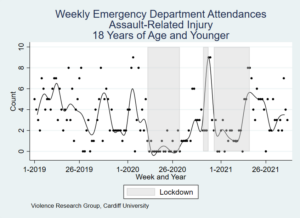 Over the same lockdown periods the incidence of weapon use did not change – reductions in violence were only associated with violence in which weapons were not used. 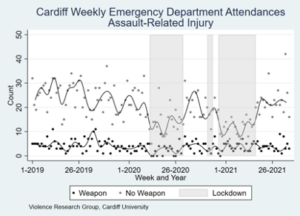 These findings are consistent with our detailed study, published in The Journal of the American Medical Association, of associations between the first lockdown and violence in which no significant changes among subgroups for injury at home in Cardiff were found. For violent injury outside the home, significant decreases were found among females younger than 18 years and among males in all age groups, those injured with weapons, and those in which the assailant was a stranger, acquaintance, or security officer (licensed premises door staff for example).

From this research, COVID lockdowns in which on-licensed premises were closed were associated with substantial reductions in violence outside the home but little change in the risk of physical violence in the home. Violence in which children were injured also decreased during lockdowns. Easing of restrictions was associated with increases in violent injury for both genders, and for children.

Overall, changes in the risk of violence in Cardiff were associated with environments outside the home rather than in the home; home environments were comparatively protective. These findings demonstrate that reducing on-licensed premises opening is a key to reducing violence. Although Cardiff is similar to other UK cities in several respects, these findings may not be generalisable.

The author gratefully acknowledges the help of Abigail Long of Cardiff and Vale University Health Board who shared the anonymised data from which Professor Simon Moore of Cardiff University kindly prepared the graphs.