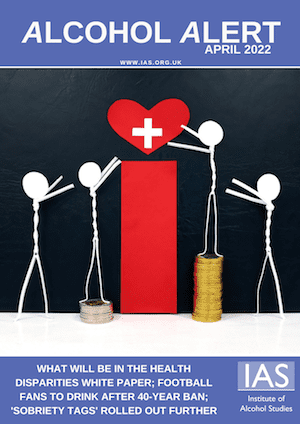 Following the February release of the Levelling Up White Paper*, the Government is set to publish a Health Disparities White Paper this Spring, which should set out how the gap in health inequalities will be reduced and how the Levelling Up plan of delivering 5 additional years of healthy life by 2035 will be achieved.

In our podcast we spoke to Alice Wiseman, Director of Public Health at Gateshead Council, about what could be expected from the White Paper, particularly in terms of alcohol. She said, “It’s really important that it’s a cross-government approach, if we don’t combine action across all wider determinants of health we won’t achieve the aspirations set out in the Levelling Up White Paper.”

The Health Foundation think tank has highlighted ‘Five tests for tackling health disparities’ within the levelling up agenda, including that there needs to be significant investment to support the proposals – which the Levelling Up White Paper did not include – and how a cross-government approach is crucial to success.

The Alcohol Health Alliance and IAS will be responding to the Health Disparities White Paper once it is published.

* A White Paper is a report that sets out proposals for future legislation. 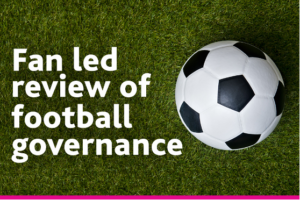 In November 2021, the Fan Led Review of Football Governance was published, which set out recommendations for how to reduce issues within the game, particularly financial issues. On 25 April 2022 the Government announced that it accepts or supports all ten of the strategic recommendations.

Within one of the recommendations is the suggestion to assess whether the current alcohol rules – established 37 years ago – are fit for purpose. The current rules mean spectators cannot drink alcohol in sight of the pitch in England’s top five leagues. The Review refers to the “perverse outcome” of being promoted from the sixth to the fifth league and it being unaffordable to the club due to not being able to sell as much alcohol.

The Government says it will consider the case for pilot schemes of the sale of alcohol in sight of the pitch, but that this “must be balanced against wider fan safety considerations”. They cited the “appalling conduct of some fans at the EURO 2020 final between England and Italy at Wembley Stadium” partly being driven by alcohol.

Chief Constable Mark Roberts of Cheshire Police, previously told Sportsmail that it was “madness” to lift the alcohol ban in stadiums during matches, highlighting a surge in arrests at football matches this season and the violence at Euro 2020.

There is very little evidence as to how a change in alcohol sales legislation at football stadiums would affect rates of violence. The University of Stirling is currently working on a number of studies on ‘Understanding the role of alcohol consumption in football cultures‘. The first of these was published in December 2021 and concludes that “alcohol regulations in some nations and sports – where restrictions are based on historical disorder – may no longer be appropriate”.

Focus on alcohol-related violence in football has predominantly been on violence in and around stadiums, however there should also be consideration of changes to alcohol rules potentially affecting domestic violence when spectators return home.

The Ministry of Justice has judged the rolling out of alcohol-monitoring tags “a success” and will therefore widen the roll-out to other people leaving prisons. More than 3,100 people have been fitted with such tags and it is estimated that by 2025 around 12,000 people will have had a tag.

This apparent success is based on compliance to wearing the tag, with the Government stating that over 97% of those on so-called ‘sobriety tags’ have not drunk while tagged. In January, Dr Carly Lightowlers wrote a blog for IAS on the topic, and highlighted that:

“A focus on compliance – in terms of alcohol-free days – is somewhat of a smokescreen as what is needed is evidence of whether drinking and related offending are reduced in the long term after tag removal, which is yet to be provided.”

Minister for Policing, Kit Malthouse, said, “It is not only protecting the public from the scourge of alcohol-fuelled crime – it also gives probation officers the chance to work with offenders to help them turn their lives around.” 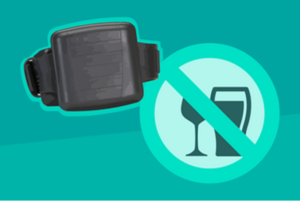 Councils to receive £85.7 million for drug and alcohol services

As part of the promise to implement the vast majority of Dame Carol Black’s drug review recommendations within its Drug Strategy, the Government has announced the allocation of £85.7 million to local councils in additional grants to improve drug and alcohol treatment services. The release lists how much each local authority will be given for ‘Drug strategy allocation’ and ‘Inpatient detoxification allocation’.

Local councils and their partners have been asked to provide plans to improve these systems, which will be agreed with the Office for Health Improvement and Disparities (OHID).

“People with drug and alcohol problems should be able to get the right support and treatment when they need it. Councils want to see vulnerable people being given another chance to find work, rebuild relationships and find safe and secure accommodation and will work with partners to improve the life chances of those impacted by drug addiction.”

It is not clear how far the Drug Strategy will go to support those needing alcohol treatment services, with references to drug treatment and support being the prevailing rhetoric. Conservative Minister Maggie Throup responded to a call for an Alcohol Strategy by saying that “the implementation of many aspects of the drug strategy will also benefit people seeking treatment for alcohol dependency”. MPs such as Labour’s Dan Carden continue to call for a specific Alcohol Strategy:

Every year, thousands of people die because of alcohol and many more are harmed. These harms affect children, families, communities and society.

To understand the scale of alcohol harm, I am calling for a Dame Carol Black style review of alcohol to inform a new Alcohol Strategy.

A University of Bristol study explored parental views and attitudes towards alcohol use during adolescence among their children and other young people.

In general, parents felt that it was inevitable that adolescents would drink alcohol, although they were aware of the risks and were mostly disapproving. Many parents therefore chose a “reluctantly accepting” approach. The researchers write that “This approach was determined by weighing disapproval of drinking against consistency with wider culture and parental behaviour, support for autonomy of the child, and avoidance of social sanctions.”

A key theme was that parents wanted to protect their relationship with their children, maintain an open, honest and communicative relationship, and ultimately limit risk and minimise harm. The researchers write that:

Following a recent publication that showed alcohol industry arguments were infiltrating World Trade Organization discussions (see our blog here), a number of academics have released a WHO Bulletin on non-communicable disease prevention policy and trade and investment agreements.

The analysis identified opportunities for protecting and promoting public health in trade and investment agreements, including: 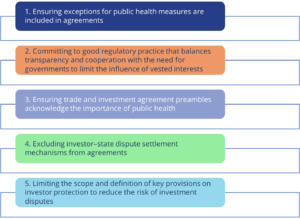 The researchers write that this analysis provides support for greater engagement between the health and trade policy sectors, and that a high level of health protection in trade and investment agreements requires cooperation between disciplines, and engagement with experts in law, economics and public health policy.

As part of the obesity strategy, from 6 April new rules came into force requiring calorie information to be displayed on menus and food labels for businesses employing over 250 people. The two exceptions are for food that is only on a menu for 30 days of the year or less and alcoholic drinks above 1.2% ABV.

Regarding alcohol labelling, Ministers are still stating that the consultation on mandatory labelling will “be launched in due course”.

In marketing news, the Committee for Advertising Practice (CAP) has announced that gambling and lottery advertising will no longer be allowed to use content “likely to be of strong appeal to children or young persons”. This will include “all sportspeople well-known to under-18s” – including topflight footballers and those with large social media followings – as well as people from reality TV shows popular with young people, and any references to video game content.

As Crouch says, if the grass looks greener – go and play on it.