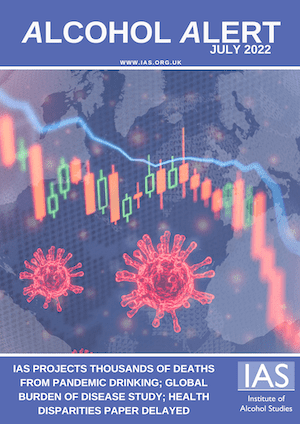 Shift in England’s drinking during COVID-19 could lead to 150,000 more cases of disease by 2035 Podcast feature

A new IAS and HealthLumen modelling study suggests changes in alcohol consumption during the COVID-19 pandemic are likely to lead to thousands of additional cases of diseases and premature deaths.

The pandemic saw heavier drinkers consuming more alcohol and this trend is continuing. If consumption does not return to 2019 levels or lower, England could see an additional 147,892 cases and 9,914 additional premature deaths from nine alcohol-related diseases, costing the NHS £1.2bn.

Three scenarios were modelled between 2022 and 2035 to project how recent changes in drinking may affect health harm from nine alcohol-related diseases: high blood pressure, stroke, liver cirrhosis, and six forms of cancer. The research found:

“Much of the health harm from alcohol is from chronic diseases which take years to develop. Our results shed light on the long-term impacts of recent changes in drinking patterns.

“These increases in alcohol harm, lives lost, and costs to the NHS projected in our study are not inevitable.

“Deaths from alcohol are at record levels, and this research should act as a ‘wake-up call’ to take alcohol harm seriously as part of recovery planning from the pandemic.”

A very similar modelling study by the University of Sheffield was published at the same time and backed up IAS’ findings. The Sheffield study looked at more diseases across a longer period of time, so projected higher alcohol-related deaths and hospital admissions.

Dr Boniface was interviewed on the BBC News, explaining the study findings and implications:

If you missed our launch webinar, where Dr Boniface and Sheffield’s lead author Colin Angus presented their studies, you can catch up on YouTube here.

The global burden of poor analysis

In mid-July, a new Global Burden of Disease (GBD) study was published in The Lancet. The GBD study is a long-running observational epidemiological study. Their new publication was widely covered in the media with most either stating that “alcohol is never good for people under 40” or “Young people should not drink alcohol but older people may benefit from small amounts”.

The senior author, Dr Emmanuela Gakidou, professor of health metrics sciences at the University of Washington’s School of Medicine, said:

“Our message is simple: young people should not drink, but older people may benefit from drinking small amounts.”

This is in contrast to their study four year ago, which said that even the occasional drink was harmful to health and suggested governments should advise people to abstain entirely.

Colin Angus wrote an IAS blog criticising elements of the study, for instance the study saying “older people may benefit from drinking small amounts” could be seen to suggest non-drinking older people should take up drinking for its supposed protective effects. Another major issue he flagged was that the study tells you “absolutely nothing about the difference in risks between age groups or the absolute risks that people are facing as a consequence of their drinking”.

In the media Mr Angus said:

“Younger people are, on average, much less likely to become ill or die from any cause than their older counterparts. Assessing how we should set drinking guidelines or prioritise interventions to minimise the total harm of alcohol requires an assessment of absolute, not relative risk.

“The GBD’s own figures suggest that there are over 14 times as many alcohol-attributable deaths in the UK among 70-74 year-olds than 20-24 year olds, which rather contradicts the assertion in this new study that we should focus on the drinking of younger age groups.”

But they call any risk above non-drinkers ‘harmful’, and so say young people should not drink. By this logic, they should not drive, or even get out of bed. No absolute risks provided, which breaks Lancet guidelines and provides no basis for policy recommendations. Awful. 3/3

Minimum pricing has never been promoted as a panacea

In the 22nd of July’s BMJ Editorial, IAS’ Dr Sadie Boniface discussed the new WHO report on minimum pricing policies for alcohol, explaining the report structure and stating that minimum pricing “is an effective part of the policy toolbox for reducing harm from alcohol”.

Following a number of recent reports that minimum pricing has failed in Scotland, Dr Boniface writes in the Editorial:

“Minimum pricing has never been promoted as a panacea, so arguments that it does not singlehandedly eliminate harm from alcohol can be rejected. Proponents do not claim, for example, that minimum pricing is enough to reduce alcohol consumption and harm among people who are dependent on alcohol, for whom the wider healthcare and support needs are obvious. Minimum pricing is one policy in the toolbox, needed alongside others as part of a coherent strategy.”

Dr Boniface discusses what a coherent policy landscape would look like, with population level policies implemented, effectively monitored and evaluated, alongside a suitably resourced and accessible healthcare system offering support. She explains that policies have to be independent from industry influence, an influence which remains a major challenge to a coherent approach.

According to real estate consultancy Altus Group, there were 39,970 pubs in June, down by more than 7,000 since 2012. Altus said after struggling through Covid the industry now faces soaring prices and higher energy costs.

Altus said that pubs which had “disappeared” from the communities they once served had either been demolished or converted for other purposes, meaning that they were “lost forever”.

A 2017 IAS publication found publicans often attributed pub closures to failures of their managers who are unable to respond to shifting consumer expectations. It also found supermarkets undercutting pubs in price was the major threat to pubs’ commercial viability. As shown below, the gap between on and off-trade consumption has been steadily widening for many years:

Another reason for pub closures is consolidation of business into bigger bars. This ONS report in 2018 showed that while small pubs were closing, big pub chains were consolidating business, with employee numbers and overall revenue remaining relatively constant

The Health Disparities white paper – due to be published in late July – has been delayed for the summer and will only go ahead if given the green light by the new Prime Minister.

The white paper is set to include further legislation to increase alternatives to tobacco products and increase alcohol-free products in pubs.

“In recent weeks charities and other health groups have been pushing for the paper to introduce preventative measures and measures that have a population wide focus. Sources said there was a risk that a future pm could drop this agenda – although pointed out that the policies had been framed as “non-nanny state” – perhaps to try to make sure it had Cabinet support.”

The white paper is said to include a change to the classification of no and low alcohol beers. Currently no-alcohol has to be 0.5% or lower and low-alcohol 1.2% or lower. This could rise to 1% and 3% respectively.

The change is said to be designed to help people cut down alcohol consumption “by helping brewers make low-strength options more appealing”.

Professor Sir Ian Gilmore, chair of the AHA, suggested that more evidence was needed on low-alcohol products but said “if it could be done in a way without brand promotion, we would be supportive”.

However, Gilmore said the plan was “tinkering round the edges” and that the government had “consistently put its head in the sand on evidence-based policies that have been shown worldwide to reduce harm”, mainly by increasing prices and reducing availability.

While being question by the Liaison Committee about his handling of the conduct of former deputy chief whip Chris Pincher, Boris Johnson said there’s a problem with alcohol in Westminster and that “some people simply can’t take their drink”.

Johnson said "some people simply can't take their drink", to which Conservative MP @CarolineNokes asks "have you just sat there and just told us that alcohol is an excuse?". pic.twitter.com/ranfFBDgdu

Conservative committee member Caroline Nokes MP asked him “have you just sat there and told us that alcohol is an excuse?”, to which Boris disagreed.

In the resignation letter of parliamentary private secretary Mark Fletcher, he wrote about the Pincher assault:

“You suggested that the events of that night were the fault of the colleagues who were present for allowing him to drink too much. Such a view seems to me an attempt to absolve Mr Pincher of his actions and, in so doing, to be an apologist for someone who has committed sexual assault.”

Ian Hamilton, of the University of York, wrote in the Independent that alcohol should not be used as an excuse for predatory sexual behaviour as this displaces responsibility from the perpetrator. He wrote:

“While the victim is left with the impression that it was the drug rather than the person responsible, the perpetrator tries to evade taking responsibility for what they did. This hardly gives anyone hope that this predatory behaviour will change. Even if predators become abstinent from alcohol, this won’t magically displace their thought processes and perception about what is permissible and what isn’t, in relation to others.”

On 7 July the Commons debated the proposed reform to alcohol duty, with discussion of its impact on the alcohol industry – particularly the wine industry – dominating proceedings.

Welsh Conservative Alun Cairns opened the debate and asked for “minor adjustments” to the strength bands and Small Brewers’ Relief.

Various other MPs spoke of the new system being too complicated, with too many tax bands, and how wine producers will find it difficult as wine strength is dependent on the weather.

Liberal Democrat MP Daisy Cooper said: “Overall, the alcohol duty reforms proposed by the Government just tinker around the edges in dealing with the pressures facing hospitality”, seemingly not recognising the importance of the public health element of the reform.

Shadow Exchequer Secretary, Abena Oppong-Asare MP, said Labour agrees the system should be simplified and be more consistent, and be balanced across public health and supporting business. She said the wine bands should be looked at, as the new system has too much red tape, as should changes to beer duty which currently would help bigger brewers more than small brewers.

Oppong-Asare went on to point out the cider exceptionalism, with it having a lower rate than beer in the proposals, and asked the Treasury to explain why this is when strong cheap cider causes so much harm.

Financial Secretary to the Treasury, Lucy Frazer MP responded to the majority of the concerns and said they will be looked into. She did highlight that public health was a major reason for the reform.

A new Stirling study has highlighted the impact alcohol packaging has on capturing the attention of and creating appeal among young people.

50 current drinkers aged 18-35 participated in 8 focus groups, in which they were asked about a range of alcoholic products.

“Five main themes emerged from our data: the ubiquity of alcohol packaging; its appeal and ability to catch attention; its association with particular occasions and activities; its ability to inform perceptions; and its engagement of both visual and non-visual senses – taste, touch, sound and smell.”

Notably, some participants reported purchasing alcohol products solely on pack appeal, with one saying: “I don’t actually like beer, but I bought it specifically because I liked the packaging”.

Drinkers preferred exclusive-looking “limited edition” packaging over large price marks portraying the drink as value for money, as they felt value drinks were inferior. Most retained expensive or “cool” empty bottles for display or collection.

“This study demonstrates that the packaging of a product is designed to appeal to different audiences, something that would ring true across all forms of marketing and is not in itself a surprise.”

He added that the group’s code of practice ensures alcohol is not marketed inappropriately and highlighted how adherence to the code had contributed to “over a decade of decline in underage drinking in Scotland”. 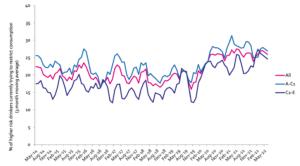