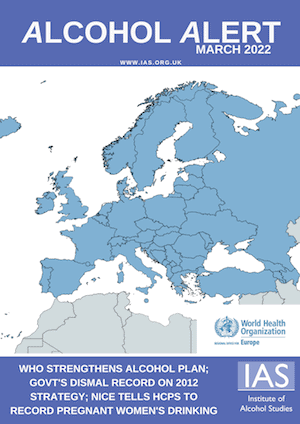 This scheme will provide funding for innovative research ideas that can help inform public policy debates on how to tackle alcohol harm. Priority will be given to proposals that align with our organisational objectives, as outlined in our Strategy 2020–2023.

Please send to relevant contacts. More details and how to apply are here.

WHO Europe looks to strengthen implementation of alcohol Action Plan

WHO Europe consulted on the draft of a new Framework, which aims to strengthen implementation of the WHO European Action Plan to Reduce the Harmful Use of Alcohol, 2022 – 2025.

The Framework includes recommendations for Member States on how to implement the Plan and Actions of the WHO Regional Office for Europe, on each of the following six focus areas:

WHO Europe will now finalise the draft and submit it to the WHO Regional Committee for Europe at its 72nd session in September 2022.

On 23 March 2012 the UK Government launched its Alcohol Strategy, with the then Prime Minister David Cameron highlighting the harm caused by alcohol and stating that “We can’t go on like this. We have to tackle the scourge of violence caused by binge drinking. And we have to do it now.”

A decade on, public health actors and politicians are drawing attention to the inertia over the last 10 years, with the majority of the planned initiatives being scrapped or barely implemented.

Labour MP Dan Carden says that lives lost due to alcohol could have been saved if the Conservatives hadn’t scrapped plans for minimum pricing of alcohol (MUP), one of the key parts of the Strategy’s plan to increase the cost of cheap, high-strength drinks.

➡️ The highest number of alcohol-specific deaths on record
➡️ Addiction services decimated by cuts
➡️ 300,000 children living with an adult who drinks at a high-risk level

As well as MUP, making health a local licensing objective and banning multi-buy promotions of alcohol were also planned but scrapped by the Home Office in subsequent years.

In a recent IAS blog, Head of Research Dr Sadie Boniface wrote that these failures don’t “just reflect badly on the Government. Putting commercial interests ahead of health in alcohol policies – such as through freezing and cutting alcohol duty in recent years – has cost lives and widened inequalities”.

“With record alcohol-specific deaths, rising economic and social harms, and depleted treatment services, people are rightly asking why it has taken so long for the Government to bring forward a plan to tackle alcohol harm.

“We need to remove barriers to effective action, including the undue influence of corporate lobbyists on policy decisions. Government must finally put public health first. Lives depend on it.”

“The situation has never looked bleaker. We need a strategy with measures to stop the incessant promotion of alcohol, give consumers information on harms, and to properly fund alcohol treatment.”

NICE says pregnant women should be asked how much they drink

Earlier this month, the National Institute for Health and Care Excellence (NICE) published a quality standard that focuses on assessing and diagnosing foetal alcohol spectrum disorder (FASD) in children and young people.

Among other statements, the new standard states that women who are pregnant should be advised by healthcare professionals not to drink alcohol throughout pregnancy, and that they should be asked about their alcohol use and this should be recorded.

NICE dropped an earlier draft which suggested adding a pregnant woman’s alcohol consumption data to their child’s medical notes, with fears that women that may need help might hide their drinking.

Lia Brigante of the Royal College of Midwives said:

“As there is no known safe level of alcohol consumption during pregnancy, the RCM believes it is appropriate and important to advise women that the safest approach is to avoid drinking alcohol during pregnancy and advocates for this.”

Others have raised concerns about the guidance, with Claire Murphy of the British Pregnancy Advisory Service stating that:

“We remain concerned about the routine questioning of women throughout pregnancy on this issue.

“Our research shows women find antenatal discussions about alcohol – even when they don’t drink at all – can supersede other issues important to them, like their own mental health and wellbeing.”

Ian Hamilton of the University of York argued that considering the short amount of time in appointments, midwives and GPs risk missing other connected issues:

“For example, higher consumption of alcohol is often related to mental problems like depression and anxiety. It could be more effective to make that the focus of scarce appointment time – rather than going through tick-box-driven conversations about alcohol.”

The independent public body Audit Scotland, which looks to ensure public money is spent “properly, efficiently and effectively”, has said that the Scottish Government must have a clearer spending plan for its “complex” drug and alcohol services.

Scotland saw a marked increase in the number of alcohol and drug deaths in 2020 and the Government has announced £250 million over this parliamentary term to tackle drug deaths.

Audit Scotland’s report states that there needs to be more information from the Government about where the money was being spent and that this should be available in one place.

“This includes more clarity on the different funding streams, which organisations are receiving funding, the purpose of funding and how decisions are made on prioritisation and distribution of funding.”

“We’ve recently seen more drive and leadership around drug and alcohol misuse from the Scottish government.

“But it’s still hard to see what impact policy is having on people living in the most deprived areas, where long-standing inequalities remain.”

A Scottish Government spokesperson said they welcome the report and acknowledge the concerns. Regarding alcohol, they said, “We are working with Public Health Scotland (PHS) to improve alcohol treatment data, including the development of PHS’s surveillance system.”

In other Scottish news, a recent study by the University of Stirling has identified the major obstacles faced by local public health actors in seeking to influence the alcohol premises licensing system. These challenges included:

The researchers wrote that having a public health objective for alcohol licensing – a policy measure frequently called for by public health groups – may not “remove the need for effective local advocacy in a multi-centric system” and that successful advocacy may “involve diverse strategies and relationship building over time”.

Another Scottish study to come out in March was by Glasgow Caledonian University, which identified barriers people from the LGBTQ+ community face in accessing alcohol services. These included:

“Our report recommends that all staff working in alcohol services should receive LGBTQ+ diversity training and services should check they are reaching the LGBTQ+ community, and tailoring their services appropriately.”

The Health and Care Bill is in its final stages, having had its third reading in the House of Lords. It will now pass to the Commons for consideration of Lords amendments. One amendment that was withdrawn during debate was tabled by Baroness Finlay of Llandaff, in order to give the opportunity to discuss alcohol labelling requirements.

Many of the peers present gave their support, including Lord Bethell of Romford, who was Minister of the Department of Health from March 2020 until September 2021. He made clear that he thinks it is a moral obligation to give people more information so that they can make informed choices.

Lord Bethell also mentioned his time as Health Minister and the promises he made that the labelling consultation would be issued by the end of 2021. He therefore asked the current Minister to make “the very specific time commitment the amendment seeks”: no later than 1 year from the Act passing.

Earl Howe responded that “The consultation will be launched in due course” but that he couldn’t give definitive timings. In response Baroness Finlay withdrew the amendment, saying:

“I note the tone with which “in due course” was uttered, which is really disappointing. I hope the Government will take the message back to the Secretary of State to empower him to grasp the nettle, provide leadership in public health and, for the first time, proceed to make sure that people know what they are drinking and what the harms are…we will hold the Government’s feet to the fire over what “in due course” means; I hope it is a very short course.”

A study in the United States looked at data from the US National Survey on Drug Use and Health, to examine the association of alcohol use disorder (AUD) and workplace absenteeism each year.

It found that increasing severity of alcohol use disorder (AUD) was associated with an increased number of days of work missed due to sickness:

In total, workers with alcohol use disorder missed more than 232 million workdays annually. People with AUD represented 9.3% of the full-time workforce yet contributed to 14.1% of total reported workplace absences.

The study researchers concluded that:

“These results provide economic incentive for increased investment in AUD prevention and treatment, both for employers and policy makers.”

In the UK estimates for working days lost each year due to alcohol-related sickness stand at 17 million, at a cost of £1.7billion to employers.

This US research came at the same time that a study reported a 26% increase in deaths involving alcohol in the US, between 2019 and 2020. The researchers wrote that:

A Massachusetts’ study of UK Biobank data looked at the association between alcohol consumption and cardiovascular disease (CVD) risk. Observational studies have previously suggested lower CVD risk among light to moderate drinkers compared to those abstaining or drinking heavily.

This new research initially found the same, however the study found that those light to moderate drinkers had healthier lifestyles than abstainers. For instance they tended to engage in more physical activity, have lower BMI, and smoke less. Adjusting for these lifestyle factors, and using newer Mendelian randomization techniques, the researchers concluded that the relationship between alcohol consumption and CVD risk looks like this: 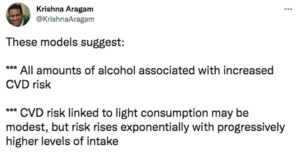 WHO looks to strengthens alcohol plan; Government’s “dismal record” on 2012 strategy; NICE says pregnant women should be asked how much they drink

Dr Aragam went on to say:

“These findings imply that alcohol intake should not be recommended to improve CV health and that reducing intake reduces CVD risk in all individuals.”