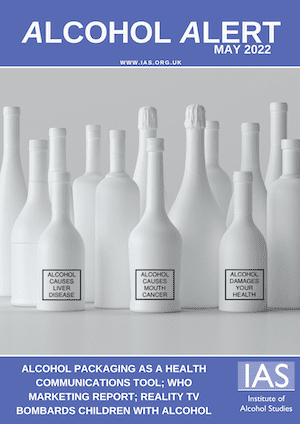 A study in April surveyed 1,360 people aged 18-35 to understand exposure and engagement with messaging on alcohol packs, as well as support for product and health information.

Participants of the study were asked questions about a vodka bottle that either had no warnings on it, small text warnings, or large text or pictorial warnings.

For this month’s podcast we spoke to lead author Daniel Jones, of the University of Stirling’s Institute of Social Marketing and Health, who explained that more research is needed for us to understand how effective product warnings could be in reducing harm:

“The warnings on products aren’t designed to be effective or engaging. There’s definite potential for better warnings to work and consumers are entitled to know what is in the products they are consuming.

Real life studies in the UK are required for us to understand the positive impact such warnings could have.”

WHO marketing report exposes loophole; Assembly agrees to action plan; and industry donations to the WHO Foundation

A comprehensive new report from the World Health Organization released this month highlighted the increasing use of sophisticated cross-border online marketing techniques for alcohol and the need for more effective regulation.

The publication – the first of its kind from WHO to look at the full extent of marketing across national borders – stated that such marketing happens “regardless of the social, economic or cultural environment in receiving countries”. It also showed that young people and heavy drinkers were often targeted by marketing.

“Controls on the marketing of alcohol are much weaker than for other psychoactive products. Better, well enforced and more consistent regulation of alcohol marketing would both save and improve young lives across the world.”

The report highlighted the issue of online advertising and difficulties regulating it, as well as sponsorship of sporting events, and targeting of young people and women. It concluded that national governments need to integrate comprehensive restrictions or bans of alcohol marketing in public health strategies. It highlighted key features and options for the regulation of cross-border marketing of alcohol and stressed the need for strong collaboration between states in this area.

In related news, during the World Health Assembly last week, delegates agreed to the 2022-2030 alcohol action plan to help implement the Global strategy to reduce harmful alcohol use.

The strategy has not been very effective, so the action plan proposes operational objectives and principles, key action areas for Member States and relevant partners, and sets global targets, indicators, and milestones for monitoring progress.

WHO Foundation should not accept alcohol industry donations

Perhaps suggesting a lack of policy coherence within the WHO, a BMJ Commentary piece published the week before the Assembly highlighted that the WHO Foundation – which was set up to fundraise for the WHO – does not reject alcohol industry donations and funding.

Initially alcohol industry gifts and funding were red listed along with arms and tobacco, but were moved into the orange category (judged on a case-by-case basis), and then seemingly removed entirely in January 2022.

The authors of the Commentary say that this exposes WHO to potential influence by the industry’s conflicting interests. They write that the Gift Policy lacks transparency, preventing scrutiny, and that such funding should be explicitly rejected.

“As improvements to the sustainability of WHO’s current financing model remain uncertain, safeguards against corporate influence must be strengthened. Clarification of WHOF’s policy not to accept donations from the alcohol industry is an important first step.”

Is it enough to reduce youth exposure to alcohol ads?

The Advertising Standards Authority published a report stating that children’s exposure to alcohol and gambling adverts on TV has decreased significantly over the past ten years:

The numbers are also segmented by country, with the average number of alcohol ads seen by children in England, Scotland, Wales, and Northern Ireland each week being 0.8, 0.9, 1, and 1 respectively.

However, a research publication released this month shows that reality TV “bombards” young people with images of alcohol use, drawing attention to the additional considerations regarding alcohol on TV.

Dr Alex Barker’s study looked at all reality TV shows that aired over the year from August 2019 and recorded any alcohol content either shown or implied. He found actual alcohol use was seen in 966 intervals across 212 episodes, with wine and champagne the most common type of alcohol consumed on screen. Using viewing figures, they estimated that alcohol content was seen 3.5 billion times by the UK population, including 197.3 million times by children aged under 16.

Professor Sir Ian Gilmore responded to the study, saying that:

“As alcohol is an age-restricted, health harming product, children and young people, in particular, should be protected from exposure to alcohol marketing on the television shows that they watch…the Government must introduce comprehensive restrictions to ensure that young people are protected from alcohol marketing in all its forms in TV programming.”

Read our blog by Dr Barker on the study.

Should people who are overweight have lower drinking guidelines?

At the European Congress on Obesity a study presented suggested that excess weight increases the chances of developing alcohol-related cancers. The authors used UK Biobank data to show that despite drinking within the 14-unit guidelines, those who were overweight or living with obesity were three times more likely to develop such cancers.

“Alcohol drinking guidelines should also consider the obesity levels of people. People with obesity, especially those with excess body fat, need to be more aware of the risks around alcohol consumption.”

“What is crucial is that people who drink alcohol understand these risks, and better product labelling and public health campaigns can raise awareness of this. It’s simply a case of people having the right to know the health risks of alcohol in order to make informed decisions about what they consume.”

“We believe in having clear information on pack that aids rather than alienates consumers. It is likely that having varied guidance for people would be confusing, counterproductive and also potentially patronising.”

The pollution of health discourse and need for effective counter-framing

Professor Nason Maani and colleagues from the London School of Hygiene and Tropical Medicine discussed the framing of health in public discourse in a BMJ Opinion piece, and how large commercial actors actively shape how health issues are framed to further their economic and brand interests.

Prof Maani explains that harmful product industries, from tobacco and sugar sweetened beverages to alcohol and fossil fuels, frame consumption as a matter of personal responsibility and freedom of choice, and focus on “downstream” treatment rather than “upstream” prevention efforts:

“These framings reduce faith in national and international regulatory agencies, undermine the public’s trust in science and evidence, and promote industries’ preferred solutions such as self-regulatory corporate social responsibility or “better regulation” as alternatives to effective public policy.”

He says to combat this we need:

The global alcohol prevention NGO Movendi International published an insightful paper at the beginning of May which looked at alcohol policy commitments by 32 European countries in relation to the sustainable development agenda.

Only 25% mentioned one or more of the WHO’s alcohol policy “best buys” among actions they are taking to reduce alcohol harm.

The study states its findings “show that these effects are not considered in the design of measures to achieve these goals”.