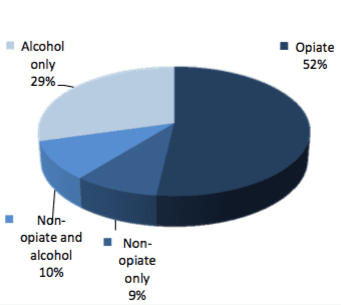 Drinkers in their forties make up the most number of alcohol only treatment users for substance misuse in England, according to new figures published by Public Health England (PHE).

The National Drug Treatment Monitoring System (NDTMS) report ‘Adult substance treatment activity in England 2015-16’ shows that in the 12 months to 31st March 2016, clients exhibiting problematic or dependent drinking represented a total of 144,908 individuals, second largest group in treatment (see chart, right). Of these, 85,035 were treated for alcohol treatment only and 59,873 for alcohol problems alongside other substances.

The overall number of individuals in treatment for alcohol fell by 4% compared to 2014-15, with the numbers for alcohol only decreasing by 5% since then, to reach its lowest total since 2009-10 (see below). However, this figure still represents more than double the annual number of alcohol only clients recorded since records began in 2005-06 (35,221 clients).

The report noted that those in treatment for alcohol only and opiates tend to be much older than individuals who have presented for problems with other substances. The median age of alcohol only clients was 45 years, with 68% aged 40 or over and 11% aged 60 years and over.

Roughly three-fifths of alcohol only clients were male (61%) although this was a lower proportion than those representing the entire treatment population in 2015-16 (70%). The report’s authors suggested that this finding is “likely (to) reflect the differences in the gender prevalence of problematic alcohol and drug use.” PHE will be releasing estimates of alcohol dependency late 2016.

Individuals starting treatment in 2015-16 were most likely to present with problematic alcohol use (62%, or 84,931 new clients) (see below). But alcohol only clients also had the highest rates of successful exits of all clients presenting for treatment, with just under two-thirds (62%) successfully completing treatment, up on 61% in the previous year. 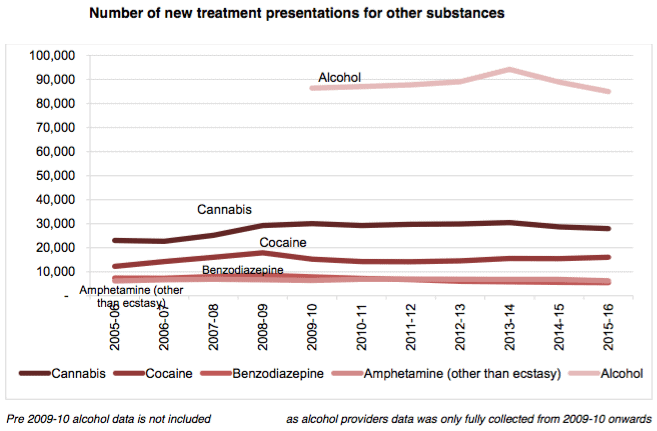 However, there were also more deaths among those accessing treatment for alcohol only problems; there were 817 deaths in 2015-16, 3% more than the previous year.

The report also noted that since alcohol service providers started reporting to NDTMS in 2005-06, alcohol citations have remained relatively stable, although the gathering of information on alcohol treatment service providers since 2008-09 may have been one of the main drivers of an overall increase in clients seeking treatment for substance use in general over the last decade.

“It is clear from the data that there is an increasing need for services to meet the complex needs of older more vulnerable drug and alcohol users in treatment as well as finding ways of helping those accessing services for the first time to get the treatment they need and move on with their lives.

“Within the data there is much to be hopeful about… But we certainly can’t be complacent – PHE, national and local government and providers, all need to enhance our efforts to ensure that treatment is a safe platform from which to achieve recovery.”