Alcohol related hospital admissions up by 69% since 2002

In answer to a question in the House of Commons, Dawn
Primarolo, the Minister of State for Public Health, revealed that the
total number of hospital admissions for alcohol-related disorders
increased from 510,173 in 2002/03 to 863,257 in 2007/08.

For adults aged over 26, the number of men admitted to
hospital due to alcohol exceeds the number of women by 70% (502,942 men
and 295,296 women) and men have shown a greater increase in the number
of admissions than women (74% increase for men and a 67% increase for
women).

However, at younger ages the difference between male and
female admissions is less, and for 10-16 year-olds, more girls than boys
are admitted to hospital due to alcohol. For young men, the rate of
increase in admissions appears to be slowing, and for boys aged 10-16
there was a decrease in the number of admissions between 2006/07 and
2007-08. The same cannot be said for young women and girls, for whom
admissions continue to rise. 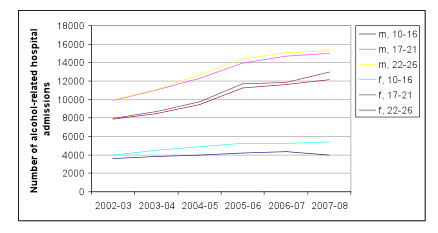 The complete set of figures is available here.