A new report from the Sheffield Alcohol Research Group, commissioned by the Scottish Government, estimates that alcohol taxes would have to rise by 28% in order to achieve comparable reductions in alcohol-related deaths to a 50p minimum unit price (MUP). Moreover, the report shows that such an increase in taxes would be a less targeted measure, raising the cost of alcohol for ‘moderate’ consumers by more than MUP.

The analysis addresses a key question at the heart of the ongoing legal challenge to the Scottish Government’s efforts to introduce MUP. In December, the European Court of Justice returned the case to the Scottish courts, tasking them with determining whether alternative measures to MUP, particularly alcohol taxes, can protect human life and health as effectively with less restriction of trade. The Sheffield report suggests that achieving the same ends through alcohol taxes would require dramatic and unprecedented rises – duty increases have rarely exceeded 5% in the past twenty years.

The researchers, using the influential Sheffield Alcohol Policy Model, suggest that a 50p minimum unit price would reduce alcohol-related deaths and hospital admissions by 7%. Moreover, it would do so at minimal cost to ‘moderate’ drinkers (those drinking below the previous low-risk drinking guidelines of 21 units a week for men, and 14 units a week for women). According to the model, MUP will have little effect on moderate drinkers, who will pay just £2 (0.5%) more and drink only four fewer units (1.2%) a year.

By contrast, the 28% increase in tax necessary to achieve similar gains for health would have a much more significant impact on moderate drinkers, who would spend £17 a year (4.4%) more and drink eight units a year fewer (2.6%). Moreover, tax increases would impose a much greater financial burden on hazardous and harmful drinkers (many of whom are already in poverty) to avert the same number of deaths. For example, harmful drinkers would pay £152 more each year under a 28% increase, compared to just £6 more under MUP. 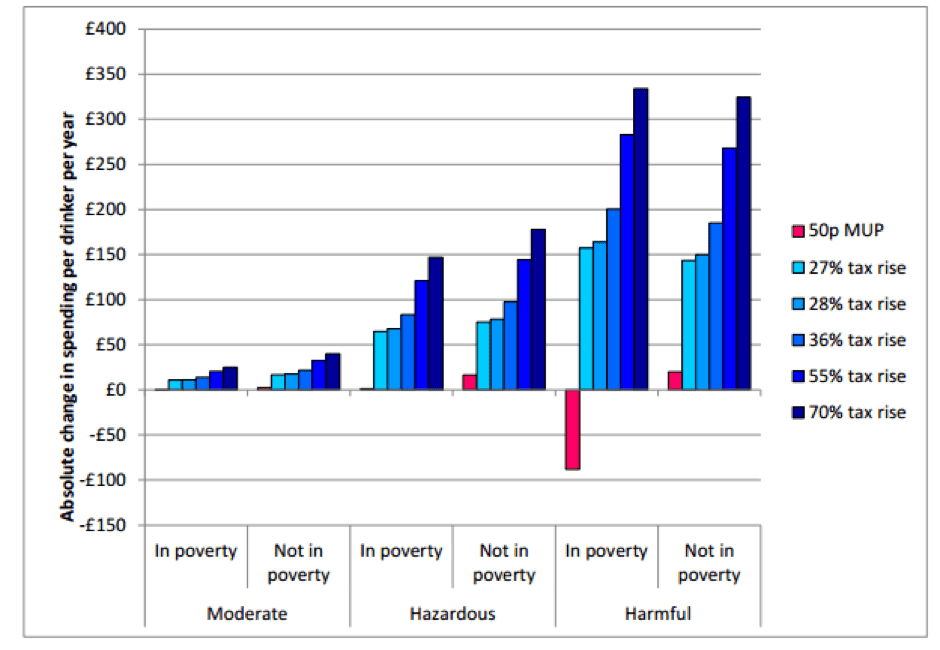 The report also found that MUP would do more than tax increases to reduce health inequalities, because it is more targeted at the cheap alcohol consumed by lower income groups. A 50p MUP would save 56 lives a year of those in poverty, compared to 28 for a 28% tax rise. By contrast, the majority of deaths averted from a tax rise would come from those not in poverty.

The final hearing for the minimum unit price case at the Court of Session in Edinburgh is provisionally scheduled for June.