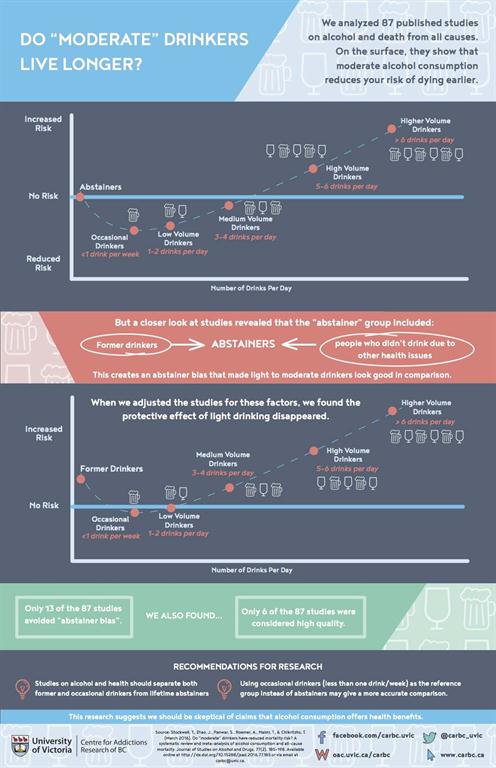 A new comprehensive study of drinking habits has found that there are no health benefits from moderate consumption of alcohol.

Published in the Journal of Studies on Alcohol and Drugs, the exhaustive review of nearly 4 million respondents from 87 studies has produced evidence that research has over-estimated the possible health benefits of alcohol and under-estimated its health risks.

Researchers at the University of Victoria’s Centre for Addictions Research of BC (CARBC) conducted a meta-analysis of 87 long-term studies on alcohol use and mortality. At first glance, the data showed that low-volume drinkers (those who had up to two drinks a day) had lower mortality risks than those who abstained from alcohol. Some studies have claimed that alcohol has protective health benefits when consumed at a moderate level.

However, once the authors – led by Professor Dr Tim Stockwell – adjusted for errors such as how “abstainers” are defined, they found that the protective effect of light drinking disappeared.

This new paper builds and expands on the work of a landmark 2006 study co-authored by Stockwell, which first highlighted how most published studies on alcohol and mortality make the mistake of comparing moderate drinkers to those who currently abstain. But “current” abstainers include many people whose poor health has led them to cut down or completely abstain. They make the health and life expectancy of moderate drinkers look good by comparison.

The study also found that before removing these errors, it was “occasional drinkers” consuming less than one drink per week who live the longest. The international team of authors argues that such a tiny consumption level is unlikely to provide any physiological benefits, and so occasional drinkers may be the best group against which to compare other drinkers.

“The bottom line is that we need to be more skeptical of claims that low-volume alcohol consumption is good for you, and take a long, hard look at how studies around alcohol and health are designed,” says Stockwell.

The authors also suggest that improved methods are required to make unbiased estimates of alcohol’s health impacts, and that although alcohol is recognised by international health authorities as a leading cause of preventable death, illness and injury, the extent of this is underestimated.

This could have major implications for the crafting of alcohol policies and for physician advice about low-risk drinking, Stockwell says.

“Do ‘moderate’ drinkers have reduced mortality risk? A systematic review and meta-analysis of alcohol consumption and all-cause mortality” available here.