The second provisional drink-driving dataset for 2014 produced by the Department for Transport has hinted that the number of people killed and seriously injured on British roads as a result of drink-driving has stalled since 2010.

“Reported road casualties in Great Britain: Estimates for accidents involving illegal alcohol levels: 2014” shows that between 210 and 270 people were killed in accidents in Britain where at least one driver was over the drink drive limit, with a central estimate of 240 deaths (illustrated below). The figure is unchanged compared with the final figure for 2013, following a period of stability since 2010. It also represents about 14% of all deaths in reported road accidents in 2014. 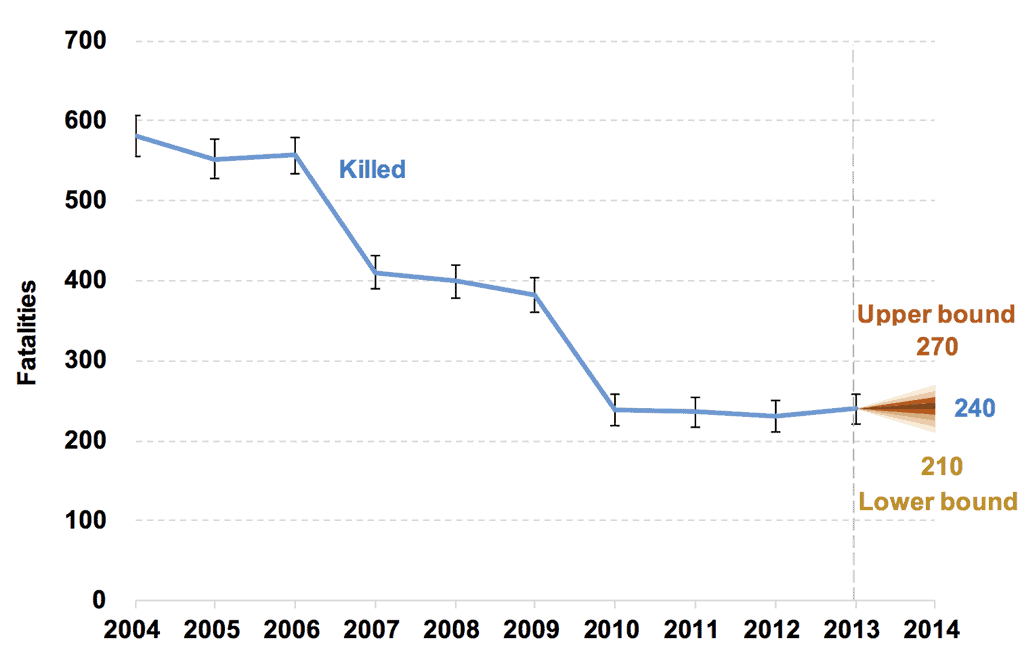 Recent polls published by both the UK Alcohol Health Alliance (AHA) and the motoring safety charity Institute of Advanced Motorists found that lowering the drink drive legal limit to 50mg/100ml is supported by an overwhelming majority of the British public (77% and 70% respectively).

Neil Greig, director of policy and research at The Institute of Advanced Motorists, said: “The latest drink drive statistics show that Britain is flat lining on drink drive deaths. Total numbers of drink drive accidents have gone down slightly but 20 people still die every month in an alcohol related crash – this is simply unacceptable.

“The government has increased the powers of the police to make it more difficult to avoid detection but they continue to avoid the one simple measure that could deliver fewer deaths immediately. That is of course a lower drink drive limit in line with Scotland. “We need to break the deadlock on drink drive deaths and a lower limit would send the strongest possible message that taking alcohol and driving is totally socially unacceptable in 2016.”

Professor Sir Ian Gilmore, chair of the Alcohol Health Alliance, said: “These figures show the significant harm done, both in terms of deaths and injuries, by drink-driving in the UK.

“It is worrying that the fall in the number of drink drive deaths has stalled, particularly when we know exactly what we need to do in order to reduce the number of fatalities. A large part of the solution is to reduce the drink-driving limit from 80mg alcohol/100ml blood to 50mg/100ml, something which Scotland has already done. Every other country in Europe, except Malta, has a limit at this level or lower and by reducing the limit in this way, over a hundred lives would be saved each year, and many more injuries would be prevented. While a small fall in non-fatal alcohol-related injuries is welcome, we cannot be complacent when we know that a simple measure that would bring us into line with the rest of Europe would prevent many more.”

Updated 2014 final estimates for casualties in reported drink drive accidents will be published in August 2016.