A new report from the Royal Society of Public Health (RSPH) urges the government to take alcohol as seriously as it does illegal substances. Supported by the Faculty of Public health (FPH), ‘Taking a new line on drugs‘ recommends that we should “recalibrate our understanding” of psychoactive drugs to reflect the reality that alcohol is more harmful to society than Class A drugs.

This would be best achieved by aligning alcohol, tobacco and illegal drugs strategies under the Department of Health’s lead – with ring-fenced funding transferred accordingly.

At £21bn and £13.9bn per year respectively, alcohol and smoking alone “cost society more than twice the £15.4bn associated with all Class A drugs combined, and our policy priorities should reflect this”, the report’s authors wrote. 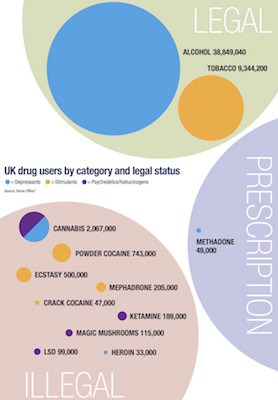 The report offers several stark facts about alcohol’s influence on users’ lives compared with illegal drugs, which are perceived to be more dangerous, despite “overwhelming evidence to the contrary.

For instance, there are more than 38 million drinkers in the UK, which according to Home Office figures is almost three times the number of users of tobacco, prescription drugs and illegal drugs combined (pictured). Naturally, as the most widely available of all drugs, alcohol causes far greater harm to health and wellbeing than many of its illegal counterparts at both individual and population level, being second only to tobacco in causing the most deaths among people in the UK.

And the report indicates that alcohol harms are worsening. The proportion of people dying from a range of alcohol-related causes remains significantly greater than it was 20 years ago for the UK as a whole, with a 19% rise in alcohol-related deaths in England from 2001 to 2012.

Alcohol causes greatest harm to others

Furthermore, while heroin, crack cocaine and methamphetamine were identified as causing the greatest harm to users, alcohol was found to cause the greatest harm to others “by a wide margin”: More than half of all violent crime in 2015 was alcohol-related; 1-in-6 road traffic deaths involves at least one driver over the legal alcohol limit; and diagnosed cases of foetal alcohol syndrome tripled in England over the past 16 years.

The RSPH report offers 5 key pillars of a health-led – rather than crime-led – approach to drugs strategy, and aligning it to alcohol and tobacco strategies tops the list. This would involve the transfer of lead responsibility for UK illegal drugs strategy to the Department of Health.

Wales has already adopted this approach, going so far as to adopt a united substance misuse strategy encompassing both alcohol and illegal drugs. Since doing so, Wales has seen deaths from drug misuse decrease by 30%, and alcohol consumption has fallen on all three measures: drinking above guidelines, heavy (binge) drinking, and very heavy drinking.