Longer-term trends show that the age-standardised death rate from alcohol-related has fallen in recent years. However, it remains much higher than 20 years ago, when there were 9.1 alcohol-related deaths per 100,000 population (illustrated below). 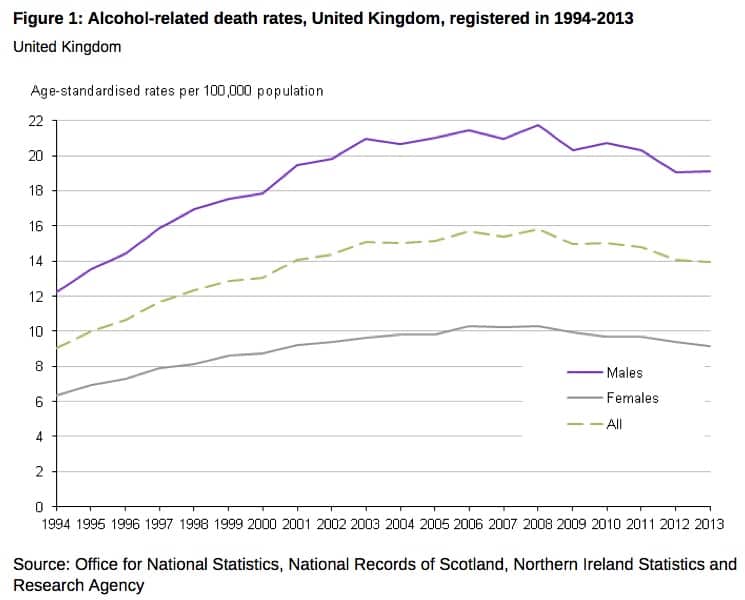 For both sexes, UK death rates were highest among those aged 60–64 years (45.3 deaths per 100,000 males and 22.4 per 100,000 females), alcoholic liver disease being the most common cause. Among that age group, the number of deaths from alcoholic liver disease alone in England and Wales has increased by over 50% since 2003. However, importantly these statistics show that 43% of alcohol-related deaths amongst men and 41% amongst females occur in those aged under 55, indicating that alcohol-related ill health is a major burden on adults of working age.

The figures presented by ONS provide a relatively conservative estimate for the number of alcohol-related deaths in the UK. An updated method for estimating the impact of alcohol on population health by researchers at the Centre for Public Health, Liverpool John Moores University found that in England over 21,000 deaths were caused by alcohol consumption in 2010.

The “Alcohol-related Deaths in the United Kingdom, Registered in 2013” bulletin presents the latest figures for alcohol-related deaths in the UK, its four constituent countries and regions of England. Comparisons are made between 2013, the latest year, and previously published data from 1994 onwards.