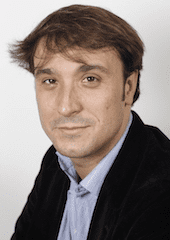 The recent release of data by Euromonitor suggest that alcohol consumption globally might have flattened. Specifically, consumption has declined worldwide to the point of a negative growth for the first time this century. This evidence is consistent with survey data for Britain suggesting that the proportion of people aged 16 to 24 who say they did not drink alcohol at all has increased by 40% since the last survey of this kind was conducted in 2005. These facts help to explain the below figure which reveals clear evidence of a declining trend in alcohol consumption per capita, peaking in 2004. The evidence is consistent with Danish data suggesting a reduction of yearly per capita alcohol consumption of as much as 25 litres from 1997 to 2011. Similarly, some other evidence suggests younger generations have substituted alcohol for other (possibly healthier?) alternatives. Millennials are less seduced by a large intake of alcohol, and more generally, data from the United States indicates that 2014 saw the lowest ever levels of alcohol consumption among teenagers since records began. 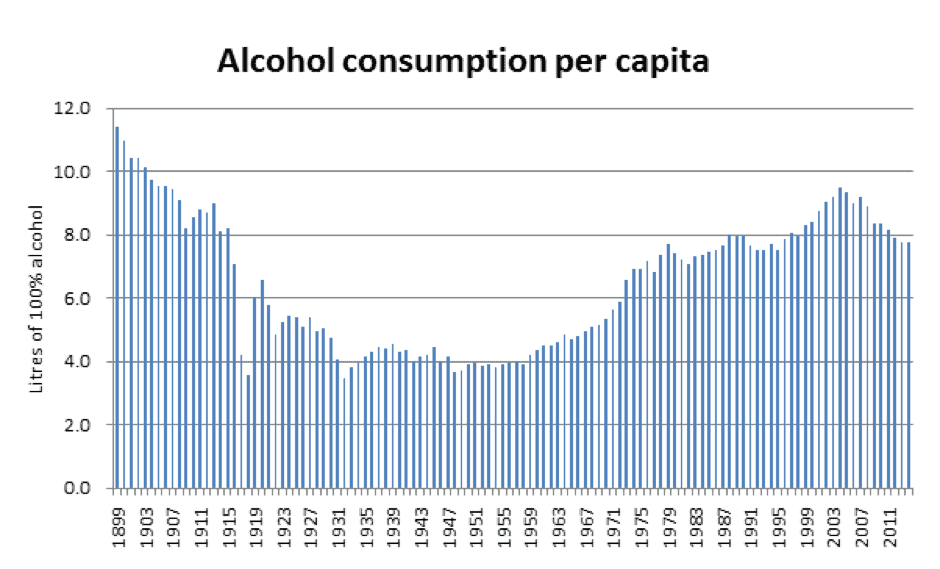 Yet, what are the underlying drivers of such a trend? One could examine both the short or long-term factors on existing consumers, as well as the effects on old and new consumers separately. However, it is possible to summarise those factors in three broad groups:

I argue below that the latter effect – which economists call cultural change – seems to be behind the continuing reduction in alcohol consumption, even though other effects such as policy and economic barriers to access also play a very important reinforcing role.

Nationwide evidence seems to indicate a generational change towards more moderate consumption and, in some cases, even abstention. For instance, one could cite the effect of health information campaigns on alcohol (e.g. the effects of alcohol during pregnancy), and more generally, policies that have acted as tipping points. I shall briefly address each one of these effects.

A well-established fact is that alcohol consumption is a ‘normal good’, hence it tends to increase with income, and lower income individuals are more likely to be abstainers. Hence, changes in the socio-economic composition of a population might discourage alcohol initiation, and more specifically, recessions are said to explain falls in consumption (e.g. the recent recession in China).

That said, it is unlikely that economic conditions explain alcohol consumption patterns alone. One reason is that they might instead lower the quality of alcoholic beverages. But more importantly, the drop in alcohol consumption observed in the data seems to have taken place prior to the recession (2004 in the UK). This is not to say that economic barriers do not matter. Taxes and price interventions can make a huge difference in moderating consumption, and more generally, in modifying long term consumption habits.

A second type of factor refers to the intended effects of policy interventions. This includes a number of policies, such as regulations clamping down on drink-driving, clinical guidelines discouraging women to drink during pregnancy, bans on drinking in public transport and on the availability of alcohol in some public places, to name a few. In addition, it is possible to cite unintended effects of other policies such as smoking bans in public places, which might have exerted knock-on effects on the socialising roles of drinking. The above policies in turn impact on the ‘social acceptability of an unhealthy drink culture’.

Too much alcohol is not cool anymore

This leads is to to the final explanation, namely the effect of culture; the reduced social acceptability or decline in the ‘coolness of alcohol consumption’. Culture explains, for instance, that Germany or Russia yearly consume 100 litres of alcohol per capita compared with only 3 in Morocco. In some western countries, alcoholic beverages are usually companions to foods, but can also serve to enhance people’s sociability, or can, for some – especially men – be used as a narcotic substance to cope with personal hardship. From an historical standpoint, alcohol consumption is intertwined with culture and tradition (e.g. champagne in every celebration). However, even within western societies, some groups have long taken pride of ‘being sober’ or ‘abstaining altogether’. Although it’s difficult to imagine the UK without its pubs, evidence suggests that there are 13% fewer pubs in the UK today than there were in 2002. Some of the traditional roles played by alcohol have been replaced by sport, therapy, etc. Finally, health campaigns, as much as other cited policy interventions, influence deeper attitudes and preferences towards viewing alcohol as a risky product.

We rely less on alcohol for socialising purposes than in the past. This is especially true among younger individuals, whose socialising habits are very different from that of their parents. The health-related consequences of alcohol overconsumption are more difficult to mask today than a few decades ago. Given that we expect to live longer, and prevention is the less costly route to being in good health, the value of health has increased with respect to other pleasures, and for some, excessive alcohol intake is not worth it. This does not mean alcohol will disappear from our lives, just that it might play a different role – a less relevant one perhaps – to the one it played in the past.